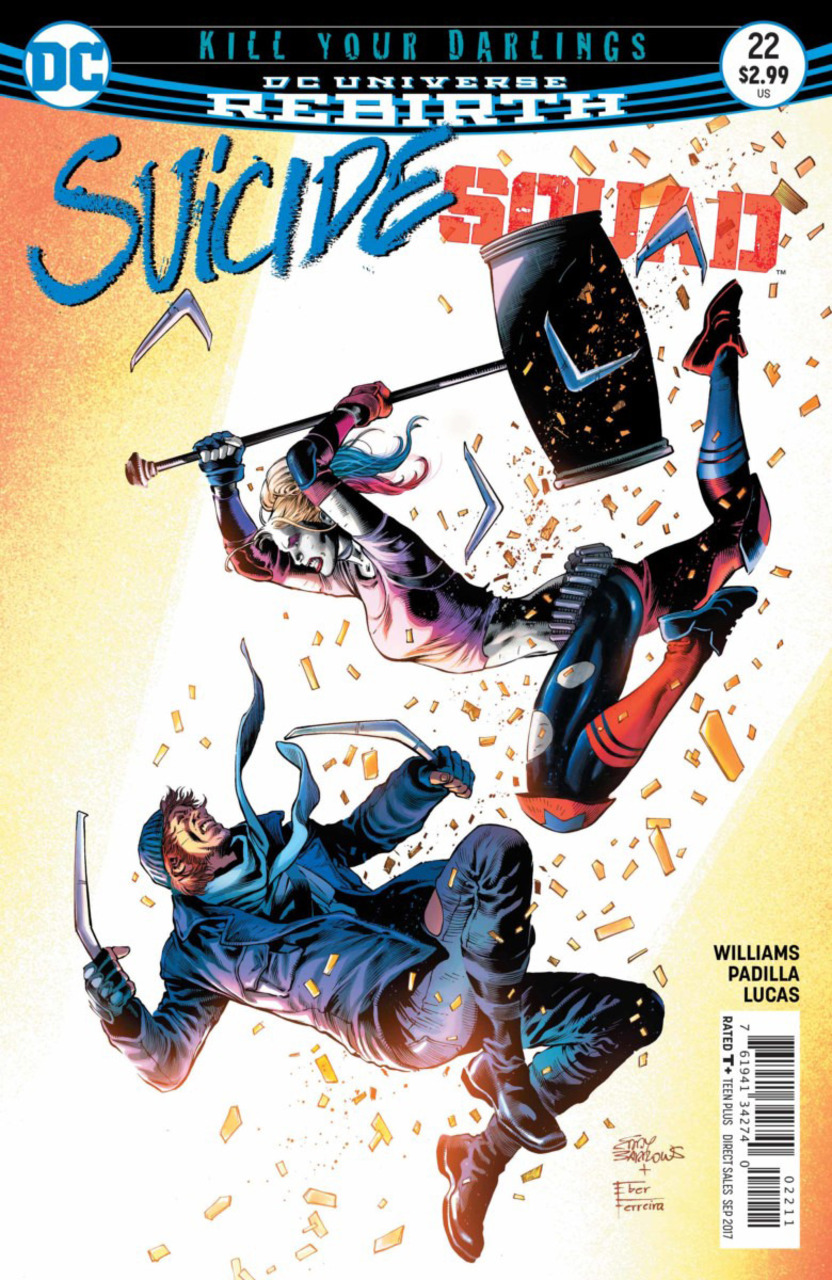 Overview: Harley gets the team out of a pickle and finds out who killed Hack, while Waller is captured and escapes from The People.

Synopsis (spoilers ahead): The team is standing around with four seconds left on the bomb. Deadshot has just put a bullet in Croc’s skull, while Floyd argues with Harley how he no longer wants to die… Katana notices that the bomb is still at four seconds. Just as Harley planned—the trauma of Croc being shot in the head has caused Enchantress to stop time, so that she can take as much time as she wants to torture Lawton. She begins tearing Deadshot apart while Harley lets Katana know that they are not her friends, and that she will sacrifice all of them to complete the mission. Harley takes this time to download Harcourt’s secret files, and finds out that Digger killed Hack.

Croc comes to—his skin has been bulletproof so far, so that wasn’t surprising, although Enchantress seems surprised. She stops killing Deadshot, and they all realize that there isn’t much time left before the place explodes. Digger is pretty far from the building at this point, and while huffing realizes that it should have blown up by now… and then it does. A portal opens up, and Harley jumps out of it, smashing Digger in the face with her mallet for killing Hack. She threatens to have Katana cut off his hands, but decides on leaving him to freeze to death.

Waller wakes up, tied to a chair. Direktor Karla begins praising her for her work. How it inspired him to build teams of criminals around the world to protect people from the Metahumans. That’s why they are called The People—they are here to serve them. He asks Waller to continue her work as normal, and that she work with him. He lets her free, and once Waller is outside, she makes it look like she escaped to save face.

Analysis: Rob Williams has stepped it up the last couple of issues. I doubted his choice of Harley Quinn as the team leader (which I still believe in the context of issue twenty, was bad. You said so yourself in the pages of that book and gave us reasons why she would have been a terrible choice), but it has shaken up the dynamic of the team in an interesting way. Quinn also is extremely ruthless, causing the book to live up to its name, or at least feel that way. I’m not sure if it’s because of the rotation of different artists coming up, but something recently has made a difference in Williams’ writing. I feel like he is no longer catering to the artists… that whole Zod arc still feels like a huge waste of time…

I’ve never seen Agustin Padilla’s work before, so I looked him up. He’s done lots of work for IDW over the years, a few things for Marvel, and a few issues for DC. I really liked the guy’s work. It was interesting. Very different from what we are used to seeing from DC. He has a similar style to Joe Madureira, which I know is not for everyone, but I enjoy it. It suits action extremely well, which is a good match for this type of book. The drawback is that it was inconsistent. His style did change from panel to panel. It goes a little more anime at times, and then a little more house style. There was also a panel where Harley’s eyes didn’t align with each other. However, I really liked what this guy brought to the table, and I’d like to see more of him.

Adriano Lucas does a solid job coloring here. I really liked all the greens he threw on the page with Enchantress—especially when she’s torturing Deadshot. I really liked the depth of colors throughout, and enjoyed his partnership with Padilla. It worked really well, and I hope this team comes back to this book soon. Pat Brosseau continues to do a solid job lettering. I liked the detail placed in the title card. The bullet holes were a nice touch.

Final Thoughts: Rob Williams is rebuilding my faith in this book… I just don’t know how to feel about it. It’s like a bad relationship at this point. But has Williams really changed this time? Is he now going to be better? The next few issues will be a good indicator.