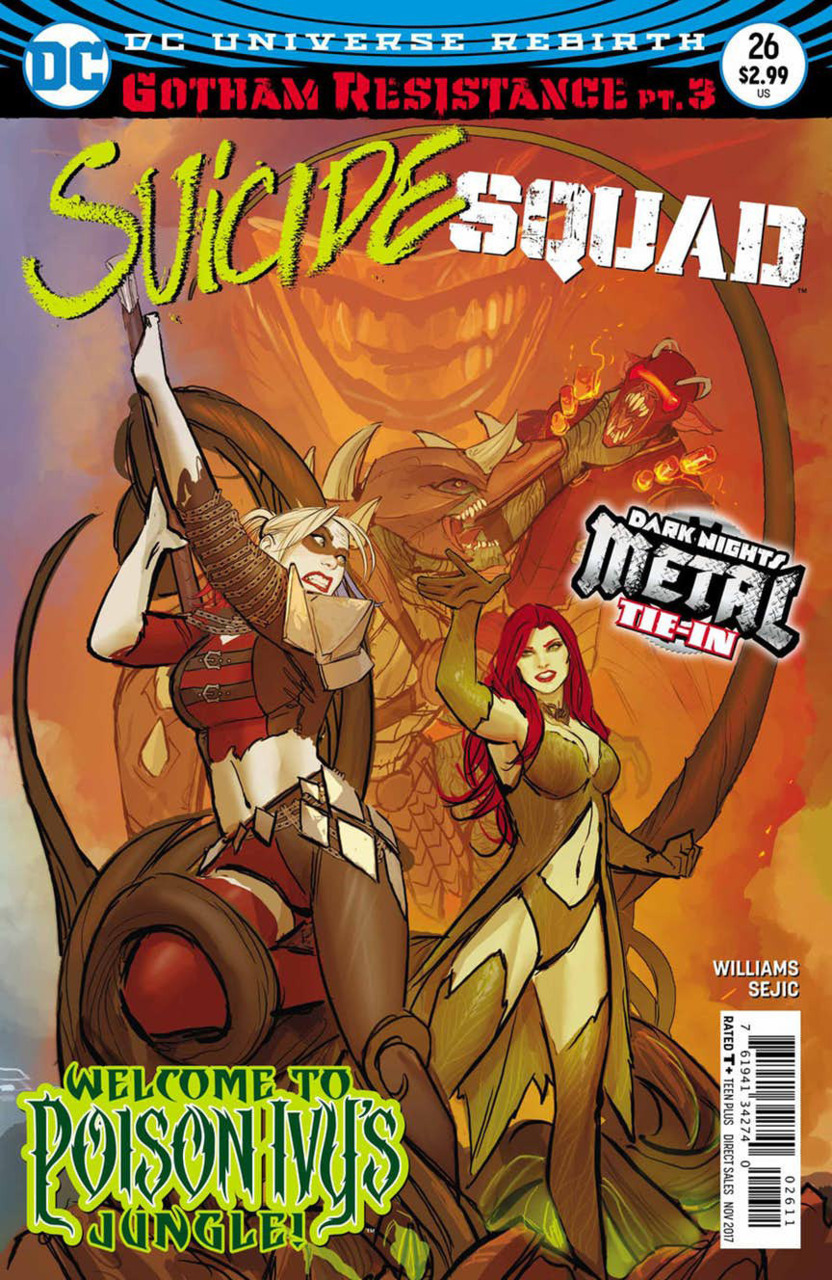 Editor’s Note: This issue is part of the Gotham Resistance crossover between Teen Titans, Nightwing, Suicide Squad and Green Arrow which started two weeks ago and continues through next week.

Synopsis (spoilers ahead): The issue opens with a flashback of Amanda Waller sending the Suicide Squad to investigate why a mountain has appeared in the middle of Gotham City.  The story then flashes though to the Gotham Resistance Team travelling through a wasteland on an old school bus while chased by an army of battle armor wearing Man-Bats.  The team escapes by Harley driving the bus off the side of a cliff.  The team ends up captured by a super powered Poison Ivy who orders her man-eating plants to kill the team, starting with Harley Quinn.  Ivy is interrupted by a demonic Starfire who has come to capture the team for the Batman Who Laughs and proceeds to set Ivy’s plants on fire and the team escapes by climbing up the side of the cliff.  The team makes it to the top and are ambushed by the Dark Robin and demonized members of the Suicide Squad and Teen Titans.  The cut on Nightwing’s forehead continues to bleed as he experiences visions of Batman.  A battle ensues which is joined by an enraged Poison Ivy.  The team makes their escape as Killer Croc takes on the Dark Robin as another floating metal ball reappears.

The Team continues thought the next section of Gotham which is controlled by the Mad Hatter.  Nightwing admits to Robin that he has had visions that lead him to believe that Batman is dead.  The team is then attacked by axe-wielding Tweedledee and Tweedledum who are then taken down from behind by Mr. Terrific as he makes his entrance.

Analysis: Much like the larger Dark Nights: Metal series that this tie-in spins out of, this issue is an exercise in Bat-guano craziness.  I’d like to again point out the image of battle armored characters in a converted school bus racing though a desolate wasteland while being chased by an army of man-bats.  This is the DC Universe as told though the lens of Mad Max: Fury Road and I enjoyed the hell out of it.

This issue is a lot more straightforward then the Teen Titans or Nightwing issues of this crossover.  Most of the heavy lifting is out of the way with, giving Williams plenty of room to just play in this new world that has been set up in the Metal storyline.  The Gotham Resistance storyline has to this point been structured much like a video game, with the characters entering these various worlds and facing a “boss battle” as they make their way to a final confrontation and to rescue Princess Zelda…  um… I mean Batman.  This issue makes the decision to jog through the worlds of Poison Ivy and Mad Hatter, which is  a decision I enjoyed as it kept the story moving, which is a good call as Gotham Resistance wraps up in next week’s issue of Green Arrow.

The decision to give all the members of the team battle armor doesn’t seem to be for any other reason other than as an aesthetic choice and its one that works, as it adds to the post-apocalyptic, heavy metal tone that the event in the main story seems to be going for.  As a whole the art by Stjepan Sejic is gorgeous and beautifully captures the world that they are setting up.  I particularly enjoyed the opening double page spread of the bus chase.

The only real criticism of this issue is that, much like the other issues of Gotham Resistance, it barely counts as an issue of the ongoing series.  Its not really a Suicide Squad story and the series continues to focus more on Nightwing’s journey then anything else as the story goes on.  That being said, there is an attempt in this issue to at least give Croc and Harley a few moments to stand out, such as when Croc sacrifices himself to face Dark Robin so the team can escape.  I also enjoyed Harley being unsettled at Poison Ivy’s behavior and at the increasingly mad but familiar world that starts to remind her of the Joker.

Final Thoughts:  Much like with most crossover events, I find that this issue, and Gotham Resistance as a whole, can’t be judged as an issue of the series it takes place in, be it Suicide Squad or anything else.  This issue improves on the previous two issues of Gotham Resistance and I’m looking forward to the story continuing in Green Arrow.