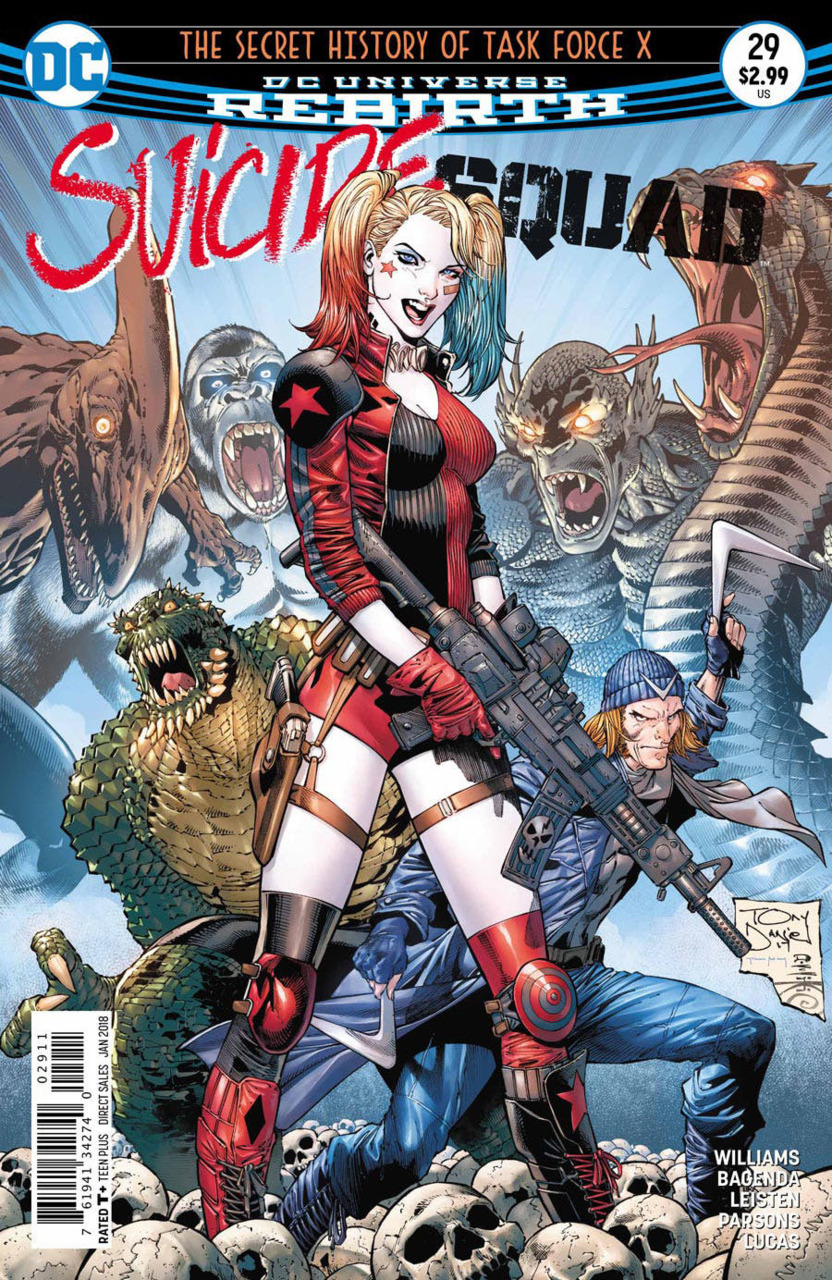 Overview: The Suicide Squad goes to the Moon to kill a monster.

Synopsis (spoilers ahead): The issues picks up on the moon where Katana and her team (Harley Quinn, Killer Croc, and Captain Boomerang) along with Rick Flag Sr are arriving in a space shuttle to a secret vault containing all the aliens that Rick Flag captured during the early days of Task Force X.  As they approach the vault, Flag has some sort of episode, as he cannot survive being away from the piece of the Red Wave Monster’s heart, which is still on the Argent satellite, without starting to age and die.  Flag is revived as they enter the vault, and explains that he plans to trigger the explosives that are rigged to the internal vault door containing the Red Wave Monster, destroying the monster.

Back on earth, at a secret abandoned military base, at Groom Lake, Nevada, Deadshot, El Diablo, and an unconscious Enchantress, along with Amanda Waller and her solders are trapped in the wreckage of an old plane as an army of killer robots fire at them.  Amanda Waller admits that she sent the team in as a distraction so she could get a hold of Argent’s old files and as one of the robots advances, one of Waller’s soldiers is taken over by an organic computer virus.  Waller wakes Enchantress by activating her brain bomb and Enchantress uses her powers to fly the wreckage of the plane.  Deadshot and Diablo sacrifice one of Waller’s soldiers to keep the robots busy as the group makes their escape.

Meanwhile, back on the Moon, the team continues deeper into the vault and come across dead bodies of former members of the original Task Force X, one with “Faraday Lied” written on its body. The bodies proceed to come to life and attack the squad, revealing to be possessed by red squid-like creatures, which the team fights off.  The issue ends with Flag admitting that he was lying to the team as he released the Red Wave Monster from it’s prison.

In the backup story, King Faraday’s journal continues with Flag Sr and the original Task Force X taking down various threats, leading to Task Force X’s mission to the moon, which Faraday narrates was when he knew that Task Force X had to die.

Analysis: Surprising to absolutely no one, Flag Sr is not what he seems, and appears to be controlled, influenced or otherwise involved with the now unleashed Red Wave Monster.  I can’t help but wonder what was really the point of this plot twist.  The book hasn’t spent enough time with Flag Sr for there to be any sense of betrayal at his villain turn here.  As stated in my review of the last issue, there wasn’t really any good reason given for the team to be going to the Moon in the first place.  As this issue demonstrates, the monster is still nicely locked away on the Moon until the team lets it out.  I think it would have made for a better story if Flag had simply hijacked the team to break into the vault and then reveal the monster as opposed to what’s been done here.

That being said, the scenes of the team inside the vault do a good job of calling back to films like Alien as they get closer to the creature and I appreciated that the team itself, Boomerang especially, calls out the fact that they are referencing movies like Alien or Prometheus and that he refuses to make the same mistakes that he has seen on screen.  Artist Baraby Bagenda does a great in giving these sequences a cinematic quality, especially in the end reveal of the Red Wave Monster, which feels like something out of Pacific Rim.  All in all, the moon sequences are a fun ride and make a good portion of the book a fun read.

The Nevada scene is where the issue stumbles.  The “Organic Computer Virus” reminds me of back in early 1990’s when movies, tv, and comic books threw around terms like “Computer Virus” in stories without any actual knowledge of what that actually is.  There’s no particular reason given as to why Waller would know that is what is happened to her soldier and the moment feels just plain silly.  The sequence ends with yet another reminder that “they are the bad guys” which feels like some sort of editorial note that the Suicide Squad at all times has to resemble or have some sort of familiar call back to the Suicide Squad movie so that casual readers will know what they are reading.  The moment is forced and nose dives the sequence into mustache twirling evil guy talk that makes the characters feel like cartoons instead of fully developed characters.

Final Thoughts: This is an uneven story with some fun, movie inspired moments. I feel like this book is at its best when its just letting the team go off on an adventure, but that it gets bogged down in making sure it stays true to being a “Suicide Squad” story.