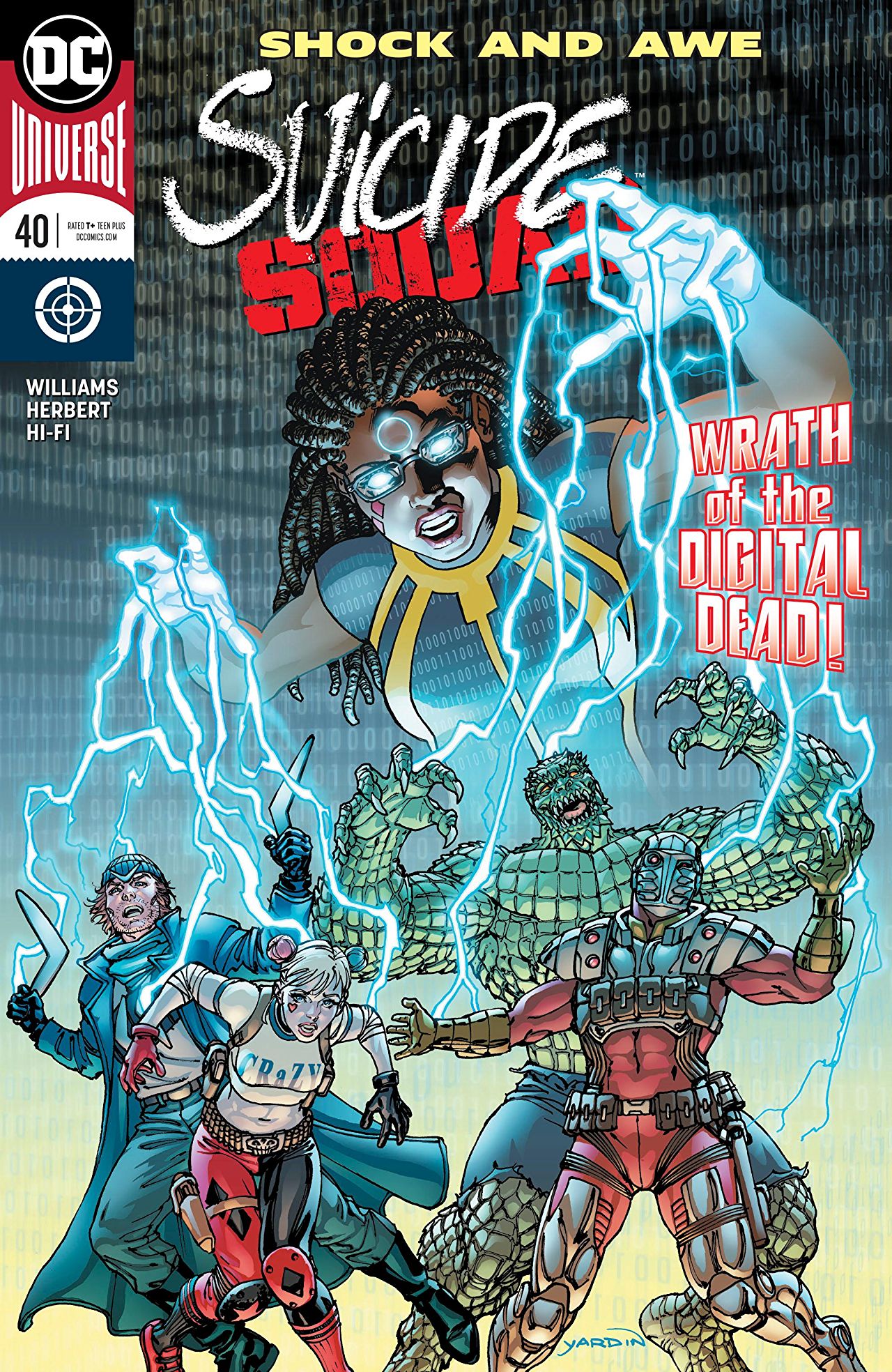 Overview: Amanda Waller faces off against the Wall as both Task Force X and her family hang in the balance.

Synopsis (spoilers ahead): The story opens with a flashback to a young Amanda Waller who falls in love, starts a family, and later is met with tragedy.

The story then flashes forward to the present where the Wall is in Waller’s daughter Coretta’s hospital room, saying that he’s going to kill her.  Waller’s sons tackle the Wall, damaging his energy gauntlet, injuring one of Waller’s sons in the process.  The Wall tells Waller’s family that if anyone leaves the room, he will detonate the nuclear power source in his suit, and that he will only let them live if Amanda Waller makes the choice for the Wall to release all the classified Task Force X documents that were downloaded by the Wall in the previous issue.

Amanda Waller arrives at the hospital, ordering the Suicide Squad to stay out of sight.  Waller tells Rick Flag that she knows that the Wall has been possessed by Hack and goes into the hospital to confront her.  Waller finds Hack/The Wall in her daughter’s hospital room, and Hack tells Waller to make the choice to release the classified files on her life’s work or to sacrifice her family for her secrets.  Waller takes a moment to hold her granddaughter for the first time and then tells Hack to release the files.  Hack tells Waller she will release the files and then fades away, her life force dying as the artificial intelligence circuits in the Wall fail.

The Suicide Squad crashes through the ceiling to find that there is nothing left to do but clean up.  The story then flashes forward two days, where it is revealed that Hack never transmitted the files, and even if she did, that the information in the files was a worthless decoy.  Amanda Waller is given control of Task Force X once again, with Rick Flag refusing to rejoin Waller.  June Moon is said to be believed dead, with Killer Croc a shell lying on the floor of his cell.  The issue ends with Waller leaving Katana alone, as Katana hears her Soultaker sword whisper Amanda Waller’s name as someone deserving of vengeance.

Analysis: Surprising absolutely no one, the big reveal is that the Wall is being controlled by Hack.  I again have to wonder what was the point of dragging out the Hack “twist”?  The story chooses to completely sidestep Hack’s feeling of anger and vengeance against her actual killer, Boomerang, and the Suicide Squad in general, and to have her sole focal point of vengeance be against Amanda Waller.  The story had an opportunity to have Hack confront her killer, only to interrupt and drop that plot point with no reference or explanation in favor of this drawn-out storyline.  It’s a missed opportunity to not have Boomerang, often left to the butt of jokes, actually suffer some sort of consequence for a terrible thing that he’s done and the fact that the book set up that storyline without any follow through is extremely frustrating, as is yet another story “reveal” that is ruined by the cover of the issue.

As for Amanda Waller, you can see that this is the storyline that the creators were actually interested in telling, and I will concede, that the idea of forcing Waller to chose between her children and her life’s work is an interesting one.  It’s a colossal cheat for the book to have the choice Amanda Waller makes have absolutely no stakes whatsoever.  Waller making the choice knowing that the information Hack was threating to release was worthless robs the moment of anything genuine and the fact that Waller continues to act without any consequences or having learned anything makes me wonder why anyone even bothered.

The problem with this book continues to be that it has no interest in straying from the formula.  Its as if there is some sort of mandate that every story will end with the team back in prison under Waller’s thumb.  There are so many stories that can be told with these characters and the continual return to that formula is frankly boring.  Have them break out… take over the prison… have Waller get thrown into prison with them… there are so many places that the book can go but refuses to do so.

The art by Jack Herbert does what it can to inject some emotion into the story, and Herbert’s character work does a decent job of conveying the emotion into the story that it clearly intends to convey.  The clear highlight of the art in this issue is the Francesco Mattina Superman variant cover, which is frankly gorgeous.

Final Thoughts: This book is uninspired and has no interest in stretching passed its formula and is in desperate need of a reboot.