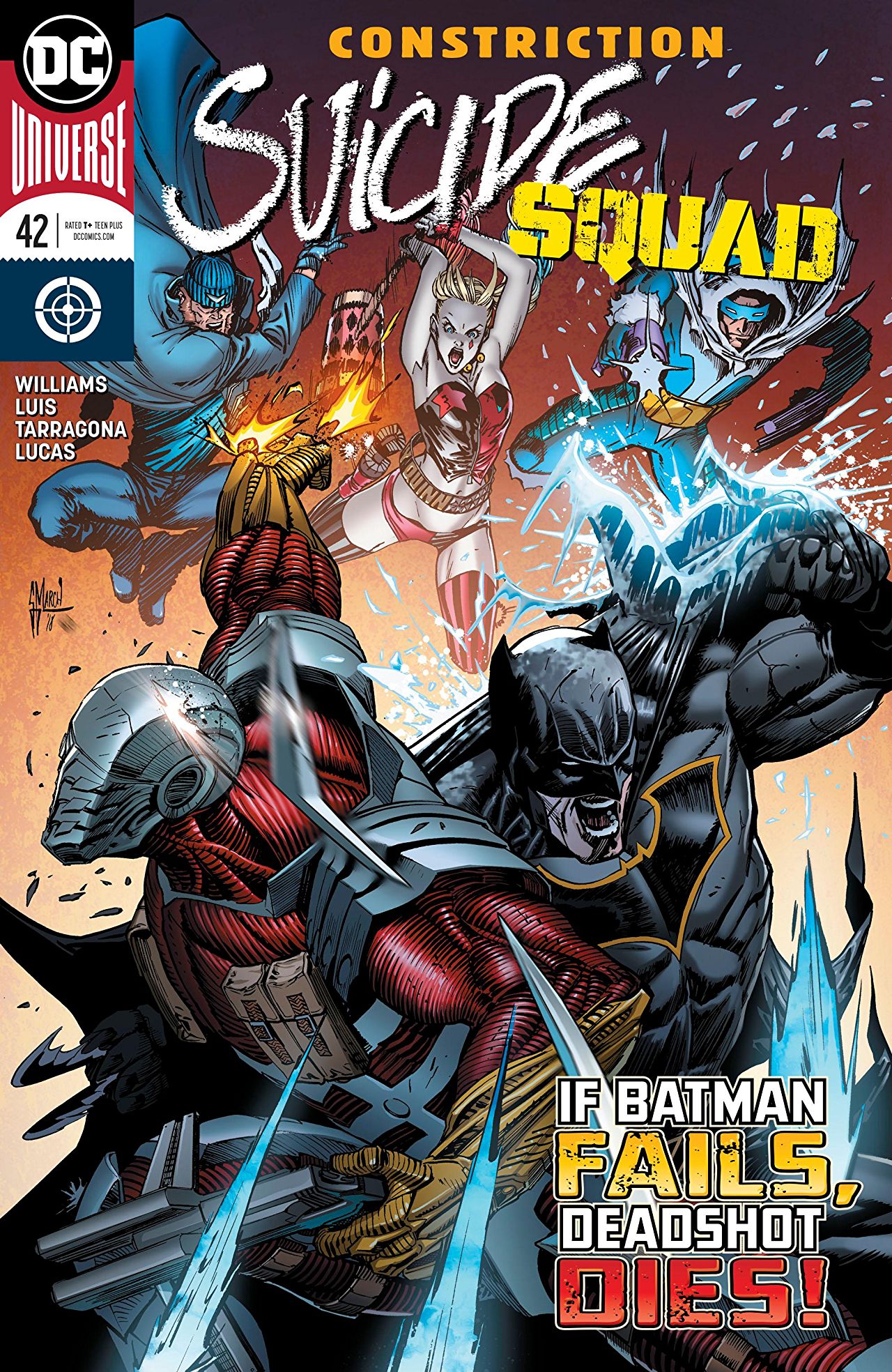 Overview: Batman and Deadshot are hot on Kobra’s trail looking to free Zoe Lawton, but the rest of Waller’s Squad is right behind them. Bringing their prey in alive is not a requirement.

Synopsis (spoilers ahead): So far, Batman seems determined to stay true to his word to help Deadshot get his daughter back. There’s a debt he needs to square with Lawton and it seems important enough to go against Amanda Waller. That said he’s also not simply letting Deadshot off the leash to kill indiscriminately. In fact, part of the deal is Deadshot can’t kill at all. As the two investigate a bar with Kobra connections in Texas (called, what else, The Snake Pit) Batman makes it clear that any fatalities on Deadshot’s part would be a deal breaker. This isn’t really a problem for the world’s best marksman. It’s more like a disappointment. But when Batman steps in at the last moment as Lawton nearly forgets his promise, Lawton notices that Batman has no qualms beating one of the Kobra goons within an inch of his life to get information on Zoe’s whereabouts. Deadshot calls Batman out on what he sees as a “Villain Move,” and we see that there’s really not all that much daylight in between the assassin and the vigilante.

At the Kobra safe house where Zoe Lawton is being held, a strange figure visits her cell. He’s a partially transformed Kobra follower named Keenum. He explains to Zoe why she’s being held there, and how Kobra plans to use her as the vessel to resurrect their original leader in her body as a means for revenge against Deadshot. Keenum had high hopes of being this vessel himself and so he plans to kill Zoe, leaving Kobra with no choice but to give him the “honor” of being reborn as the Kobra Leader. It’s a psychotic delusion and Keenum is clearly not well. When he hurts Zoe and she screams, he quickly hides back in the shadows, worried that the Kobra guards will catch him in the act. Zoe laments having to serve time for the sins of her father, but she also knows that he is probably the only one that will be able to save her.

Back at the Snake Pit, Batman and Deadshot have moved on and the snakes lick their wounds when a new round of hurt comes knocking on their door. Harley and Captain Boomerang get ready to break some skulls for information, but it’s Captain Cold who makes the first move, freezing a Kobra goon and getting the information they need. Captain Boomerang seems a little hurt, thinking for whatever reason that he would be the one in charge. When Cold claims to have a better “Captain” moniker because at least his name contains alliteration, Boomerang gets bent out of shape concerned that Cold is trying to screw him, proving ultimately how unfit for command he really is.

Meanwhile, the road-tripping Deadshot and Batman exchange pleasantries about their backstories. Deadshot recalls that Batman mentioned one of his own was raised by a cult and that he wasn’t able to save him from that experience. It seems like a good enough reason to try and save Zoe, but why bother freeing Deadshot at all? Batman reminds Lawton that he isn’t on Amanda Waller’s side and doesn’t approve of her methods or her team in the first place. Lawton continues to attack Batman’s entire ethos, claiming, “Humans aren’t hardwired for altruism,” that if you do something good, it probably benefits you. Even if it’s simply to relieve you of guilt, it benefits you. Batman’s only retort is that since Deadshot is looking for his daughter selflessly, that’s proof that he cares about others. It’s kind of a flimsy argument and it makes for an interesting read.

Suddenly out of the darkness rises a huge, snake-like figure and Batman crashes their truck into the hulking giant. Before they can properly react, the truck is riddled with bullets. Their fates unknown, the issue comes to a screeching halt.

Analysis: This could easily be a paint-by-numbers tale of Suicide Squad debauchery featuring DC’s biggest sales booster! But we’re actually treated to some introspection on the parts of Batman and Deadshot. Deadshot challenging Batman to admit that their similarities outweigh their differences, and Batman pushing Deadshot to admit there’s more to him than contract killer. Meanwhile, Zoe Lawton has to come to terms with the fact that the sins of the father being attributed on the children might not be such an unfair burden as she’s fully aware that she’s inherited many of her father’s traits.

Jose Luis’ pencil work is growing on me. While at first, I thought that the art duties might be one of the weak links on this book, by the second issue of this arc I have to concede that it is more and more impressive. The line and color work of Tarragona and Lucas serve to make it all the more palatable. I’m not sure that Jose Luis is a marquee name yet, but he might be on his way.

Final Thoughts: Whatever you think of this team for the Suicide Squad, the team that’s presenting the Suicide Squad is doing a really good job and I’m looking forward to seeing how this plays out between Batman, Floyd Lawton, the rest of the Squad and Amanda Waller. The pieces are set up for an interesting confrontation and so far these creators haven’t let us down, no reason to suspect they won’t be able to stick the landing.