Review: Adventures of the Super Sons #12 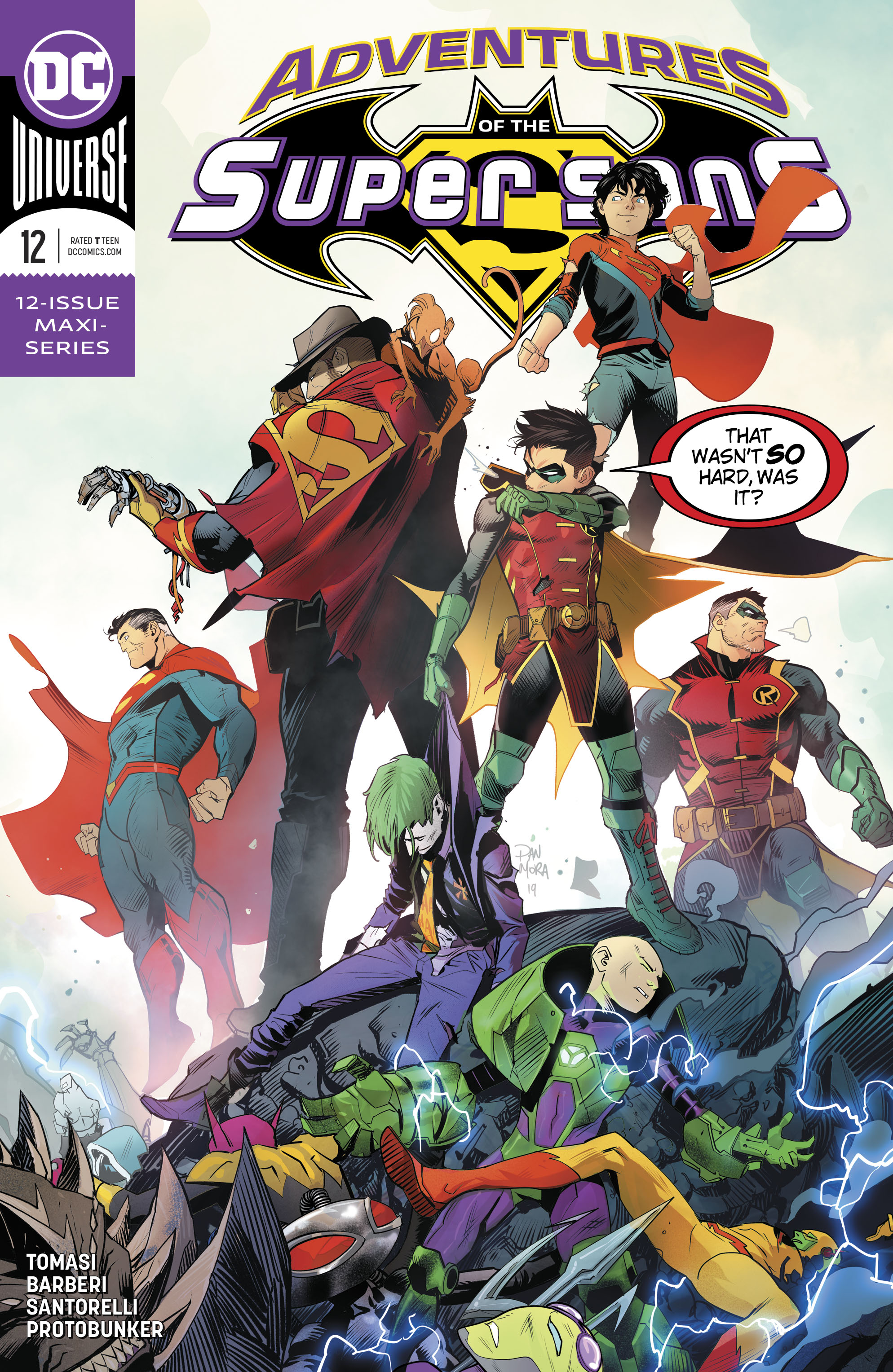 Overview: Robin spoils the entire comic on the cover of the issue. Oh, and I suppose it ends.

Synopsis (spoilers ahead): This comic is split between two events, followed by a quick wrap-up: setting the story up for future stories.

First, the story grinds to a halt as our heroes find themselves trapped in an interdimensional cube, only to have the cube’s own sentient mind show up and explain why everything has been happening the way it has. They ask the cube to bring the Puppeteer back to life in order to use his mind control disks to hack into the cube and break out. The cube does whatever is asked of them before they finally break out and then fight Rex, which is over in a heartbeat after Robin spends five seconds showing the cube his memories fighting alongside Superboy to motivate it to defeat Rex and save the day.

Finally, the heroes return home, only they spent all summer doing their mission and now have to go to school, and we get a glimpse of the old-people versions of the heroes regaling kids with this story.

Analysis: This issue was really bad. The only saving grace of it is Superboy is an amazing ray of sunshine and joy and I was forced to smile every time he said something. But the actual story leaves so much to be desired. The end conclusion of this story feels like a D&D campaign where the dungeon master is just tired and wants to end it already, so he just says yes to whatever the players ask for and makes the boss super easy to defeat just to be sure.

As soon as the players figure out what they are in, the cube’s sentient form just appears and apologizes for everything that’s happened, and then proceeds to give them anything they want. It was not scared of Rex. It was not in danger if it did anything to stop Rex. It acts like Rex is acting outside of its control, but it cleans up the mess in an instant just by being shown a couple of the gang’s previous adventures.

It’s not even like the events in the story have been leading up to this. The previous issue made it seem like being captured in the cube was a big obstacle that needed to be stopped. And for those arguing this “subverted my expectations”, a story needs to be good before it is unexpected. You can know exactly what’s going to happen and still enjoy the story. You don’t need a twist at the end to solve everything. Although, even if this was the point and it wanted to subvert everyone’s expectations, how is a deus ex machina like this supposed to be a satisfying twist? No one is challenged by this story. People just win. Sure Superboy is punched around a little and it hurt, but he knew everything was fine while it was happening. It barely lasted a page’s time.

And it’s not like this issue isn’t entirely without salvage. “Rex traps them in the cube and our heroes need to use the cube against Rex to defeat him.” This is easily an ending that can be recovered. First, remove the Cube as a character from the story. Have Rex taunt and toy with the heroes with images of the past events going on. Throwing constructs of monsters and enemies at them to bully and berate their accomplishments. Have the Puppeteer be brought back among a dozen other bodies of defeated enemies that Rex has stood over unchallenged. The heroes manage to get a hold of the Puppeteer’s body and his mind control disks and while having Superboy distract Rex by acting as his punching bag, Robin hacks into the disk and use it to override the Cube and defeat Rex.

Force your characters to fight for their victory. If they just get their victory handed to them, it makes the achievement pointless.

However, as I mentioned in the beginning, not everything is terrible. Superboy is adorable and his quips and lines are hilarious to read, So at least there’s that.

Final Thoughts: Well, the story is over at the very least. The heroes got the victory they wanted, and they didn’t even bother hiding this to us with the cover. Robin was correct. It really wasn’t so hard, was it?