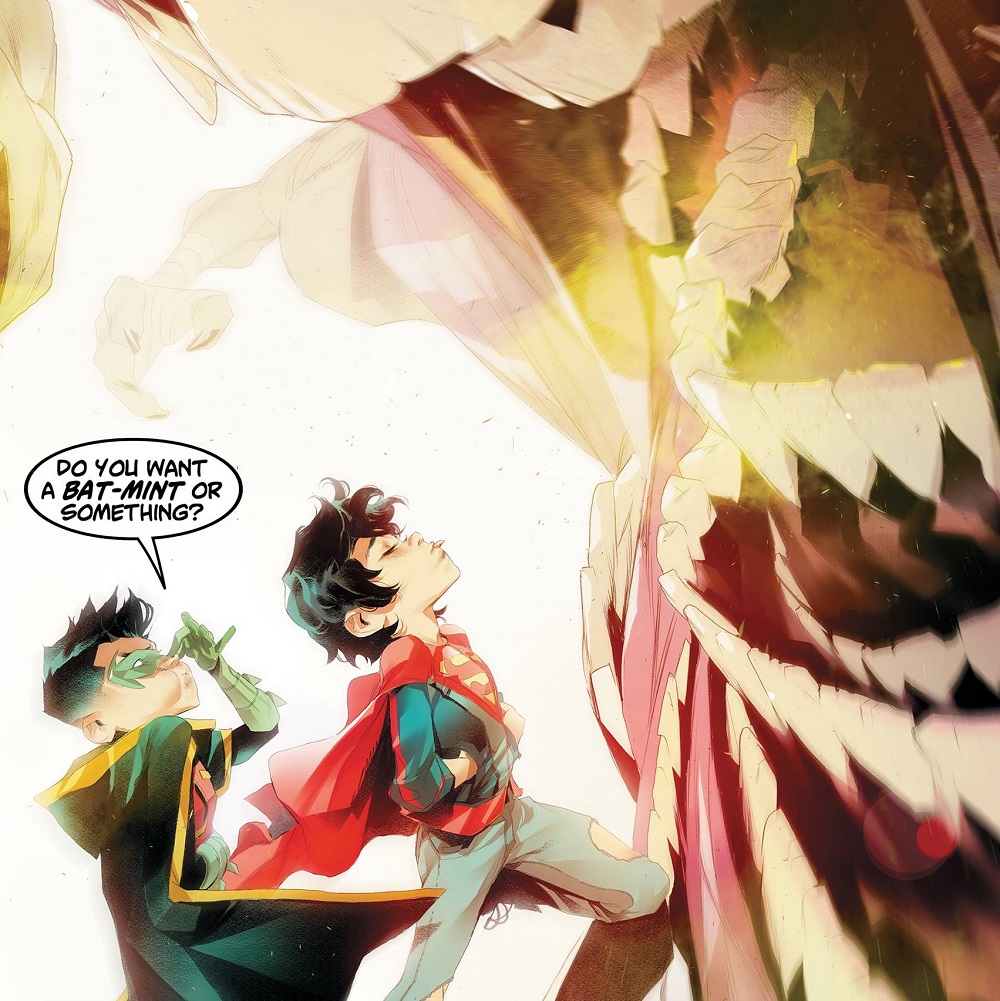 Overview: In Challenge of the Super Sons #3, Superboy and Robin continue to follow the Doom Scroll and save members of the Justice League only to later find themselves face-to-face with an immortal enemy.

Synopsis (spoilers ahead): Challenge of the Super Sons #3 begins in England, 1520 AD, Felix Faust and Vandal Savage stare in amazement at their two captives; Superboy and Robin. Using a magical device called the Mind Tablet, Faust manages to reveal some of the boy’s memories, memories which include the two villains battling against the young heroes and members of the Justice League.

Patience is the key for Faust to uncover a way for them to travel through to the future, a comment that enrages Savage. The immortal man has been patient for a very long time and doesn’t want to wait any longer.

Reproaching Savage to mind his temper, Faust entrusts the safekeeping of their prisoners to Rora, his squire, who is treated as his slave, and departs with Savage to confer with his library of knowledge to continue guiding his work in the dark arts.

Hours pass, and under the cover of nightfall, Robin and Superboy, now fully awake, easily break their bonds and silently escape. Traveling through the air thanks to Superboy’s power of flight, the boys quickly put distance between themselves and their captors, only to be stopped suddenly. They’ve hit an invisible, magical wall that prevents them from traveling further, and not a moment after they’re halted, they’re attacked by a monster that manages to swallow the boys whole. The monster’s dinner doesn’t sit well with it, however, and momentarily after being eating the young heroes are vomited back out, thankfully with all their limbs intact.

Gazing around, Robin wonders aloud what happened to the monster that just tried to eat them; it’s disappeared.

Making her presence known, Rora steps forward and states that she is what happened to the monster. Faust sent the creature after the boys when Rora told him they escaped; what Faust doesn’t know, however, is that Rora let them sneak past her and neither will Faust know that the boys are still alive.

Appraising her suspiciously, Robin demands to know why to which Rora responds that she wants to help them because she wants them to take her to…tomorrow.

Later in Challenge of the Super Sons #3, in the present day and current timeline, Robin recounts the events as he holds a mace in his hands, explaining how he and Superboy were transported into the past, which revealed to them that Vandal Savage and Felix Faust have been working together for centuries. After they magically forced their way into the young heroes’ minds, the villains realized that their future selves would be beaten again and again by Superman, Batman, and the rest of the Justice League.

In retaliation, the villains planted a series of long-term spells on members of the Justice League, designed to kill them. Thanks to Rora, Superboy and Robin were given an ancient scroll that will warn them which League member might be in danger of dying within the hour. Unfortunately, there is a fail-safe; if either Superboy or Robin reveals any of this to anyone, that will mean instant death.

Gazing down at an unconscious Hawkgirl in the Museum of Antiquities, Robin wraps up his explanation by stating that is why he had to hit her from behind with her mace.

A panicked, muffled sound from Superboy (who Robin refers to as his assistant) cuts off the son of Batman’s monologue; his friend is staring at him very irritatedly while keeping his lips carefully sealed. Poisonous gas was to be the last thing Hawkgirl ever inhaled, but that was thankfully avoided by the timely intervention of Superboy, who breathed it all in.

Ditching the recap and the museum, the boys hurriedly make their way through a street festival in the city of St. Roch, trying to come up with a plan to safely dispose of the toxic mist Superboy is keeping in his mouth. Robin’s suggestion of flying into the atmosphere and releasing the gas there is shot down by Superboy, who acts out that he’s worried about how that might affect birds.

Noticing a man dressed as a clown selling balloons, the two boys are hit with the same idea simultaneously; they book it over to the man and after grabbing a balloon, Superboy exhales into it, safely removing the poison from his mouth and keeping it now sealed in the balloon.

With no new messages on the Doom Scroll, the boys head back to Metropolis in the hopes of meeting up with Rora. Their hope does pan out, but not in the exact way they wanted. Rora does meet up with them, but standing right behind her and holding a knife to her throat is none other than Vandal Savage.

Analysis: Wizards, magic, and monsters are what Superboy and Robin find themselves surrounded by as Challenge of the Super Sons #3 opens up, the novelty of it all quickly becoming less exciting and more annoying as their tale continues. Peter J. Tomasi weaves his story through medieval times to the modern-day, revealing more about the predicament the sons of Superman and Batman have found themselves in, while artists Jorge Corona and Max Raynor both bring the story to life. Corona’s bold and stylized art illustrating the boy’s adventure in 1520 A.D. nicely contrasts Raynor’s more modern designs while the boys save Hawkgirl in the present.

Felix Faust and Vandal Savage, searching for the secret to immortality and a way to travel to the future respectively, are more than thrilled to have a solution practically fall into their laps by the arrival of Robin and Superboy. The banter between the two heroes, beratement on the part of Faust towards Savage to remember that patience is a virtue, and Robin and Superboy’s escape and a subsequent run-in with Faust’s monster was all quite fun to read. Through this, the plot is further revealed as Aurora, or Rora as she calls herself, teams up with the boys, which brings them and us back to the start of their adventure.

Robin’s recap, directed towards a very unconscious Hawkgirl, serves as not only a great summary of the story for us readers but also as a hilarious scene between him and Superboy, who’s referred throughout Robin’s synopsis as his assistant. The concern Superboy has for the birds and lack of that Robin demonstrates towards Superboy, who’s keeping poisonous gas in his mouth, was in character and fun to read, remaining consistent with Tomasi’s work on this series thus far.

Challenge of the Super Sons #3

Saving members of the Justice League from Faust’s spells is only half of the work Superboy and Robin have cut out for themselves; taking down Vandal Savage is the other. Although the boys are facing two villains that usually go toe-to-toe with the Justice League, the story continues to cement itself in its humor and focus more on the dynamic between Superboy and Robin than intensifying the plot; a story I’m really enjoying.