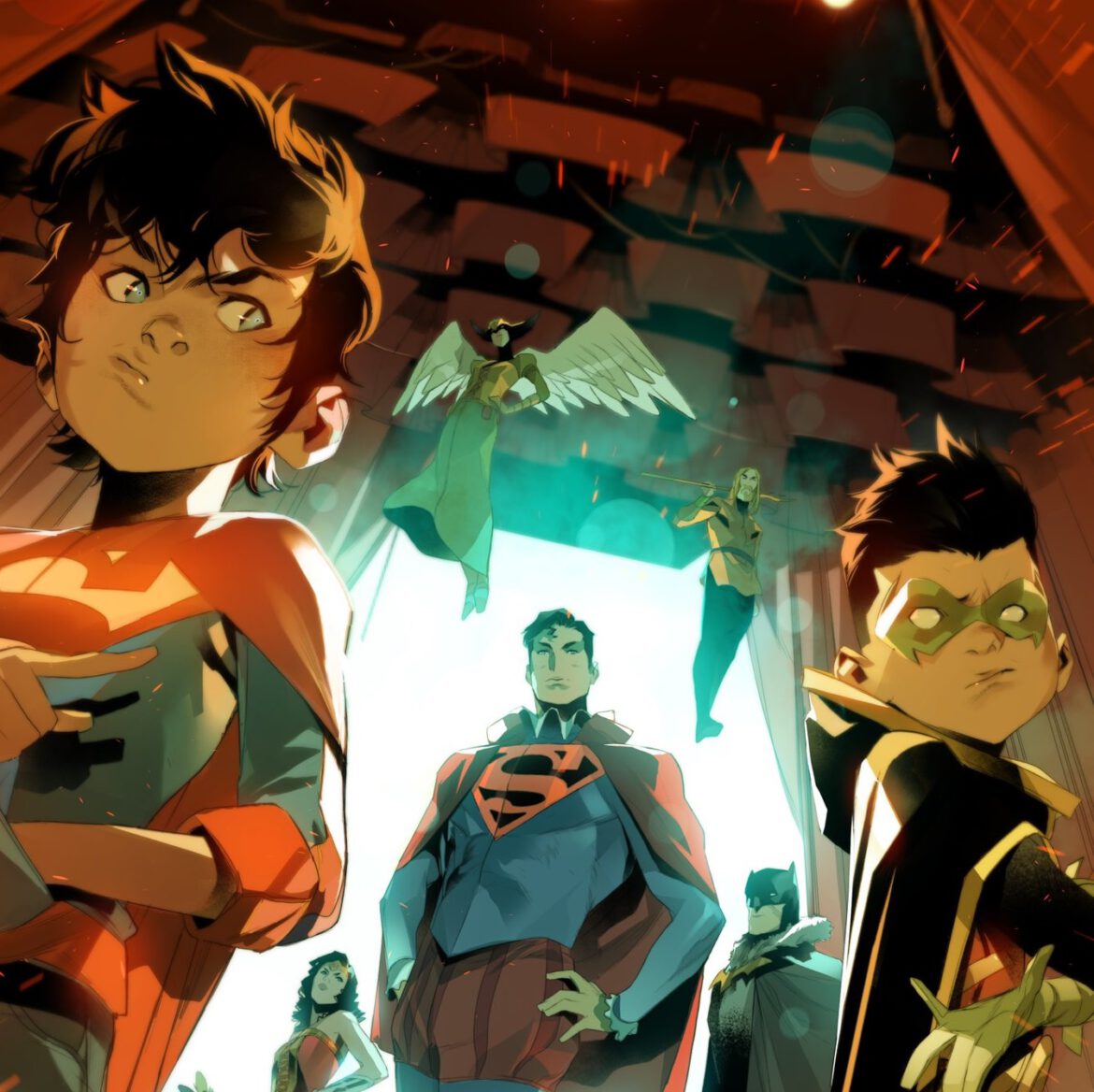 Overview: In Challenge of the Super Sons #6, Robin, Superboy, and the fate of the Justice League find themselves at the mercy of Felix Faust and Vandal Savage, with their freedom and way back home now resting in the hands of one unlikely heroin.

Synopsis (spoilers ahead): Challenge of the Super Sons #6 begins inside the magical forest, as Vandal Savage and Felix Faust stand before the great tree that is currently hiding their targets. Brought there by Rora, the young heroes believed the army of trolls might protect them from Faust’s powers, but sadly the trolls are no match for either villain. While their end goals differ–Savage desires to stop living stagnantly while Faust desires to see forever–the means to get there are one and the same. Superboy and Robin have presented to them in a way for their desires to be integrated, a way for them to carve a path to tomorrow where Savage will no longer feel idle.

Within the tree, Rora explains to the boys that Faust and Savage learned of the Justice League while they were held prisoners and that Faust is laying traps along time’s path to defeat them. Rora believes, however, that with the right conjuring spell she can return them to the near moment they left. She also explains that along with practicing her magics, Rora is also working on a way of using the trees within the magical forest to create a paper that will record spells and keep them empowered without the need for a sorcerer.

Just as Rora prepares to send them back home, the door blows inward, welcoming Vandal Savage and Felix Faust. Superboy and Robin are quick to engage in a fight, decently holding their own against Vandal Savage, but they’re brought to a halt by Felix Faust threatening to kill Rora if they continue to resist. His magic has her captive, and one move from either Robin or Superboy will end her life.

With no other choice, Robin and Superboy surrender themselves and are dragged away by Vandal Savage and Felix Faust, leaving a battered, but yet still determined, Rora behind. She won’t stop, despite the harm and threats, and doesn’t waste any time getting up and straight back to working on a spell to counter-act that of Faust’s.

Later, tied up by magical bonds that they can’t escape from, Robin and Superboy’s situation (and that of their future situation) is looking bleak. Vandal Savage is no stranger to torture and is only brought to a stop from beating the super sons by Rora, who sets forth a distraction.

Outside their window and standing before them is the Justice League, or a renaissance version of them conjured together by Rora. The ploy works and lures both Savage and Faust out of the room long enough for Rora to slip in and free the boys. Along with their freedom, Rora gives them the newly created Doom Scroll, the tool they need to obtain victory against Faust and a way to save the lives of the Justice League.

Rora urges them to leave through her portal and back home quickly, and thanks them for helping her learn that she doesn’t need to be scared in the face of evil, and that loss doesn’t define her. With that, Robin and Superboy return home, armed with the Doom Scroll and the weapon they need to rewrite their fate, and leave Rora to face her’s as Faust and Savage approach.

Analysis: The lives of the Justice League and the fate of their futures lie in the hands of Robin, Superboy, and Rora in Challenge of the Super Sons #6, written by Peter J. Tomasi and illustrated by Even Stanley and Luis Guerrero. The writing is as engaging as usual and art does a great job leaning into that with character reactions and cartoon-like expressions. (I personally loved the way the Justice League members spell-casted by Rora were drawn, with their renaissance-era costumes complete with feathered hats!)

Fraught with danger orchestrated by the conniving Felix Faust and Vandal Savage, the situation, which appears quite bleak for Robin, Superboy, and the heroes in their future is saved by Rora, whose quick thinking and creativity gives them both the opportunity and tool they need to combat the spells cast by Faust.

Each of their characters and personalities is wonderfully written in this issue, resulting in yet another humorous and lovable issue to the series. Robin and Superboy’s dynamic as best friends (who can’t stand each other most of the time) is always fun to read, and the inclusion of Rora within their little group doesn’t hinder that but adds to it. It does give the sense that these are pre-teens who are acting their age, if not with a little bit more combat and magical knowledge.

Faust and Vandale Savage do come across as a bit naive and less evil than what most DC readers might be familiar with reading other storylines, but the difference works in this story. It is much more concerned with telling the wild and adventurous tales of the Super Sons than it is with dark and gritty villains or mature plots and themes.

Challenge of the Super Sons #6

It's fun, a little goofy, a lot wild, and a series that stays true to the characters, making it a great addition to the tales of Robin and Superboy.