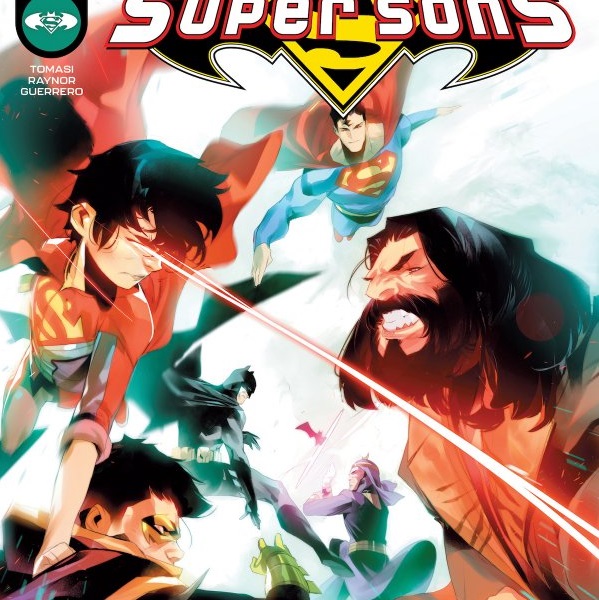 Overview: In Challenge of the Super Sons #7, the sons’ adventure has gained the attention of the Justice League, and Superboy and Robin will have some explaining to do…if they can first win against Felix Faust and Vandal Savage!

Synopsis (spoilers ahead): Challenge of the Super Sons #7 begins in modern-day Metropolis, the shining City of Tomorrow, as Vandal Savage and Felix Faust stand beside each other, neither extremely pleased by the failings of the other. Savage was bested by two young boys and Faust had arrogantly dismissed Rora, who was more of a thorn in both of their sides than either anticipated.

Their finger-pointing is interrupted by a bright beam of light, originating from the top of a building not too far off. On it, Superboy and Robin stare at the Doom Scroll, which has their own two logos inked on it.

According to the rules told to them by Rora, if the victims of Faust’s spells find out about their possible fate, the repercussions could be fatal, or worse. ‘Time-altering’ was another possibility, one neither is excited about.

The revelation that there could be something happening to them at that very moment without them realizing leaves Superboy more than a little freaked out and Robin quite done with his panicking. Robin isn’t impressed; despite Superboy’s fears, the Boy Wonder is very sure that they aren’t yet dead. Superboy strongly disagrees.

Their disagreement quickly turns into a rather heated argument, which is only halted by the arrival of Rora, older, and entering in via a magical portal. The spell of the Doom Scroll has been broken! The past is returning, and with it, Savage and Faust, who are gunning straight for the young heroes.

They clash against Rora’s magic, which is able to withstand their attacks, but not for long. Thinking quickly, Robin distracts the two villains while Superboy gets his hands on the Doom Scroll and, finally, destroys it using his heat vision.

Faust and Savage cry out in protest but are both sucked back into the time vortex, disappearing. Or so it seems. As Superboy and Robin rush to help a weary Rora, behind them loom the two villains.

In Superboy’s opinion, they’ve won and succeeded in completing their mission. Robin disagrees. Their disagreement quickly turns into yet another argument, but Rora interrupts them for a second time that day; Faust and Savage are standing right behind them, a fact quickly made known to the boys as the two time-displaced characters attack them.

The boys quickly go on the defensive and are able to hold their own decently, until Superboy suddenly collapses, weakened by Faust’s magic. Rora tries to intervene but is caught by Savage, who swears he will break every bone in her body if the boys don’t surrender.

The answer is obvious, and without a fight they allow Faust to encircle them in flames of fire and magic, which will slowly kill them.

Suddenly, they aren’t the only ones on the roof of the building anymore; the shenanigans of the Super Sons have brought about the attention of the Justice League, who has arrived just in time to thoroughly wipe the floor with Faust and Savage.

Six minutes later, both villains are securely detained, and the long adventure is coming to a close. Rora is able to receive help from the Justice League and thanks both the boys before she departs. Batman and Superman want some answers, and finally, father and son head back home.

In the epilogue, two old men tuck the now sleeping children in and put away the book, “Challenge of the Super Sons.” That adventure came to a close a long time again, and now, this one is too. The two men exchange a fist bump, and the tale is concluded.

Analysis: From start to finish, the Challenge of the Super Sons has been a delightful read with great characterization, humor, and action that ties itself up into one wholesome story. Peter J. Tomasi consistently does a great job with Superboy and Robin, writing their interactions together and crafting a story that is enjoyable to read, regardless of age. The artistic team, Max Raynor and Luis Guerrero, once again bring us art that adds to the story by its modern and dynamic illustrations and colors.

The stark similarities and differences between Superboy and Robin are what really make this series and the finale in Challenge of the Super Sons #7. Half of the time they’re arguing, and the other half they’re fighting for their lives while arguing. Faust and Savage were definitely not as villainous as they’ve been portrayed in other storylines and do come across as more “cartoon” like throughout the series, but even that isn’t an aspect that’s bothersome because it fits within the world that has been created and the story that is being told.

There were several little nods as previous comic book events, and I personally loved the line Superboy delivered after the Justice League intervened and saved the day. “Sorry everybody, he’s been in a bad mood for the past five hundred years or so.”

Editor’s Note: This issue collects two digital-first chapters of the series. You can find the chapters of the comic digitally and help support TBU in the process by purchasing this issue on Comixology through Amazon.

Challenge of the Super Sons #7

The story wasn’t crazy complicated or deep; it was executed with a simple and rather predictable plot, but one that was fun and engaging, making each issue a worthwhile read. The characters, script, and art were all well done, and ultimately I had a really fun time reading this series. Here’s to hoping DC might someday bring it back and continue the tale!