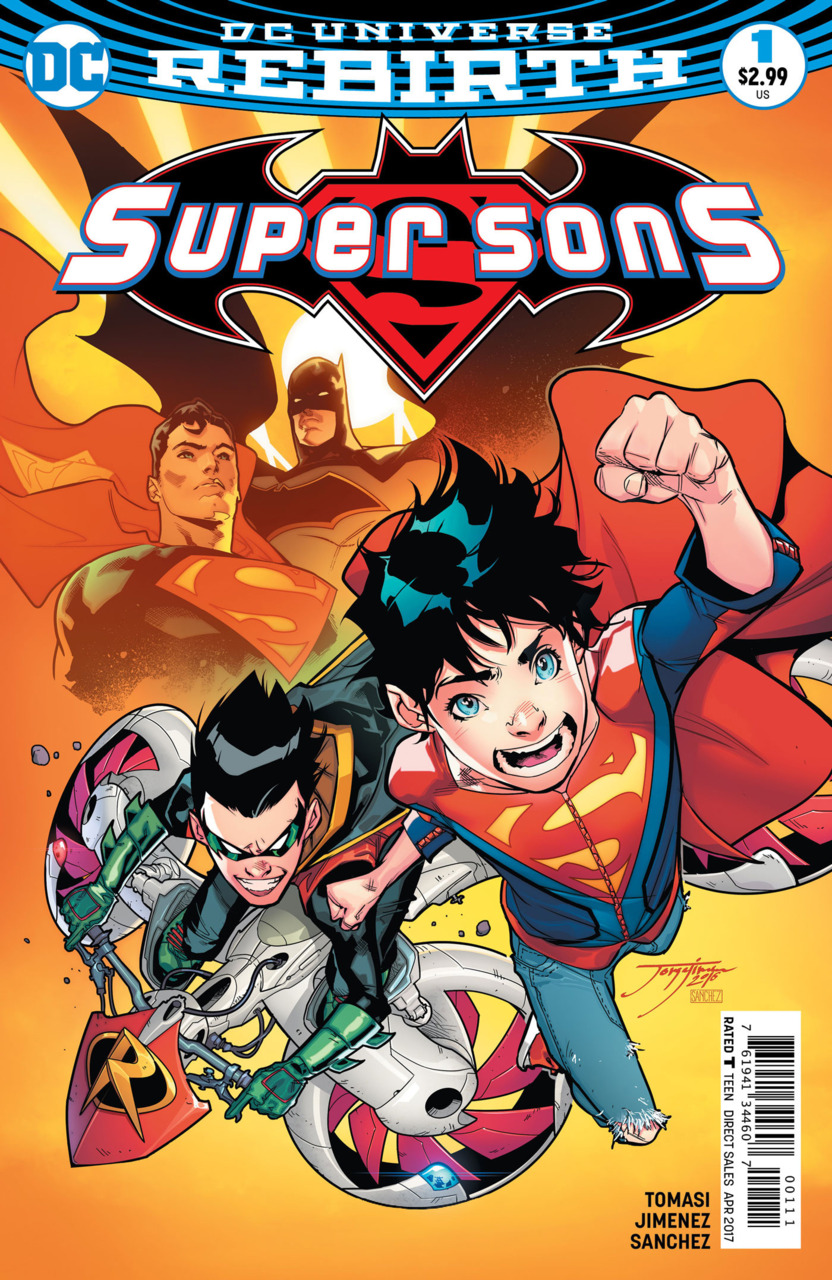 “So what’s your name?”
“It’s Jonathan Kent, you know that.”
“No, it’s Superboy, which means it’s time to forget going to bed on time… and be super.”

This little excerpt sums up Damian and Jon’s friendship in more ways than one. What could we expect from Peter Tomasi but on point characterization and his love for those characters exuding from every page? This issue, which got released as #1 instead of a Rebirth one-shot, had me smiling from Dustin Nguyen’s variant cover up until the last page – his watercolors never fail to please me. I always find it tricky to use big names for the variants when the inside art doesn’t deliver, but Jorge Jimenez just picks you up from the collar of your shirt and takes you flying through this story.

The first scene in this issue shows a spoiled boy, Reggie, screaming at his family to get whatever he wants, whenever he wants. His screaming face in the second page is so expressive that I knew from there on that Jimenez was delivering an amazing piece of art in this comic. Reggie seems to have mind controlling powers, but then we are shown that he and his family are actually shooting a scene and that it might be all just acting. Or is it?

Reggie doesn’t show up again in this issue, but it does feel as if he will soon return. After Reggie’s scene we have the first appearance of our boys, Robin and Superboy. In the middle of some tropical forest, they are being attacked from all sides by robot versions of themselves. This holds one of the most endearing pieces of dialogue of the comic: they arguing about whose name should come first on basis of “I’m older”; “I’m taller”. It is always amazing when Damian is portrayed as a kid. He always takes himself so seriously, and I feel that Tomasi excels in portraying him as a boy who has had to grow up too much too fast, but who is still a kid at heart.

Besides that, Damian is piggybacking Jon while they try to dodge the attacks, and you should keep this information stored for the end of the comic. Trust me, it is worth it.

After this scene, we are shown what has led up to the situation at hand. Two days before, Jon is taking the school bus as the regular kid he is. On the way, he stops some bullies from attacking his friend, Alan. Kathy is also shown, and I’m glad we are going to have her in this universe, her being Jon’s best friend in the current Superman title. After class, there is a snowball war, and the same bullies from before jump into it and start putting rocks inside their snowballs, cornering Jon and his friends. Suddenly, there comes a monstrous snowball from the sky, falling on top of the bullies. Jon, realizing who must have thrown it, goes to the school’s roof, where he meets Damian. He had been posing as different adults, including a teacher, through the day to “see how the other half lives”. Damian, being Damian, brags about knowing how to drive since he was five, and of knowing enough about geology that he could have gotten a doctorate in it since he was seven. Pure gold.

This is followed by the best couple of scenes in this issue, with Tomasi contrasting Damian’s and Jon’s family dynamics. In the Batcave, Damian is benched by Bruce for having missed his study session of the day and for being behind on his homework. This is a nocturnal family, all about duty, honor, stoicism and secretiveness. Meanwhile, in Hamilton County, the Kent family is playing poker and talking about Jon’s day at school, how he stopped Alan from being bullied and how proud they are of his attitude. Lois wins that hand, which shows that either she is an amazing liar or that Clark and Jon won’t use their power to cheat on poker. I prefer the latter, since this family is all about love, caring, honesty and openness.

Jon gets sent to bed after Superman receives a call from the League, and Damian creeps up on him, mocking him for having such an early bedtime. And Jon has a Superman poster on his wall, which is completely endearing. Moonlight shines through the window and we have an amazing panel with Jon puffing his chest and Damian snickering at him and they are so much their father’s sons at this moment. Damian convinces Jon to go out with him to investigate some break-ins in Lex Corp, and once again we have an amazing panel. They are leaping across Metropolis’ sky, lighting striking behind them, and it could have been The Dark Knight Returns were it not for how skinny the figures are.

Remember the piggyback ride in the first pages? Yes, this is where it comes around. Jon tells Damian to piggyback him across the buildings, to which Damian answers “Rest assured, you will never find me piggybacking on your narrow shoulders”. Looks like fate has got you there, little Robin.

Of course, as they are climbing their way up on the Lex Corp building façade, Lex finds them, and the look on Jon’s face is absolutely priceless. Of course, Damian only answers with his preferred noise, “>tt<“.

I have to say that this book had me from the moment Tomasi was announced as the writer. Anyone who has read his Batman and Robin issues knows how great he is with family dynamics and with both Bruce and Damian, and anyone who is following his and Gleason’s Superman run knows how much his portrayal of the Kents is as much impeccable as the Waynes. Having him writing those two was almost more than my heart could take, and, as ever, he doesn’t disappoint.

As for Jimenez’s art and Alejandro Sanchez’s colors I can only describe it as beautiful, expressive and fun. The arms and legs of the bullies sticking out of the monstrous snowball had me chuckling as a kid. I can’t deny that I was expecting Patrick Gleason to be the artist, considering his history with Damian in Robin: Son of Batman, but Jimenez and Sanchez had me with their Superman Annual, and from that moment on I was even more hooked for this book. If the following issues are of the same quality as this one, this is sure to be the all-ages comic book that so much people had been waiting for, and I can’t wait to try and bring the kids in my family over to the geeky side of the force with the help of Robin and Superboy.