Review: Adventures of the Super Sons #8 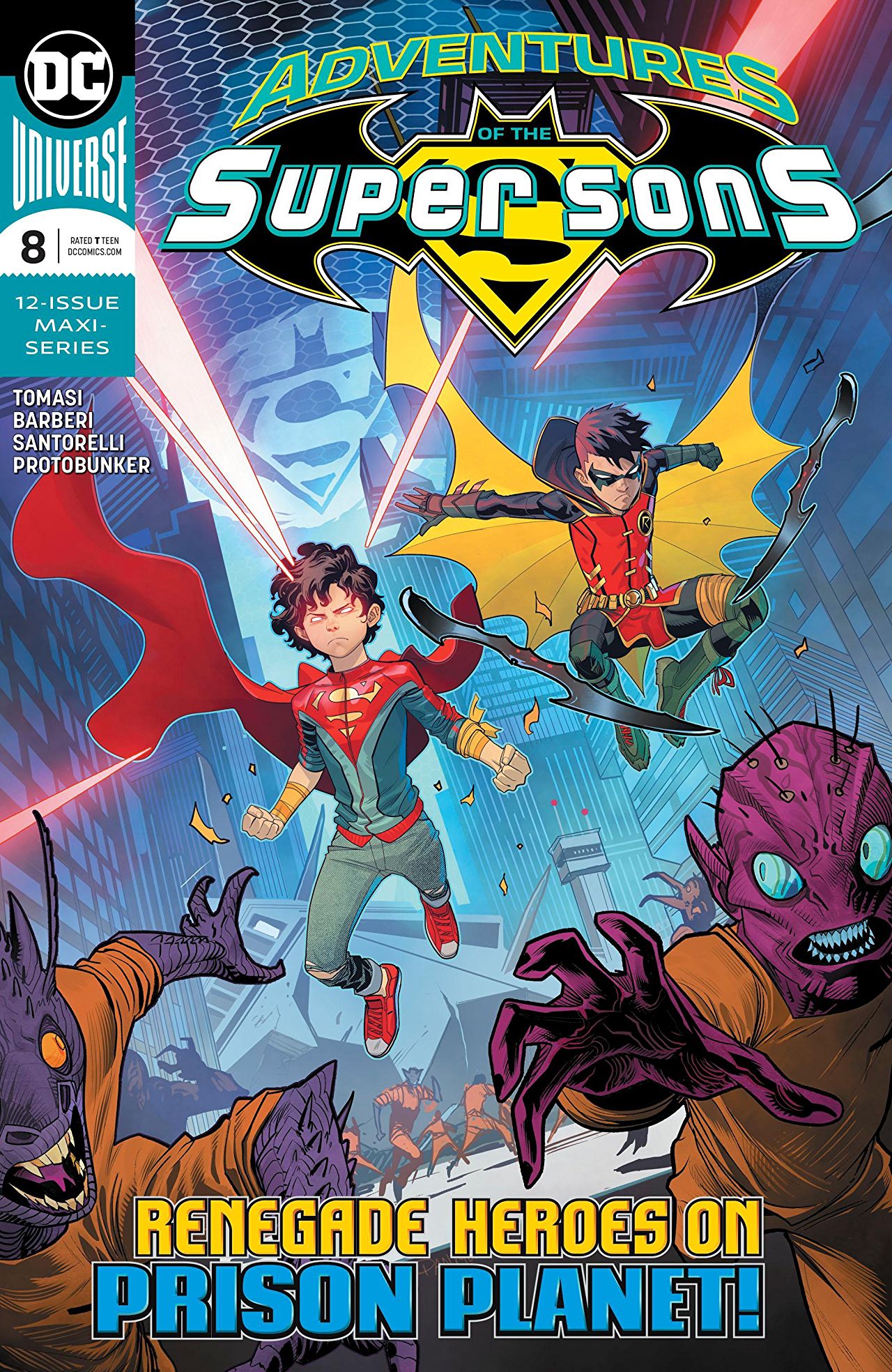 Overview: Reunited again, the Super Sons have to put aside their mistrust in Joker Jr. and formulate a plan to escape Takron-Galtos while Rex Luthor takes over the planet with his very own Injustice army.

Synopsis (spoilers ahead): The issue picks up right after Robin and Joker Jr. rescue Superboy from solitary confinement. Enraged by yet another escape from the Super Sons, Rex Luthor raises the stakes by appealing to the entire planet of alien juvenile delinquents and offers any and all enhancements if any of the inmates should choose to assist him. Not long after, Rex has his very own Injustice Army.

The boys take refuge in one of six Batcaves Damian had established in the very short time they had been imprisoned there. While there, Damian regroups and enlists the help of the young Green Lantern Al-X. They decide to use captured villains to disguise themselves and gain entry to the “vroom tube” in order to reach a safe sector off the prison planet.

Arriving at the vroom tube, the group tries to trick their way past Rex but he sees through the disguises. Joker Jr. steps forward and tries to play the role of “triple agent” and he meant to bring the boys to him all along. The ruse plays long enough for Jon, Damian, and Al-X to escape but not before Rex seemingly kills Joker Jr. Now apparently disinterested in the Super Sons, Rex states they are someone else’s problem now. The boys zoom off with their new teammate to their next adventure.

Analysis: Another exciting issue ends with its usual combination of action and humor. With a few twists and Rex’s endgame starting to form, the issue seems to be taking steps towards the arc’s conclusion. The full creative team continues to deliver between great dialogue and solid cartoony action.

In regards to writing, Tomasi yet again gives us an issue that seemingly overlaps different demographics. On the one hand, he is writing issues that could appeal to any kid who picks this up as it has the right amount of action and superhero adventure they can associate with while also writing self-aware dialogue from the characters within the story. We have multiple moments where Jon continues to be surprised at how much Robin acts exactly like Batman. Damian is a brightly colored sidekick that seems so misplaced in this story given his dark nature. That is, by no means, a criticism but merely a source of comedy in such a kid-friendly story. Tomasi writes even his side characters to be parodies of their Earthling counterparts with the new Dr. Light being a school drop out and a muscled, meat head who is a former doctorate. It’s this attention to detail and self-awareness that makes Tomasi so adept at straddling the line and making issues a great read for readers of any age.

The artwork, in general, was great in this issue. I would not say the art team did anything out of the ordinary from previous issues but they continue to bring this crazy space adventure to life with each panel. It’s gotten to a point that between the pencils by Barberi and the colors/inks by Santorelli/Protobunker I feel as if I can see this series as a cartoon series, not unlike the Justice League cartoons. It just has that energy and flair that keeps you engaged.

Final Thoughts: Overall, I enjoyed this issue and the story itself shows the stakes are only getting bigger from here forward. I am looking forward to seeing the Super Sons face off against this newly formed Injustice Army.