Review: Adventures of the Super Sons #9 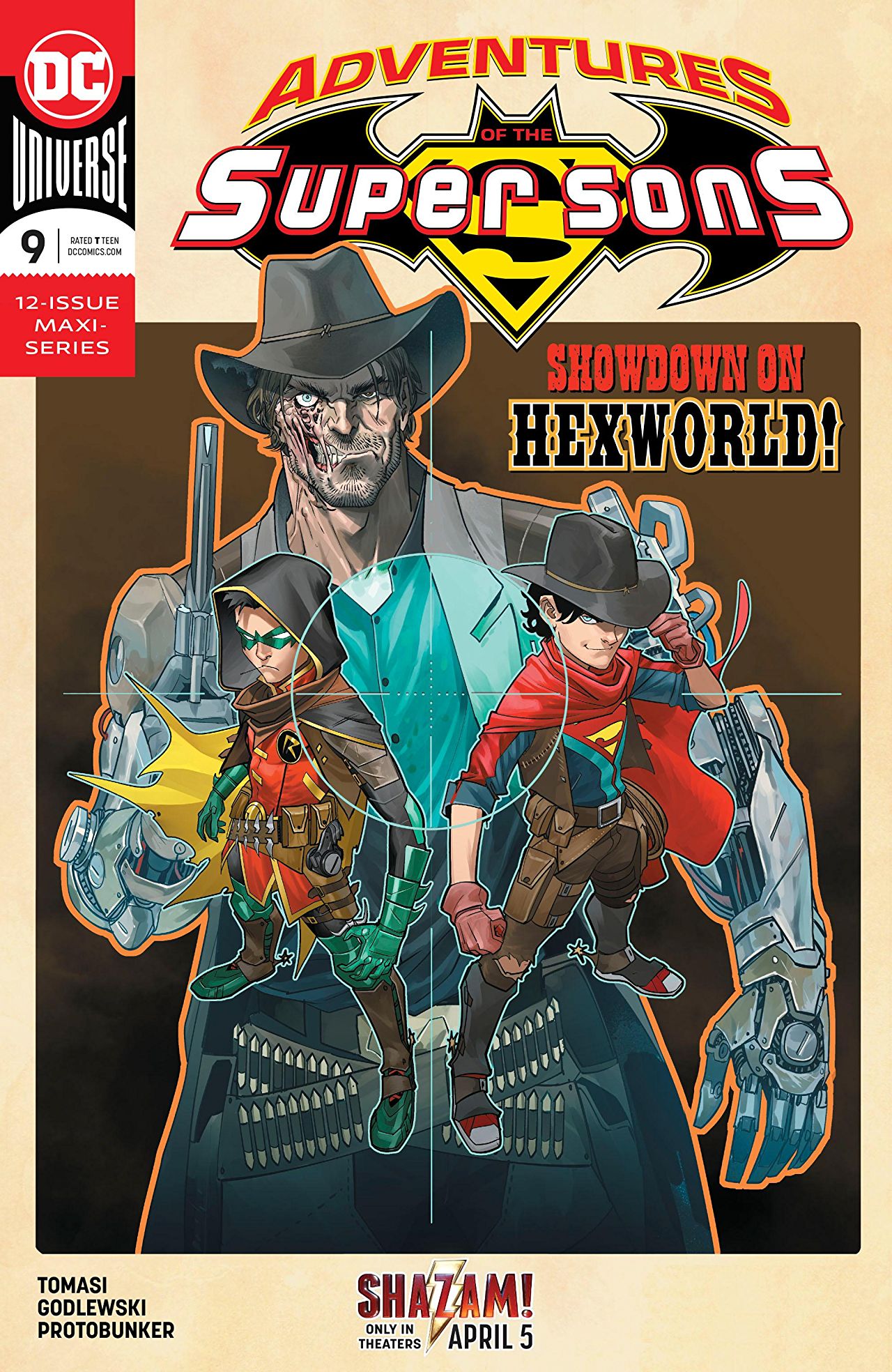 Overview: After escaping the clutches of Rex Luthor and his Injustice League, the boys find themselves on a planet comprised of both futuristic robots and cyborg cowboys. It is here they come face to face with an android Jonah Hex.

Synopsis (spoilers ahead): On Leone -5, a trio of gunslingers are holding Jonah Hex at gunpoint. Hex is already angry that they shot off his robotic hand but then they inform him that General Tomorrow has ordered that Jonah return to the planeteers. This appears to be at odds with some arrangement that Hex made with the military commander. Before the conversation continues, the Super Sons and Green Lantern AI-X crash via Vroom Tube onto the would-be kidnappers.

After becoming acquainted with one another and their brief backstories, Jonah Hex agrees to help the boys get off the planet and back to Earth to try and stop Rex Luthor. Having saved him, he owes them a debt in his mind and agrees to take them to the nearest exit (a few days ride). The exit turns out to be an intergalactic train station that should be able to take them anywhere.

Around the campfire, Jonah explains his history as a robot on the trains initially but being reprogrammed for war by General Tomorrow. After fighting for him a long time, he was given leave and has been on this planet since.

Back on “Hexworld”, the group arrives at the central station and begin their attack. Despite his many attempts, Green Lantern is unable to get Jonah to see the benefits of independence and allowing AI-X to reprogram him. Jonah goes so far as to suggest enlistment in the Green Lantern Corps is just another version of servitude that he is programmed for. The choice for Jonah Is taken away, however, when AI-X knocks out Hex and reprograms him anyway. It appears the process is a success and the group resume their attack and are able to board a train. With the train thrusting at full power, the group leaves the planet off to their next adventures.

Analysis: Just when you thought it could not get any crazier than child super villain doppelgängers and an entire alien planet for juvenile delinquents, Tomasi comes in and introduces yet another off the wall story. Between the artwork and the writing, we get another strange addition to this universe-wide adventure.

The issue itself looks great with clean pencil and coloring work. There is not a lot of darkness in the comic and, with this kind of subject matter, there really should not be. The vibrant colors and outlandish looks for both the “Hexworld” characters as well as the Super Sons in cowboy getup is all very fun to see on the pages.

Likewise, the writing continues the spirit of this continually bright and cartoony story. Tomasi definitely understands how to keep the overall tone and humor between the Super Sons and their ever increasing circle of strange friends interesting. There are little nuggets of depth if you look between the lines such as the struggle for independence that Jonah Hex deserves and the dilemma that Green Lantern AI-X faces on whether he wants to stay in the Corps.

Final Thoughts: The overall plot of Rex Luthor continues to develop, in the background, but with fun issues like this one, I find myself forgiving the pushing off of the central plot for later. Tomasi’s latest addition was welcomed and the art team helped to keep the fun tone this series has been striking lately.