Review: Adventures of the Super Sons #10 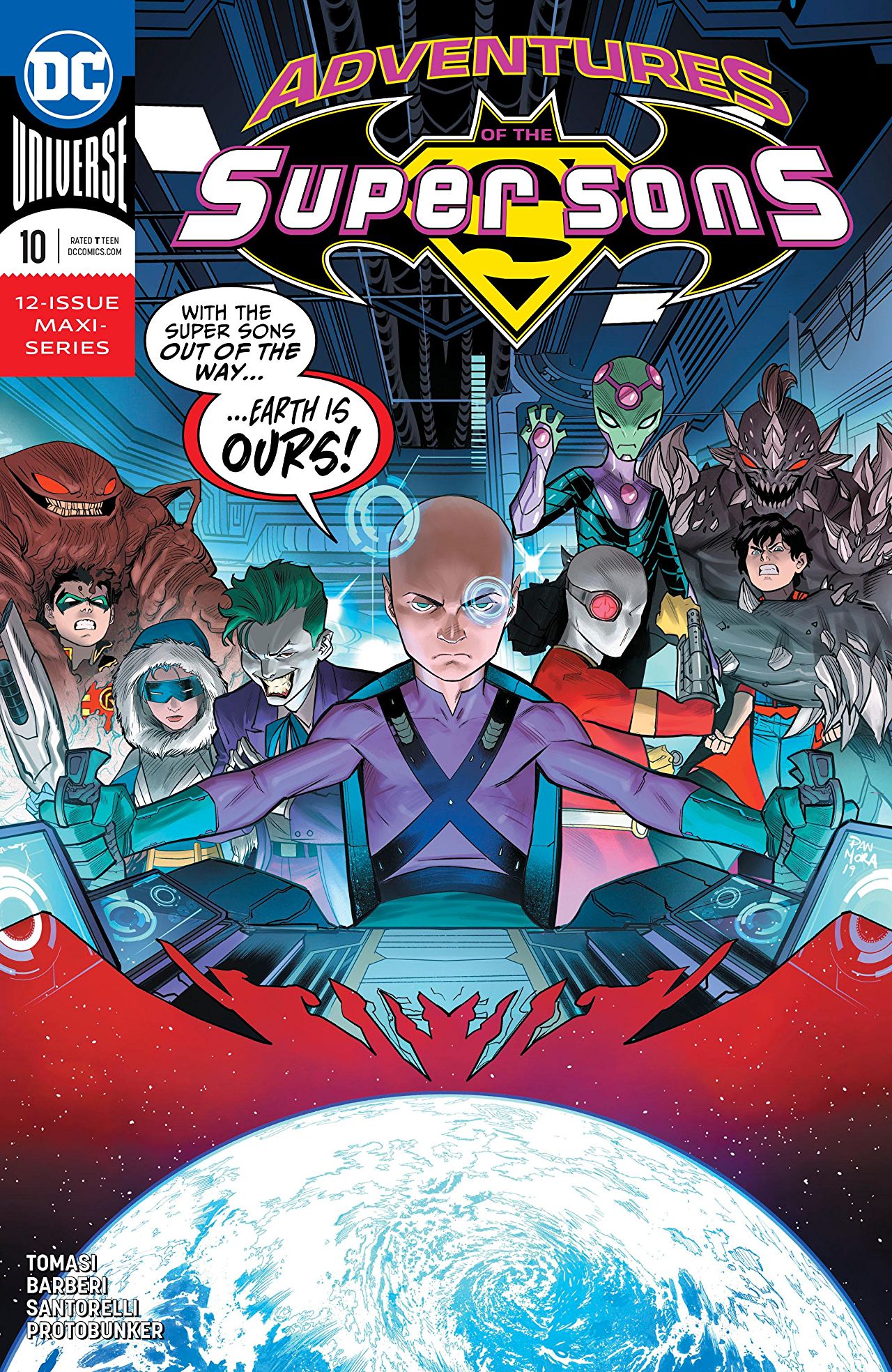 Overview: The Super Sons, with their new allies, finally take the fight to Rex Luthor and his gang. Despite overwhelming odds, the tide looks like it is beginning to turn.

Synopsis (spoilers ahead): The issue begins with the dramatic retelling of this story by an old grandfather to his grandchildren. He is interrupted by the children’s father who claims to have been there. The man and grandchild look very similar to Damian.

Picking up on Cygnus, Rex is explaining the power of the hypercube and all that is it capable of. Cut off abruptly, the villains see the Super Sons, fresh off their adventures on Hexworld, flying towards them. They radio AI-X to bring the train in for a landing while they start the fight. As the boys start the fight, Jonah Hex and AI-X ready the ship for landing. Jonah gets the future Green Lantern out if earshot while he radios an unknown character and transmits coordinates and memory files. He unexpectedly shoots AI-X while Bizarrokid lifts the ship.

Meanwhile, Damian makes a push to retrieve the cube but is sidetracked by fighting a female Doomsday. Knocking him off course, Robin begins to float off into space. Jon sees this and breaks away from his fight with Luthor to save his friend. Back at the ship, Jonah begins plummeting to the planet’s surface but is saved by AI-X who was turned into a Green Lantern as a fail-safe due to Jonah shooting him (all part of the cyborgs plan to help the team).

Although they crash their spacecraft into Luthor’s, the group finds themselves completely surrounded. Jonah begins to threaten them but Luthor shoots him in the head, seemingly destroying him. No sooner does this happen then reinforcements arrive in the form of General Tommy Tomorrow and the future versions of the Super Sons.

Analysis: The issue had the usual fun moments between funny dialogue and action. However, short of Jonah Hex getting shot, the whole issue felt like it only captured the Super Sons approach to the planet’s surface to confront Rex Luthor rather than any real story progression. The artwork was solid once again but nothing stood out to me.

We did get a few twists in the story which help to elevate it. Between Jonah Hex and AI-X, they have been routinely attacking each other the last few issues only to be revealed as helping one another. The demise of Jonah Hex probably will not be permanent but the image of Rex Luthor holding an actual revolver does help to make him more sinister and willing to kill. We still have not seen the cube in action so I do wonder if Luthor will be able to showcase some of its potential now that reinforcements have arrived.

Regarding the artwork, Barberi delivers the defined pencil work we have seen in the previous issues. Santorelli and Protobunker add to the art which seems to portray these cartoony and action-packed issues.

With the arrival of Tommy Tomorrow, it does look like the story is reaching its climax. Still not knowing much about him or the older Super Sons, they appear to be arriving in full force ready to assist the boys. Still, against overwhelming odds and a virtual army of kid villains, Tomasi has set the stage for a fun battle that will commence next issue.

Final Thoughts: Overall, it still was a fun issue to read but it really didn’t lead to much, even with twenty pages. My biggest problem was the fact the issue was that many pages when the actual events could have been shown on less than half that count.