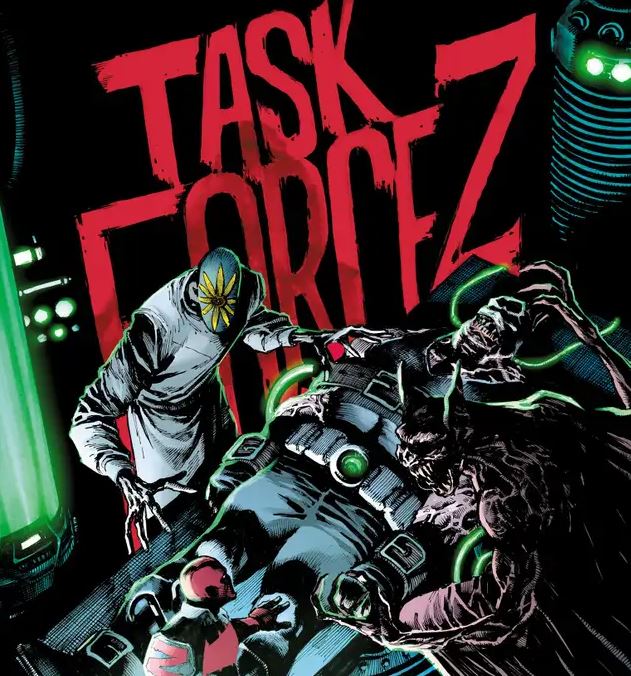 Overview: In Task Force Z #10, heroes can come back from the dead, and so do the villains. Mr. Bloom is still a step ahead of Task Force Z, and his endgame is near.

Synopsis (spoilers ahead): Task Force Z #10 begins months ago at the Chop Shop, as Harvey Dent and O’Conner appraise their newest subject alongside Drs. Delia and Amelia; a grotesque corpse that looks similar in appearance to Bane lies on a table before them. Clearly, someone wanted them to think Bane was dead, and for them to recruit Jason Todd to their team, they’ll need Bane alive.

If someone can fake Bane dying then they can fake him being alive. Well, mostly.

Currently, at Powers International, Dr. Kirk Langstrom continues cutting open Bane’s brain, dismayed at the state of decay within the neural pathways. When all the cognitive tampering and digital recollection manipulation are complete, it’s a wonder there is any functional tissue at all. Dr. Bloom does not appreciate Langstrom’s comments but is interrupted in his tirade by their boss.

Geri Power, who just then graces the scientists with her presence, expects good news. She’s going to receive mediocre news, although that might even be a stretch. They’re missing one key piece to bringing Bane fully back to remembering his old self. Langstrom is more than a little concerned, Bloom much less so.

At the new HQ for Task Force Z, Jason Todd awakes from a nightmare and leaves his room, searching for Dent or anyone still up. He’s met with Mr. Bloom, and the two waste no time diving into a fight. The commotion brings out Jason’s team, half of whom leave to secure the lab, the others join Jason, whose fight with Bloom sends them both flying out the window, crashing to the street below.

Unfortunately, Bloom knows what to say to trigger Madame Crow and KGBeast, turning them into his puppets much like Bane before them.

In a flashback that takes us once again to the Chop Shop, months ago, Amanda Waller declares the scientist twins and everyone else as phenomenally stupid; what they’re attempting to do is a surefire way to land themselves in Arkham Asylum by Batman himself, but a deal is a deal.

They’ve managed to get the corpses in working order, and Waller presents them with the Thinker, a.k.a, Mr. Devoe, the missing mad-scientist piece to their mad-science puzzle. Said mad-scientist-in-question isn’t really sure what anyone expects him to accomplish; he has scanned and digitally stored the psyches of dozens of notable figures in the metahuman community without their consent, but he has no way to retrieve or extrapolate the data.

24 hours later, Waller stands impressed as the Shelley twins conduct their experiment, working to insert memories into a dead man. She’s shocked when the dead man in question grows somewhat in size and demands a word with Bloom outside.

Waller can clearly see that Bloom is the brains behind all of this and that the rotting man on the table comes from Powers International, the corporation everything ties back to. Despite Bloom playing dumb, Amanda Waller departs with the cold, hard promise that his secrets won’t stay hidden from her for long.

In the present, Bloom has successfully overwritten the minds of most of Task Force Z with his own, a sight quite pleasing to his over-inflated ego. Jason and Solomon Grundy, the only other present members of Task Force Z to be unaffected by Bloom, trade blows with their opponents. However, they’re outnumbered.

Thankfully, Dr. Amelia is no slacker, and after being shocked with a taser KGBeast is brought back to his senses; the memory replacement therapy they developed doesn’t handle electroshock neural disruptions well, unsurprisingly.

Their fight ends suddenly as Task Force Z’s van speeds past them, picking Bloom up on the way. The driver, Dent announces as he joined them outside staring at the fading headlights, is Delia.

Hours later at Powers international HQ, Langstrom and Bloom praise Delia for her incredible work and watch as the person laying before them awakens.

His name is Hank Clover Jr. Bloom knows him as his other name and welcomes Gotham back. His city needs him once more.

Analysis: What do you know, turns out it wasn’t Bane all along. The masterminds behind Task Force Z clearly knew how to go about manipulating Jason Todd into the leader of their little operation, and in a turn of events, required them to fake Bane being alive rather than faking a death.

The story in Task Force Z #10 continues to showcase great art, with lots of fantastic coloring and energy by the creative team of Eddy Barrows, Eber Ferreira, and Adriano Lucas, which blend well with all the action-packed into the issue by Matthew Rosenberg. Mr. Bloom is aiming for something, something relating to Powers International and Gotham, but what that ultimately entails we still don’t know.  His rambling monologues don’t give much away, other than a deep sense of nihilism, lack of interest in the good of others, and a perverse interest in science.

The story jumps back and forth between the present and the past, which gives some answers and more questions. The flashbacks throughout the issue do reveal that Amanda Waller knows more than previously assumed, the Shelley twins are the true geniuses behind the Lazarus Resin process, and that they’ve been gunning for Jason to be a part of the whole operation from the start.

There are a lot of reveals and moving pieces, not just in the issue but built up from previous ones, and although we still end on the return of Gotham, the pacing of the issue and overall focus on the plot do feel a bit chaotic. As we’ve seen in previous issues, Jason’s entire point to Batman was that he needed to complete the mission and continue his undercover work to prevent whatever it is that Bloom and the others are up to and take them down. How and when that will take place is yet to be seen.

Additionally, the series started out with the underlying themes of whether or not it was moral to bring the members of Task Force Z back from the dead and if bad people can still do good things. The philosophical questions were intriguing, especially against the backdrop of Jason’s history as a hero, anti-hero, and vigilante. It seems to be placed to the side in lieu of all the action, but hopefully, these questions will be brought back up, as they deepen the story and characters.

There’s a lot happening and still quite a bit to take place. Hopefully, the conclusions that will be provided in the upcoming issues will tie everything together and leave us readers satisfied.