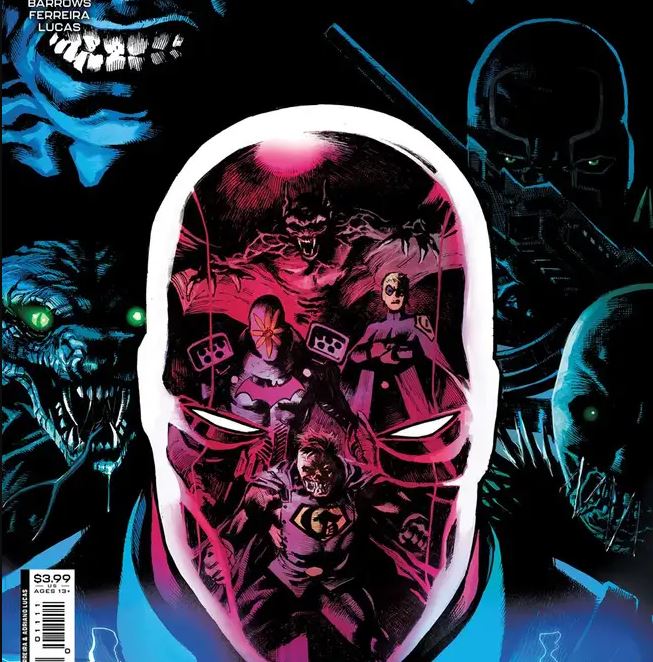 Overview: In Task Force Z #11, the group finds itself in a world of trouble as Mr. Bloom makes his final play, and it’s one where not everyone is coming out alive.

Synopsis (spoilers ahead): Task Force Z #11 begins a few months ago at the Old Task Force Z headquarters; Jason Todd sits in a room, glaring at Harvey Dent. Jason isn’t interested in being his prisoner, although the government agents awaiting him outside are a more significant threat to remain in than escape out.

Harvey Dent can give Jason Todd a chance not just to clear his name, but to actually help people. Someone needs to run the team, and Dent is clear that he’d sleep all the better knowing the monsters were in Jason’s hands.

At the new Task Force Z headquarters yesterday, a livid Jason Todd lifts Harvey Dent up by the lapels. Dent lied to him, Jason realized, as Bane was never truly Bane. It was all just some fake giant corpse, dragged back from the dead and subjected to tests.

Dent confesses they needed a team who would intimate people, which is all Jason needs for confirmation.

Now, an hour ago at Task Force Z headquarters, Jason shoves the front page of the Gotham Gazette into Dent’s face. An image of Bane flying through the Gotham skyline is plastered across the front.

Dent further admits that he knew from the beginning that there was more going on, which is the final straw for Jason. He’s done with Dent, the team, and everything. Bloom played both of them, and Jason will end things his way, once and for all.

Observing that entire interaction from the security of Powers International, Bloom shows Gotham why those associated with Task Force Z are bad people. Just then, the wall implodes, and Gotham Girl demands to know where her brother is.

Their reunion is swift, interrupted by a blaring alarm announcing an intruder. Jason Todd, as Red Hood, makes his way through a slew of rent-a-cops before running into his old ex-teammates. The brawl is brutal, Deadshot, Man-Bat, Arkham Knight versus Red Hood, which stalls when Deadshot hits Jason point blank with a shot to the chest.

The blast sends him flying straight into Gotham’s chest, and the brawl continues, only to be brought to a final end by Gotham Girl, whose fist ends the discussion by connecting solidly with Jason’s face.

In Powers International lab, Mr. Bloom watches the ongoing fight as Geri Powers storms in, horrified by seeing Acheron’s face severed from his body in a lab vile. Geri Powers will no longer countenance his behaviors and storms out.

In the tunnels under Central Gotham, Harvey Dent leads the remaining members of Task Force Z when the wall beside them is blasted open, and Bloom chares through, adorned by a somewhat altered version of Arkham Knight’s costume. Unfortunately, the fight doesn’t last long and ends with every member taken out of commission and Harvey Dent awakening from darkness to lie bound and tied beside a grumpy Jason Todd.

Another man stands over them, wearing Jason’s costume, as Bloom explains his overarching schemes. It starts with him stealing Jason and Dent’s memories and implanting them in other people to ruin whatever is left of their reputations. Next, he’s going to vanish along with the Lazarus resin that he developed, and he only knows the formula after draining Power’s International’s bank accounts.

Jason comments that Bloom’s plans sound good and all, but there’s just one problem; he has a radio transmitter in the arm of his suit, and now Batman has just heard the whole conversation. At this point, the entire Justice League is probably on its way.

Starring at the arm in front of him, the Red Hood imposter plays with a switch saying that he has no memory of a radio transmitter, aside from the switch that doesn’t do anything.

Desperately, Bloom screeches at him to not touch, but too late: a massive explosion rips outwards, shattering the night in a fiery detonation.

Analysis: Mr. Bloom’s four-step plan to ultimate success is stymied by a classic “look over there” trick from Jason Todd in Task Force Z #11. The massive explosion that followed didn’t seem like one that most people, human, dead and then brought back to the living, or any other form or modified could just walk away from, but clearly, there is more to the story still.

Overall, a lot of big questions have been answered; turns out that Bloom’s intentions seemed to stem way more from a “just for the hell of it” attitude than a meticulous plan for world domination fueled by anger, money, or power. In some ways, while the motivation behind it all does fit with the character, I was ultimately expecting something more. More intense, dark, or twisted, I’m not quite sure, but perhaps out of the realm of “let me just mess with your head, his head, and make off with a patent and tons of money.”

The return of the Gothams brings new characters into play, and it wasn’t clear whether or not the explosion impacted them. The rest of the Task Force are left to a fate that might this time be permanent, although there is always a chance since clearly, the Lazurus Resin is still out there. It’s a testament to the writer Matthew Rosenberg that when Solomon Grundy was left hanging through the ceiling by Bloom, I actually felt a little bit sad.

Jason is now bereft of his team, or self-proclaimed ex-team, and he’s still in a world of trouble. Hey, maybe Batman and the Justice League will show up! While that would be an incredibly entertaining issue to read, I get the sense the next one will have its own surprises.