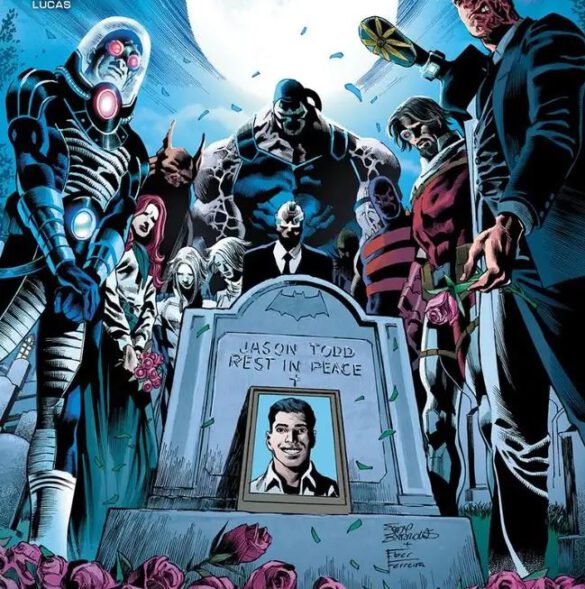 Overview: In Task Force Z #12, Mr. Bloom’s plans have come to a head, and he is determined that it ends with the deaths of Jason Todd and Harvey Dent.

Synopsis (spoilers ahead): The opening scene in Task Force Z #12 depicts Powers International Headquarters, currently nearing collapse thanks to the bomb in Jason’s suite. Inside and covered in smoke and debris, Bloom shrieks in indignation at Jason’s crazy move.

Thanks to the explosion, Jason and Dent manage to free themselves and square off against Bloom, the Gotham siblings, and a still mind-controlled Man-Bat. Bloom grips a case containing the remaining Lazurus Resin, which is knocked out of his hands by a hysterical Grundy, who’s determined not to be buried again.

Grundy smashes his way out of the building and through a window, destabilizing the building and forcing his two other teammates to hitch a ride with Man-Bat to follow after Grundy and escape alive before the whole skyscraper crashes to the ground below.

Scrambling after them, Bloom gathers the remaining Lazurus Resin tubes as he and the Gotham siblings follow right on Dent and Jason’s heels.

The result is the entire building going up in a massive explosion, and shortly after, Gotham slams into Jason with a bellow of rage while Bloom and Dent duke it out.

As they go crashing through multiple windows, buildings, drywall, and a few office desks, Jason shouts at Gotham that he needs to come back to his senses; Bloom messed with his head like he did everyone’s, and the memories in there don’t belong to him. Gotham is one of the good guys; Batman saw the good in him like he did Jason, and then they both lost everything.

Jason knows what Gotham’s going through, and he knows that once someone starts down that path of revenge and anger, you’ll spend the rest of your days trying to find your way back.

Gotham remembers what Jason did to him. However, his skull was bashed in, and then he was subsequently pushed off a roof, but only because Jason was manipulated into thinking that Gotham truly was Bane.  When Bane killed Alfred, he killed the best man Jason ever knew, and for that, Jason would kill Bane again if he had the chance.

Gotham realizes that his memories are false and that his and Jason’s pain was used against them. As Bloom stands near them, Jason points at the villain and tells Gotham that he was the culprit behind it all.

Gotham roars in a rage, and Bloom would be finished if it weren’t for a failsafe he built into Gotham’s head, rendering him incapacitated. Jason doesn’t waste time jumping into the fray but soon finds himself brought to a halt by a gun against his head, gripped by Havey Dent, now Two-Face.

Bloom informs Jason that he had some time to poke around in Dent’s head before Jason blew up his building; turns out boring old Harvey was just barely stopping his alter ego from getting free, so he gave him a nudge.

Bloom is shocked once more, however, as Dent orders Jason to duck and unloads his clip into Bloom’s head and body. He’s not the only person with a bone to pick with the guy, and Gotham, recovered from Bloom’s actions, grabs him and takes off into the night sky.

As the two men stand looking up at Gotham’s path above, Jason comments that he really thought Two-Face was back. Gazing at Jason sadly, Dent replies that the one nice thing about being guys like them is that it’s pretty hard to break what’s already broken.

The ground shakes somewhat as Gotham returns, empty-handed, and tells the others that they no longer need to worry about Bloom. Joining her brother, Gotham Girl and Gotham depart after he chooses to forego the resin and live the rest of his life out on his own terms.

As they stand in front of the remains of Geri Powers International headquarters, Dent tells Jason to go; it’s high time he answers for something, and Jason can still do more good out in the world than locked in a cell. He still believes in Jason Todd, and as they grip hands, Jason thanks him and wishes him good luck.

Jason departs into the smoke, disappearing, and Dent reaches down and grabs the case with the remaining Lazarus Resin, murmuring his thanks to Jason, and shortly disappears as well.

Inside the Batcave, Bruce holds a letter written to him from Jason, apologizing for all the things said and for all the things that Bruce wanted him to do but couldn’t. Inside an airport lounge, Stephanie Brown recites the closing line of Jason’s letter to the man himself, who sits with a cap low over his face and a newspaper in his hands.

Jason asks her how she found him, but Stephanie only tracked him down to say goodbye and asks him why he’s leaving. Jason responds that the past few months have shown him a lot of himself, and he’s realized he has wounds he’s never taken the time to heal. So now, he’s going to go and try to make himself whole for the first time.

Gazing at his boarding pass, Stephanie comments that West Texas was the last place the Joker was spotted. Jason doesn’t reply for a moment and instead gives her a hug, telling her to take care of herself. With that, he departs.

In the Gotham Morgue, the two morticians conducting the autopsies on the bodies of Madame Crowe, Deadshot, Zsasz, Arkham Knight, Man-Bat, Copperhead, what is left of KGBeast, and the man in the Red Hood armor are shot dead. The corpses are given Lazarus Resin, all except Man-Bat, and as they arise, Harvey Dent, now Two-Face, welcomes them back to life.

That Lazarus Resin could have kept him alive for a very long time, but instead, he used it on all of them. So by his math, they all owe him their lives, and it’s now time to get up. Because Two-Face has some very big plans.

Analysis: Mathew Rosenberg and Eddy Barrows bring a finale with Task Force Z #12, which sees the Task Force disbanded and yet reformed, Jason Todd reported dead once again, yet still very much alive, and the end of Mr. Bloom (although where he ended up, exactly, remains very nebulous), and the return of Two-Face.

All in all, the series was a fun one, delivering an entertaining story that highlighted some more serious themes like repentance and regrets with comedic lines and gritty, contrasting art. There was a lot that it touched upon that in the end, while I think the story was strong and progressed well, it didn’t dive into some of those themes as much as I wished it would have.

Ultimately, it did feel like everything was a bit rushed when begin wrapped up in Task Force Z #12 – Gotham coming back to his senses, taking care of Bloom, and Jason deciding to go on a journey of true healing and then sending Bruce a heartfelt letter (not totally sure where those positive vibes came from) seems to have all happened a bit quickly.

The constant moral wars that Jason struggles with, his relationship with Batman and the rest of the family, and Harvey Dent’s desire for some good to make up for all the evil are all aspects that I wished we had gotten to focus on at least a little bit more. Additionally, I think if the story had ended with a positive, healing moment or an interaction that was on the road to a good conclusion between Jason and Bruce, that would have made the series different from other stories and provided a breath of fresh air. It looks like Jason’s journey isn’t over, however, as he might pop up in Rosenberg’s new series, Joker: The Man Who Stopped Laughing. How the impact of Jason’s time with Task Force Z and if he truly meant what he said to Gotham and Stephanie might still be revealed.

Task Force Z was a good read with great sarcastic exchanges between the characters. While I wish it had taken its time with some of the deeper themes it touched upon throughout the issue and presented a familial relationship within the Batfamily that could solve problems by just simply communicating, it balanced the horror elements with funny moments and prompts such as do the ends justify the means and does your past define you. The characters were well done, the art stimulated the story, and ultimately this series stands as a good addition to comic books.