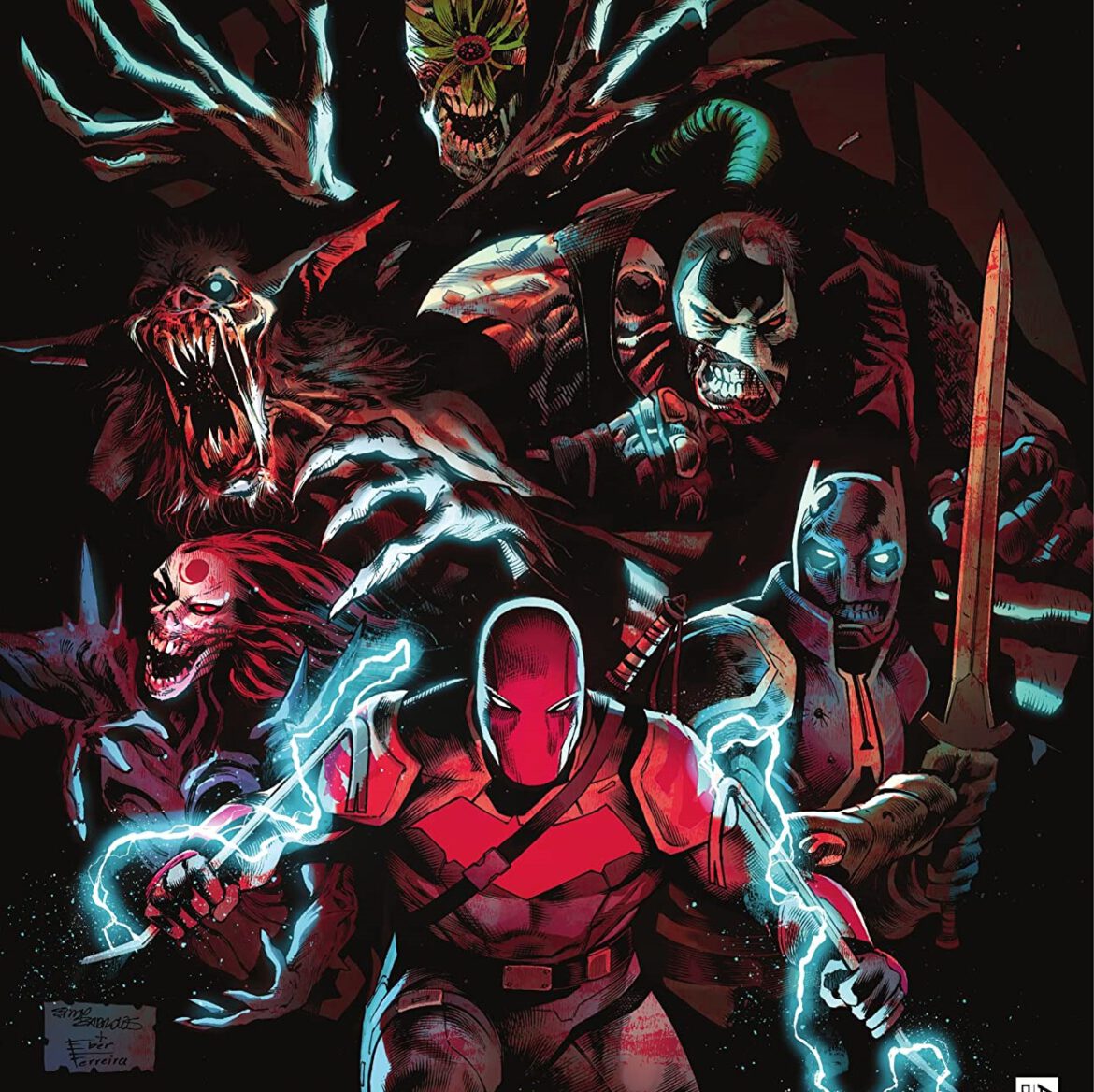 Overview: In Task Force Z #1, a group of undead metahumans led by the Red Hood is brought together by a mysterious benefactor to create Task Force Z.

Synopsis (spoilers ahead): Task Force Z #1 begins as we see Crazy Quilt running frantically across the rooftops in Gotham City and cries out desperately he scrambles away from the monstrous form of Man-Bat, narrowly avoiding being eaten by the creature.

By some stroke of luck, he manages to shoot a beam of energy into Man-Bat, successfully killing the villain, and takes a moment to bask in his unpredicted glory. His moment is cut short by a crowbar to his jaw and then suddenly Crazy Quilt shrieks in terror as he’s lifted up by Bane, now fully at the mercy of none other than the Red Hood.

The former protege to Batman has a few simple questions for the C-list villain; who he’s been working with since Crazy Quilt escaped from Arkham and what they’re smuggling. And, after considering, what the hell is up with Crazy Quilt’s atrocious mustache.

Satisfied with his result, Red Hood radios in. “Field Leader to Central. Target has been captured. We need pickup. If you want him in one piece, you might want to hurry.”

Back at Project Halperin HQ, a.k.a., the Chop Shop, Jason Todd exits the decontamination shower, inquiring if Dr. Shelley is enjoying the view.

Her response is non-pulsed; she’s much more interested in dead bodies, and he wasn’t in the shower for the recommended amount of time. Jason was in contact with Man Bat’s bodily fluids, and the Lazarus Resin used to keep him and the others operational shouldn’t come in contact with living tissue.

Task Force Z is a team of mostly dead- but once again living-villans (zombies, but not referred to as such for propriety’s sake) led by the Red Hood, held in check and held together with little pills containing the liquid and magic from the Lazarus Pits. In Dr. Shelley’s words, the resin is injected into homicidal metahumans, brought back from the dead against their will to be used as undead weapons. Weapons with diminished cognitive ability and minor cannibalistic tendencies.

Jason follows Dr. Shelley out of the room and down the hall, pausing to step into a side room after he notices a woman casually lounging within. She’s knitting, actually, and introduces herself as Ms. Hobart, although Jason can call her Hanna if he prefers.

They talk briefly. Hanna is severely offended at Jason’s use of the word monster, after all, those are his teammates he’s referring to. Jason sneers. He’s there barely of his own free will, but it’s his job to keep those monsters, which are barely alive, from eating civilians.

Hanna isn’t impressed. In her eyes, where one sees a monster, another might see a soul struggling for redemption. She eyes Jason keenly while asking what he sees. Before Jason can answer and find out what it is exactly that this strange woman does, a voice belonging to a person named Crispin telepathically asks Jason to step into the hall.

Crispin instructs Jason into yet another room in the H.Q., a solitary cell where Crazy Quilt is restrained. He’s refusing to talk now, and Crispin isn’t behooved to entertain that. Jason and Dr. Shelley observe safely from one side of the room through clear glass doors as doors on the opposite end open up and the Arkham Knight steps into the room. There is only one goal in the metahuman’s mind: eat.

Jason orders Crispin to call the Arkham Knight off, claiming that it’s torture. In Jason’s opinion, Crispin shouldn’t have captured him if he wasn’t prepared to actually put up with him. According to Crispin, Jason wasn’t captured and isn’t being held against his will, although Crispin is the only thing keeping him out of prison, so he should probably stop complaining.

The Arkham Knight is called off and Crazy Quilt is more than ready to actually talk this time. Crispin orders Jason to suit up. He’s going back out.

In the streets of Gotham his team of Bane, Man-Bat, the Arkham Knight, and Mr. Bloom, Jason instructs them to keep the destruction to a minimum and absolutely no killing. They’re going after small-time crooks offered up to them by Crazy Quilt, and it just might be what they’ve been looking for. They’re dropped at a warehouse, which upon entering they find boxes of Lazarus Resin covered in frozen ice, courtesy of none other than Mr. Freeze. He and his henchmen aren’t all that happy to see interlopers at their door, and no one wastes any time attacking the other.

As Jason had mentioned many times back at H.Q., Task Force Z isn’t a team, and that’s made plainly clear as they’re each subdued, frozen by Mr. Freeze. Jason decides to take matters into his own hands and manages to defeat Mr. Freeze, but in the process cracks his cooling suit. A few seconds later, frozen ice explodes out, sending Jason flying and then freezing him over. Stuck and unable to move, Jason struggles to free himself and call out to his team, unsuccessfully.

Amidst the ice and snow, a ‘clicking’ sound reaches his ears. Jason turns his head to see the Arkham Knight crawling towards him, blood and slobber dripping from open jaws.

Analysis: Task Force Z #1, written by Matthew Rosenberg and illustrated by Eddy Barrows with Eber Ferreira and Adriano Lucas kicks off strong and without preamble. A group, not quite organized enough to be called a team, of resurrected metahumans who were once villains, are being used as weapons, kept alive and in check through the power of the Lazarus Pits. Criminals once left dead after an attack on Arkham Asylum are now being given, or one might say forced, a second chance at life, and Jason Todd is the linchpin keeping it together.

Both the story and the art are solid. The colors and muted tones in the issue fit extremely well and give an added feeling of mystery and unease. The panels are dynamic and active, changing from page to page, while the story throws you right in and leaves the readers almost as confused as Jason. Who is this Crispin person, what are they after, and what’s the deal with that Hanna lady?

Crispin, a mysterious individual, perhaps part of a bigger organization, has brought them together and placed Jason Todd as team leader, regardless of if he’s happy with the decision or not. Despite the grittiness of the story seen in Task Force Z #1, it’s also somewhat comedic; not only is he playing detective, but also babysitter to each undead metahuman. Jason Todd is no stranger to violence and death, but he has a moral code, one that doesn’t permit the murder of civilians or letting his zombie ‘teammates’ eat people. The dynamic between the characters is fun and amusing, founded upon the fact that the Red Hood’s most common command is most likely along the lines of ‘no eating people.’

The story indulges in the philosophy of redemption–does one see a monster or a soul seeking forgiveness–and has the perfect setup for an awesome series. Jason Todd has his own struggles and hasn’t had much patience or sympathy for the wicked in the past. Inserting him as the leader on a squad such as Task Force Z offers a new environment to develop his character.

Task Force Z #1 is a fun and interesting read created by Rosenberg’s script and dialogue and the art team’s dynamic illustrations. The is a lot of potential for this series to not only develop Jason Todd’s character but give long-time fans something new and creative to read. I’m interested to see how this series might create its own identity when compared to stories such as Suicide Squad and Task Force X, and where it might progress from here.