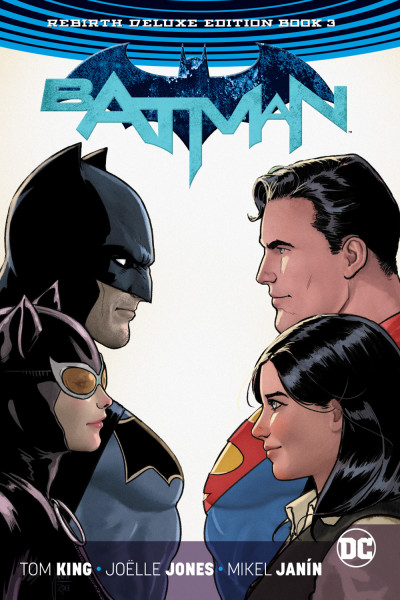 Editor’s Note: This time around we are reviewing Batman: Rebirth Book 3 as a new deluxe edition is releasing tomorrow in comic stores. While not a review of the new collected edition itself, this is a review of the story as a whole rather than the individual issues as the site typically reviews. You can pre-order your copy of the new release by heading over to Amazon.

Overview: This new edition collects Batman #33-44 and Batman Annual #2 which were originally published from Fall 2017 to Spring 2018.

Synopsis (spoilers ahead): Following the events of the War of Jokes and Riddles, as well as Catwoman excepting Batman’s proposal, the now engaged couple set off to clear Catwoman’ss name. They travel to Khadym where Batman’s ex-lover Talia al Ghul currently rules. However, this is also a place where the Justice League have agreed to never go. The trip is necessary to clear Selina’s name of over two hundred murders as they seek a confession from the real murderer.

While Bruce and Selina fight Talia and her minions, Alfred breaks the news of the engagement to Dick, Damian, Jason, and Duke to which all of them seem shocked. Damian decides to race off to help defeat his mother in Khadym only to have Superman and Nightwing stop him. After getting what they are after as well as an approval form Talia, Catwoman drags Batman out of Khadym to meet up with Damian and Dick for some help.

The next issue is split between Batman and Catwoman arguing while Superman and Lois Lane are also arguing about the same thing in different ways/viewpoints. It all has to do with how both Superman and Batman need to meet and discuss the engagement. This is all happening while both couples work the same supervillain case with both couples ending up at the same place and the same time.

This leads to the two couples deciding to go out on a double date after the bad guy is defeated. The date progresses at a costume night at the county fair which has the couples needing to switch costumes (except Catwoman going civilian) to gain entry. The night proceeds with the boys discussing each others’ relationships and trying to one-up each other playfully as the ladies have a similar interaction.

The next issue is the annual which stands alone and tells the tale of the Bat and Cat’sever-evolvingg relationship starting with how Catwoman knew who Batman was right away and taunts him into having him chase her constantly. Catwoman also believes she has to make Batman better and teach him where he’s weak. Flashing forward many years Bruce and Selina have grown older and have received bad news from a doctor about Bruce. Bruce passes away in bed surrounded by the family he has built with Selina as she tells him she loves him one last time. The story ends with her going down to drive the Batmobile once more only to find a black kitten waiting for her. Bruce had thought ahead and left it as a sign of his love for her.

Jumping back to the present, Bruce Wayne is visiting the recently orphaned son of a Wayne Enterprises board member having been through the same thing as a child. While on the case as Batman, Bruce is led through a twisting maze of villains from Victor Zsasz to Two-Face. Leading him to Mr. Taylor, the boy’s butler. Thinking the case is solved, Bruce and Selina sit down for dinner only for Bruce to realize that it was really Matthew who killed his parents to have a similar story to Bruce Wayne. Matthew is then committed.

In the next story arc, Woman Woman and Batman help the Gentle Man, an otherworldly warrior, by giving him one day of rest from his thousands of years fighting The Hordes of Gehenna. The catch is that Batman and Wonder Woman don’t know that time moves differently in the other dimension and the Gentle Man does not want to go back. After lasting thirty-seven years in the alternate dimension, Catwoman persuades Gentle Man to return so Batman and Wonder Woman can return.

The next two issues involve Poison Ivy invading everyone’s dreams and controlling them. Batman is able to wake up and cure Catwoman and himself before Ivy has control of them. Batman and Catwoman try to play along and distract her many eyes from what they are truly doing. This ultimately fails as they are caught by the mind-controlled Justice League. Batman reveals he knows Ivy is controlling everyone by making everyone eat “greens”. This angers Ivy and she makes Superman shatter Batman’s face. Bruce wakes up alive after being treated by Harley Quinn, while Selina talks to Ivy. Bruce reveals he knows about Ivy and Harley’s relationship and how Harley Quinn isn’t under Ivy’s control like everyone else. Batman brings Harley to Ivy to help her see she is not well. He tells Ivy she didn’t kill the five men she thought she did during War of Jokes and Riddles, as it was really the Riddler that did the killing not her. After releasing the world from her grip, Ivy is sent to the Sanctuary.

The last issue of this collection shows Selina on a personal mission to find her perfect wedding dress while remembering some of her personal interactions with Batman. Being Catwoman she breaks into the wedding dress store and proceeds to reflect on her twisting life leading to this moment. And of course, Selina settles on a black dress.

Analysis: Now when Tom King first started writing for Batman for Rebirth it seemed to be slow and his characters were somewhat stiff. But he has grown into a fully matured writer giving his story breath and depth. While reading the interactions between Selina Kyle and Bruce Wayne you can see he has a real love for these characters that very few people have to be able to write a story about these two in this way.

While both being supporting and playful, Tom King writes Catwoman as a uncompromising antihero and the perfect leading woman to Batman’s dominating personality. On the flip side of this relationship coin, King has Batman being both vulnerable and commanding in ways we rarely see in other Batman adventures. Normally it is Batman being dark, mysterious and all knowing with a quick answer or a keystroke away to almost all problems.

The split story telling between Superman/Lois Lane and Batman/Catwoman is particularly entertaining, viewing both relationships at the same time and how each couple interacts with there better half. When both couples go out for dinner, seeing how all four characters interact, was particularly well done with it ending with Bruce and Clark having to show who is better as always.

Now if you can’t find an artist you like in this collection, you aren’t trying hard enough. Joëlle Jones, Clay Mann, Lee Weeks (one of my personal favorites), Michael Lark, Mikel Janín, Travis Moore and Hugo Petrus all bring their very best to each issue or page they worked on. Joëlle Jones action is perfect and her simple framing for Alfred breaking the news to the Robins is very elegant. Clay Mann’s issue of the two different couples in different lights is perfect going from Superman’s light to Batman’s dark is almost seamless. Mann’s couples night out is particularly entertaining as the couples intermingle with civilians in each other costumes. Lee Weeks’ art for the annual is a perfect fit for this tale building the Bat and Cat up. You almost don’t need words to see what is happening with this art work. Travis Moore’s part in these tales almost acts like a play on stage. Showing how Matthew is devastated while seeking guidance from his idol Bruce Wayne, while at the same time giving subtle hints at his madness. This all happens without giving you the full picture until the end as all good murder mystery stories should. Mikel Janin’s art for Poison Ivy and Harley Quinn is stunning with touches of tenderness. Janin’s view of how Ivy controls plants is particularly interesting as they flow and create to her every whim. Hugo Petrus’s art is a small addition to this great lineup. He works it in so smoothly you don’t even realize there is a different artist in the book unless you read the credits. That takes skill. I honestly can’t find anything to say negatively about all this artwork. It’s all amazing.

Overview: This collection is a great example of what writers and multiple artists can do together. You would be hard pressed to find a story so finely written and crafted with art. If you truly want to be enveloped in a story that will leave you wishing for the next collection I suggest picking this collection up. Sit down and read it. Then pass it along to friends who say comic books don’t have any romance in them, this will prove them wrong.