SDCC 2015 Exclusive: Dan Jurgens on the Future of Batman Beyond 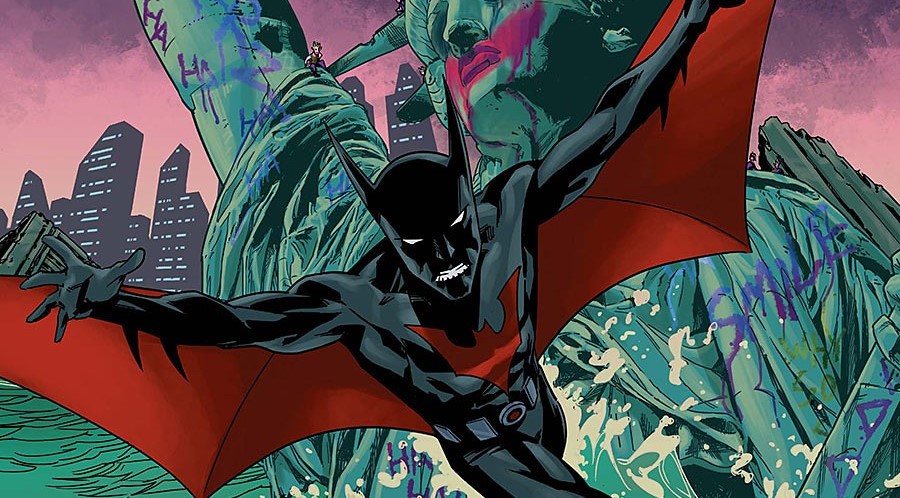 Over the weekend, TBU was able to talk with a number of creators for the Bat-Books. Throughout the week, we will be bringing you these exclusive interviews.

First up, we had a chance to talk with Dan Jurgens about his work on Batman Beyond. The new series which kicked off last month has Tim Drake in the mantle of Batman after traveling through time at the end of the Futures End series this past spring. We mostly spoke to Dan about the characters that have appeared in will be appearing. Here is what he had to say.

TBU: So going a little further back from Batman Beyond #1, how did you ultimately come to the decision to put Tim Drake in the cowl?

Dan Jurgens: I always look at Batman Beyond, in what we’re doing with the book, think of it as a triangle and one corner we have the classic Batman Beyond animated universe, in the next corner we have the classic DC future timeline, the ‘Great’ Disaster stuff and the third corner is represented by Tim Drake who stands in for DC’s present. And if you take those 3 elements, the Batman Beyond animated future; the DC classic Great Disaster future in DC’s present and put it all together that’s how you get one cohesive future timeline, which is what we’re trying to do here by blending the best of all worlds.

TBU: How is Tim going to stand out as a Batman but also honor Terry?

Dan Jurgens:  A couple of ways, one of which is Tim; I think it’s important to recognize that Tim Drake is a great character in his own right. He was smart enough as like a 12 year old to figure out that Bruce Wayne and Batman are one in the same. He’s a really bright guy but I think what makes him different and why it’s going to work as Batman Beyond is, I’ve always seen him as someone, because there was a Robin that came before him, do you really then look up to the concept of being a Robin? Even more so now if you adopt the name Batman, do you live up to that? And that’s part of the challenge for him, he has a little bit of self-doubt so… he recognizes the mantle that he’s taken on both from Terry McGinnis and Batman and he’s trying to live up to it and we always get that voice of doubt in the background, in the person of Matt McGinnis, who is Terry’s younger brother. Basically it’s that wait a minute why didn’t I get the suit? So I think that really starts to pull together to make for an interesting character driven story.

TBU: Yeah and you’ve seen that first issue that Matt is a little resentful that he didn’t get it. So what is the relationship going to be like in the future?

Dan Jurgens: He is, but that will be stay tuned because obviously it has started out a little bit rocky and then we also add Barbara Gordon to the mix and Barbara as she was in the show is now police commissioner of Gotham City and we have some fun surprises coming up with her, but that’s where it’s great to have someone used from the future and the past, you have Tim from the past, you have Matt from the future but when you blend it all together, that’s how it all becomes more of a seamless story.

Dan Jurgens: We see Max. We have seen Inque, if have you seen the second issue. Batman Beyond has such a great Rogues Gallery; you think of Spellbinder, you think of Shriek, you think of everybody that goes on from there and we’re certainly going to get in and explore them. TBU: Any other classic characters that we can look forward to coming in?

Dan Jurgens: I think we have some classic characters. We have a huge surprise coming in right at the end of #3 and I think when people see that, they’re going to say, what are these people doing? I think it’s going to drive the book in a really good, solid direction and we really are committed to the idea of each issue having to end with that sense of surprise. We had Barbra Gordon in issue #1 that took everyone by surprise and that’s sort of our mission today, which is every issue needs that, “What are they doing?” sort of feeling at the end that makes you want to go out and get the next issue.

TBU: Something that’s been really special about the Batman Beyond TV series and other incarnations is that we got to see Terry outside of the cowl, is that something you’re going to look for or do with Tim?

Dan Jurgens: Yeah, once we get past the first six issues, you can’t leave a character in the costume all the time. You have to see him outside the costume and its how will Tim go into this world of the future. It’s a very different place for him and it’s a place that exists in a way because he failed to destroy Brother Eye back in the past, he has to make up for that.

TBU: Speaking of Brother Eye, he’s always going to be in the background. Are you going to sort of fill in with villains but then always there in the back of Tim’s mind is Brother Eye?

Dan Jurgens: I think what it is, is that Brother Eye is mission one, but then yes we have to grow beyond that into an environment where we have a lot of different villains, that is the richness of the Batman Beyond animated universe and we need to use that.

Batman Beyond #2 just released last week and is in stores now.