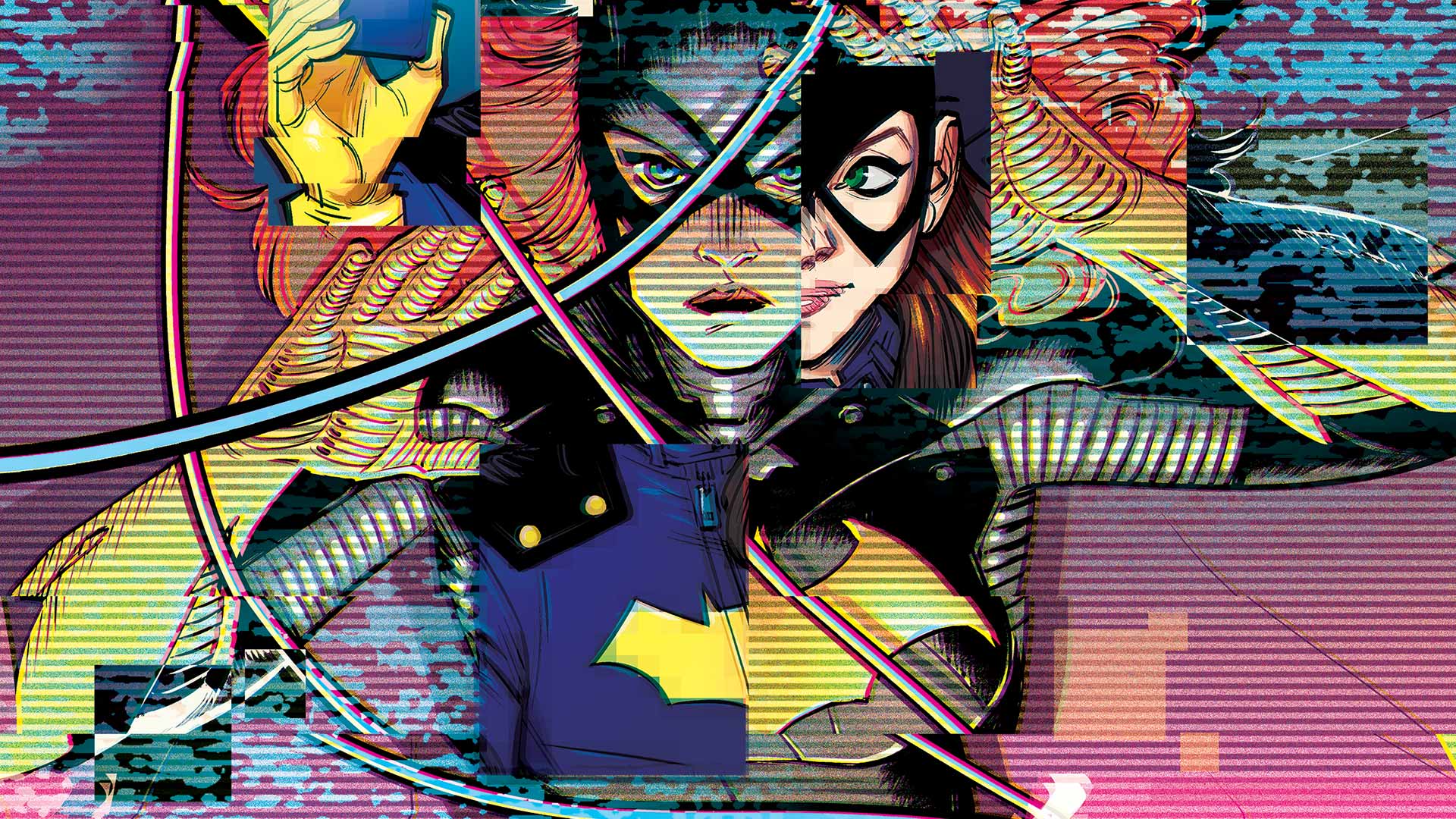 In our next interview from Comic Con International, we spoke with the creative team behind Batgirl with writers Cameron Stewart and Brenden Fletcher and artist Babs Tarr. A lot has been happening in the book and we discuss Jim Gordon as Batman, shipping with Luke Fox and find out about the new Velvet Tiger.

TBU: With issue #41, I like to call her ‘Digi Babs’, you know the Digital Babs, but it seems like she’s not completely gone. Are we safe? Is she completely gone? Because we saw the children of Hooq, they’re worshipping something. Could she make reappearance?

Brenden Fletcher: Stella, Gotham is never safe. Have not learned that yet?

Cameron Stewart: Anything is possible. The children of Hooq was there because of the two month break for Convergence and we wanted to start with kind of a cute little wink to the previous storyline. It was meant to be like the beginning of a James Bond movie, like the cold open, like she’s on a little adventure before the main storyline gets in.

TBU: A lot of changes coming down the pipe for Babs. One of them is Frankie. How much is she going to be part of these missions? We’ve already seen her in a couple of them.

Brenden Fletcher: Well, this is a big story point for us. Frankie now knows a lot about Barbara’s life. She knows that she’s Batgirl and she knows that Batgirl has been on her own a lot of the time and she loves Barbara and wants to be there for her both as a friend and now as a partner. But is that something that Babs wants? Is she comfortable with that? Brenden Fletcher: Yeah. Putting Frankie in potentially dangerous situations is not something that Babs is very comfortable with. So it’s something that these two friends are going to be wrestling with over these next couple issues.

Cameron Stewart: Frankie is pretty head strong. Frankie has her own ideas of what she wants to do.

Babs Tarr: The funny thing is they both have that need to like do justice. I think Frankie feels really inspired by Babs like when she found out that she was Batgirl; you’ll see what happens.

TBU: You’ve been dangling a carrot in front of us for a little bit for about what Frankie’s handle is going to be, when is that going to drop?

Cameron Stewart: That carrot is going to continue to dangle for a while.

TBU: Okay, okay. Another change is her father being Batman. How is this going to change their relationship? We’ve sort of seen it a little bit.

Cameron Stewart: Well, it changed the relationship. We have a scene where Jim Gordon comes out to her as Batman. He reveals to her that he is the new Batman because he feels like he can’t keep a secret from her. He’s not supposed to tell anybody, but the one person he’s going to confide in is her, but she can’t tell him that she’s Batgirl. So there’s an interesting dynamic where she almost feels like she’s guilty for keeping a secret from her own dad when he trusts her from his most private secret.

TBU: We’ve seen some conflict between Jim and Batgirl prior in the series, so how is this conflict going to be distinct from the earlier one?

Brenden Fletcher: I think that Jim has made some progress in how he believes Batgirl operates, and now when he is Batman, he’s under orders from the GCPD to act in a particular way. So I think that what you’ll see in the coming issues is Jim balancing his own feelings with his orders and I think it goes from there and you’ll see how that plays in issue #42. No spoilers.

TBU: Romance for Babs, there’s that solicitation with her and Luke. Can you say anything about that?

Brenden Fletcher: We were ordered by Babs Tarr to include make outs and flirtation and we…

Brenden Fletcher: So we’re going down the Bat family list. Babs Tarr: They’d make a great fit though. He’s in the tech industry and has a history in a bat-suit, so I think it would be a good match.

Brenden Fletcher: Yeah, Luke Fox. I mean if you know the history of his family, has been in a world that has been involved in development of technology. He was given a suit that is not unlike the suit that Iron Man wears, I guess. But there’s a lot of technology built into that he can maybe use to build a startup company with, and there’s a startup company in Burnside. There is this startup culture in Burnside and so it’s something we thought was a natural fit to bring him in to make him the new interest.

Babs Tarr: We’ll see how smooth it goes and see how long it lasts.

TBU: Remember I’m a Dick and Babs shipper, so you’re letting me down slightly, but I’ll go with it.

Brenden Fletcher: Are you talking about this guy who is…

TBU: Your first arc was, I would almost describe it as a series of one issue vignettes, which sort of had this overall theme connecting it and then culminating it in the big villain. Is that something you’re going to pursue with this second arc?

Cameron Stewart: We’re trying to give it a little more room to breathe now, so rather than have these very dense single issue stories, we’re allowing them to stretch out into two issues if it needs to, just for a little more room to kind of develop things. And there are always going to be threats that carry on through a longer story arc.

TBU: I’ve got to talk about Velvet Tiger as I actually just covered her second appearance in Batgirl to Oracle and her history is crazy for both pre-crisis and post-crisis. Can you tell me a little bit about her back story? Her brother is an important part in her history. Is Ward going to be a part of this? So just let me know about Velvet tiger and what’s going to happen?

Brenden Fletcher: I can’t tell you too much about what’s going on, but it’s an interpretation like everything going on in the New 52. It’s not exactly as it was before, but there are resonances of that and it’s based on the older appearances. So she does have a brother and they do own that company together. I don’t know how closely you’ve been reading Stella, but we’ve been building up mentions of ‘Gilcom’ for the last number of months. But things happen and as I said, we’re playing on the ideas of what a startup culture can mean to Burnside and to Babs’ circle of friends. So Velvet Tiger was a natural villain to bring in here because she actually owns a tech company. So we’re going to play with that and you’re going to see everything kind of unfurl over the next few issues.

TBU: Final question. Regarding Livewire, which was an awesome appearance, you really changed her design to really suit the book. So what made you go to that design and are we going to see that more with some other pre-established villains?

Babs Tarr: Her design was very much inspired by her old costume from the TV show. I thought it was really fun on its own and I wanted to keep that similar silhouette of the little shorts and the one piece. I added some hardware and a cool shoulder thing to give her a little bit of power. For Velvet Tiger though her costume was really bad before, it was like a tiger jump suit, with fur trimming. I can’t do like I did with Livewire where it was like an homage to her old outfit. I kind of took it from start, and kind of revamped it. I was like she owns a tech company. She’s obviously fabulous. She’s obviously in charge kind of like Emma Frost with her fabulousness and then I added in some tiger stripes.

Babs Tarr: I know. Sorry guys. But with her costume I took more liberties on it because the old one was so ridiculous.

Cameron Stewart: I think we’ve taken a lot of liberties with Velvet Tiger in general.