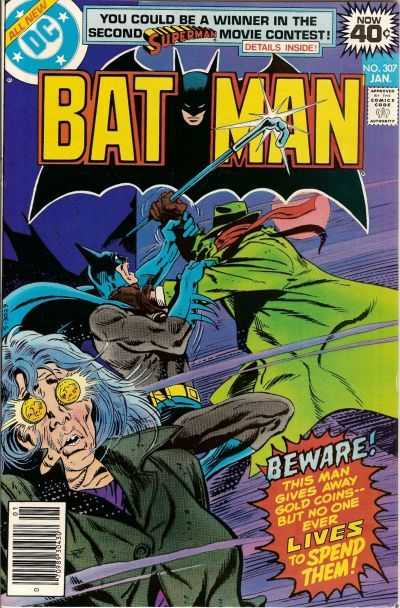 The issue opens with a man in an overcoat, hat and scarf approaching a homeless lady on the street and giving her a gold coin. Seconds after touching the coin, she collapses and dies.

Next the scene shifts to the Wayne Foundation where Lucius Fox casually mentions “Roxxon”. (Marvel reference?) Possibly setting up a future subplot, Lucius tells Bruce that Gregorian Falstaff, a billionaire recluse, bought the top three floors of the Ambassador Hotel. Bruce leaves and because it’s the ‘70s he doesn’t go to Wayne Manor but rather to his penthouse in the middle of the city. Alfred informs Bruce of many different crimes that have occurred around the city but the one that interests him the most is the homeless woman’s death. Wanting to prove that her death doesn’t matter any less than anyone else, he investigates.

A man named Quentin Conroy barges into Commissioner Gordon’s office and demands his coins back, saying the coins the killer is handing out belong to him and were stolen from a safe in his home despite the fact that it’s supposed to be burglar-proof. Batman takes to the streets after questioning Quentin (he was in Gordon’s office the whole time and they somehow didn’t notice him until he announced himself) and meets a homeless Irishman named Shamrock (because he’s Irish, get it? Yeesh…) who escorts him to the sewers where he meets more homeless people in order to learn what they know about the Gold Coin Killer.

After mentioning that many people they know have gotten sick after handling the coins, Batman determines that they’re coated with a poison absorbed through the skin that loses its potency the more it’s touched. After hearing a scream, Batman runs into the Gold Coin Killer and fights him. During the fight, Batman notices a pipe is about to explode and the distraction allows the killer to get away. Having seen his face during the fight, Shamrock’s friends say the killer used to be one of them but disappeared over a decade before. His name was Limehouse Jack Conroy. Batman goes to Quentin Conroy who admits that Limehouse Jack is his father and became homeless on purpose in order to find peace.

The next night, Batman catches the killer in the act and they fight again. The Gold Coin Killer believes he was giving his victims peace, but all of the homeless people we met earlier in the story chime in and say that he was never really one of them. Batman tries to take him away. At first the killer attempts to put up a fight, but then weeps when he realizes what he’s done and his face contorts back into the shape of Quentin Conroy. Batman, when talking to Commissioner Gordon, states that they may never know if it was hatred or perverted love that twisted Quentin’s mind and face into that of his father’s. Surprising Gordon, Batman reveals that he knew Quentin was posing as his father because one heel on his shoes was more worn away than the other, as if he had a limp. Quentin didn’t have a limp, but Limehouse Jack did.

I’ve read before in an interview that Batman is Len Wein’s favorite character and that he always regretted not having a longer run on the character. Seeing as how I’d previously read some fill-in issues he had done for both Batman and Detective Comics, I figured I’d take a look at the closest thing he ever had to a run, beginning with this issue and going to Batman #327, with a few fill-ins by other writers in between.

I wish I could say his run starts off with a bang, an intense, action-packed psychological thriller. While this issue does actually contain some action and some psychological elements, I can’t say it excelled at either. What we get here is an issue that is very typical of the time period in which it was written, which I don’t necessarily mean in a bad way. A mystery is introduced, some investigating and fight scenes happen, Batman solves mystery. The end. I do have to give Wein credit for the idea. A mysterious stranger handing out gold coins to Gotham’s homeless that kill them in seconds is an interesting idea and just the kind of mystery waiting for Batman to solve. Credit must also be given to the fact that Wein resisted the urge to open his run with one of Batman’s big villains, unless he just thought this was another fill-in assignment and didn’t yet realize he would get to be the regular writer. Time will tell whether Lucius mentioning Gregorian Falstaff was a page-filler or setting up a potential storyline. I’m willing to give Wein the benefit of the doubt right now.

Batman letting the homeless woman’s murder take precedence over the other minor crimes Alfred mentioned was a nice character moment. Not only does it show his Holmes-like interest in solving a good mystery, but it also shows that Batman doesn’t play favorites when it comes to crime and everyone deserves to be avenged, no matter what their social status. I have no idea if any of the homeless characters we are introduced to make return appearances, but if they don’t then more power to Wein for giving so much thought into the backstory and even the speech patterns of these characters. They don’t get a ton of depth here but were interesting enough that I definitely wouldn’t mind seeing them again.

For those of you reading this that have only read Batman comics from the ‘90s to the present, it may come as a surprise that there was a time that while Batman was definitely the World’s Greatest Detective, he was not necessarily the world’s greatest martial artist and could sometimes fight average criminals to a standstill. Because the majority of Batman comics I’ve read have been from more recent decades, seeing Batman not immediately wiping the floor with the Gold Coin Killer was somewhat jarring at first, but not completely off-putting. The way most writers today tend to write Batman it can be easy to forget that he is a human being (with no superpowers) that can make mistakes. It also makes storytelling a heck of a lot easier if your character can’t instantly defeat every villain he comes across.

Now, about the fact that Quentin was somehow able to look just like his father…it’s weird. These days this would have been at least two or three issues and we would’ve gotten flashbacks of Quentin growing up and some psychologist explaining that somehow Quentin’s hatred/love for his father caused him to develop a split personality that believed he was his father and over time he learned how to manipulate his facial muscles to resemble his father, but we just don’t have the time in Bronze Age comics so we must accept that he did it and move on. While I wish a better explanation had been given, this time period does come with certain page length requirements and at seventeen pages is even shorter than usual so I won’t judge Wein too harshly for it. This story itself may have just been average the characterization was good enough that I will slightly bump up my score and it does make me anticipate where he will go from here.