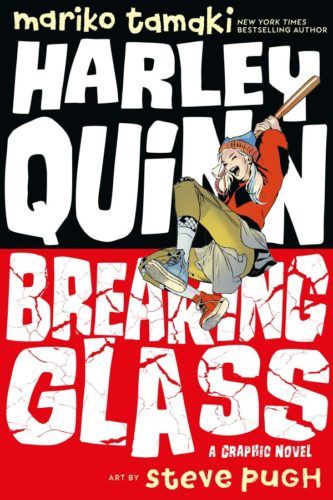 The latest DC Kids release is coming tomorrow in comic stores and will be available at all major retailers next week. Harley Quinn: Breaking Glass is written by Mariko Tamaki with illustrations by Steve Pugh. The new story deals with choices, consequences, justice, fairness, and progress and how a weird kid from Gotham’s poorest part of town goes about defining her world for herself.

Harleen is a tough, outspoken, rebellious kid who lives in a ramshackle apartment above a karaoke cabaret owned by a drag queen named MAMA. Ever since Harleen’s parents split, MAMA has been her only family. When the cabaret becomes the next victim in the wave of gentrification that’s taking over the neighborhood, Harleen gets mad.

When Harleen decides to turn her anger into action, she is faced with two choices: join Ivy, who’s campaigning to make the neighborhood a better place to live, or join The Joker, who plans to take down Gotham one corporation at a time.

Harley Quinn: Breaking Glass is at once a tale of the classic Harley readers know and love, and a heartfelt story about the choices teenagers make and how they can define–or destroy–their lives.

In honor of the release, DC Comics is providing TBU with two copies of the graphic novel for two lucky fans. In order to enter, all you need to do is head over to the TBU Discord, join and enter the contest channel to submit your entry. Contest ends on September 6 at 8AM CT. Winners will be contacted via direct message through Discord. The item will be shipped directly from DC. This contest is open to US residents only.

If you want to get a copy of the graphic novel as soon as it releases, head over to Amazon to pre-order your copy now.