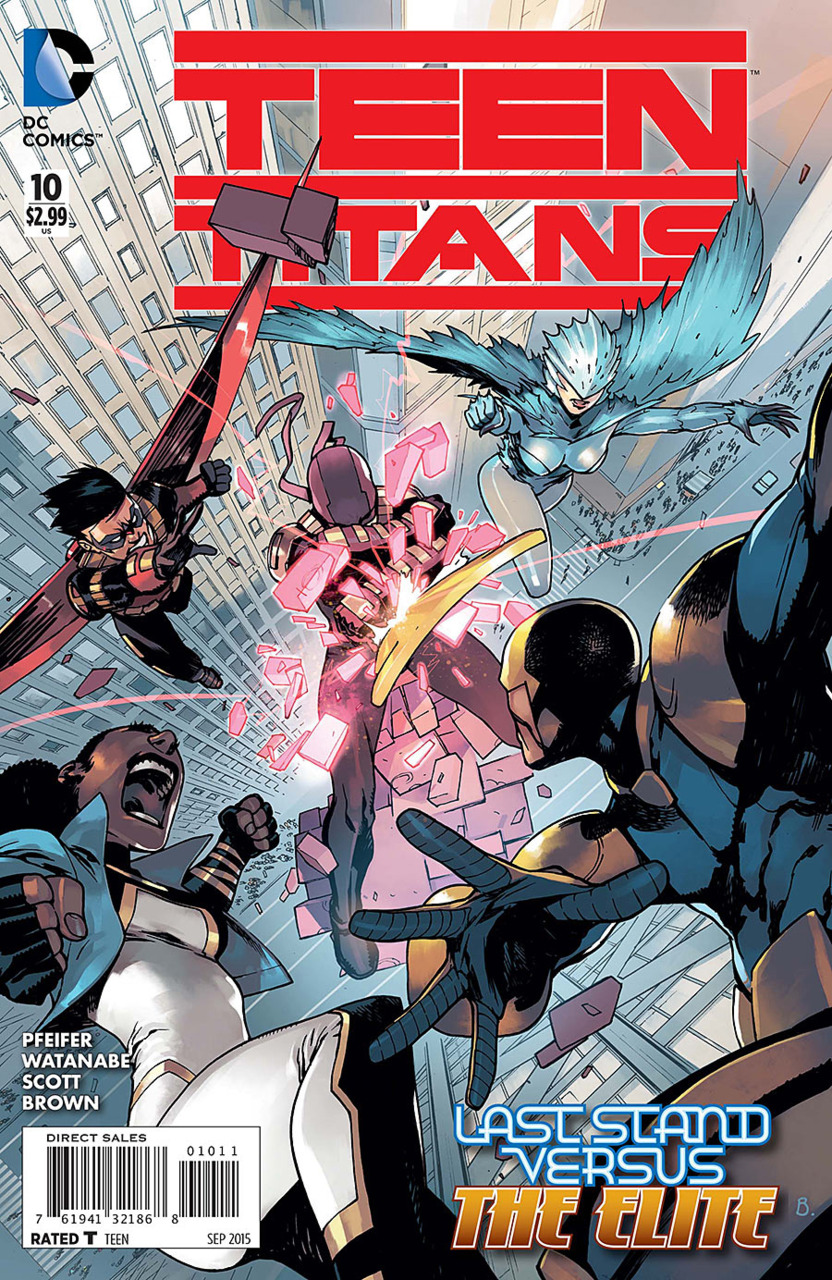 “Rogue Targets Part 2” opens where the previous issue ended with the Titans and the Elite facing off with each other in the penthouse apartment of Chicago’s John Hancock building. Cassie has assumed the leadership of the Elite and her only concern is that the Titans hand over Superboy to them immediately. Kid Flash, a member of the Elite has another desire. Kid Flash confronts Red Robin for abandoning him and Solstice in the future. Somehow Bart was able to escape his sentence by being yanked to the past as he puts it but Solstice was left behind in the future. Nothing is settled because as Bart was closing in on Tim; Gar turns into a hippo and subdues Bart leaving him on the floor.

Red Robin turns his attention to Cassie who continues to want to take Superboy in for the mass murders shown in the previous Annual issue. She puts her hand on Kon and he uses his telekinetic powers to knock Cassie into a television knocking her temporarily out of the fight. Guardian leads the other members of the Elite to attack Superboy. First the Indigo Tribe member Trinity and the Witch Boy Klarion attempts to use their power to subdue Kon. Kon makes little work of Trinity’s indigo constructs and Guardian attacks making a reference to some of Superboy’s last solo issues, since he was held at S.T.A.R. Labs.

While the fight continues Red Robin talks to Raven about locating Manchester Black. Tim thinks that Black has some knowledge about what is going on with Superboy. Raven is able to locate Black in New York. Red Robin and Raven teleport to New York while Superboy punches the Guardian’s shield knocking everyone in the apartment out except for Power Girl. Kon flies away and Tonya attacks him. She jumps out of the window and grabs Kon in midair and attempts wrestling hold on him in the sky. He easily throws her off and she crashes next to a roof top pool. Cassie checks on her and she is all right. Tonya wants a second crack at Kon and Cassie says no, she will handle this leaving Tonya surrounded by civilians taking cell phone photos of her. Cassie soon catches up to Superboy and attacks him.

Back in Chicago Superboy and Cassie square off above one of the bridges. Kon tackles her and crashes through the bridge into the harbor. Wonder Girl blacks out in the harbor and Superboy tosses her out just as Kid Flash and The Durlan, Chimera arrive at the bridge. She is unconscious but alive. Superboy has sped off from the area. The other Titans and Elite members arrive as Cassie awakens. The Elite cannot locate Superboy but they know where Red Robin and Raven are and arrange for teleportation to New York, leaving the Titans behind in Chicago with no way to get to New York.

In New York, Red Robin and Black square off as Raven tries to mind meld with Black to find out what he knows. She gets a mindful; Black shows her where Superboy’s salvation lies. All Raven sees is pain, violence, terror, and suffering. Raven did not see Hell, she saw the Supermax prison. They have to go there to save Superboy. We leave with Raven visibly shaken by her vision with Tim over her and the Elite appearing on the balcony. The next issue: Prisoners.

Basically this issue was a fight from cover to cover. I liked the spread of the scenery from the apartment to the rest of Chicago. It gave an epic feel of this battle. The only complaint I have is that we do not see the Titans in action. All the fighting is the Elite members verses Superboy. The Teen Titans are inconsequential in this issue.

Again we see Raven in distress as she sees this Supermax prison. What caused this? Is it the shock of the prison or something else that has been affecting Raven these two latest story arcs? I would like to see some answers.

I noticed that it looks like it might be possible for the Titans and The Elite to possibly join forces. I still would like some story involving Solstice. Is there any way to get her back from the future? I would like to see her come back as she was one of my favorite characters from the last Teen Titans run.

This issue is the action I was looking for but I have to wonder, what happened to the Teen Titans in this fight.