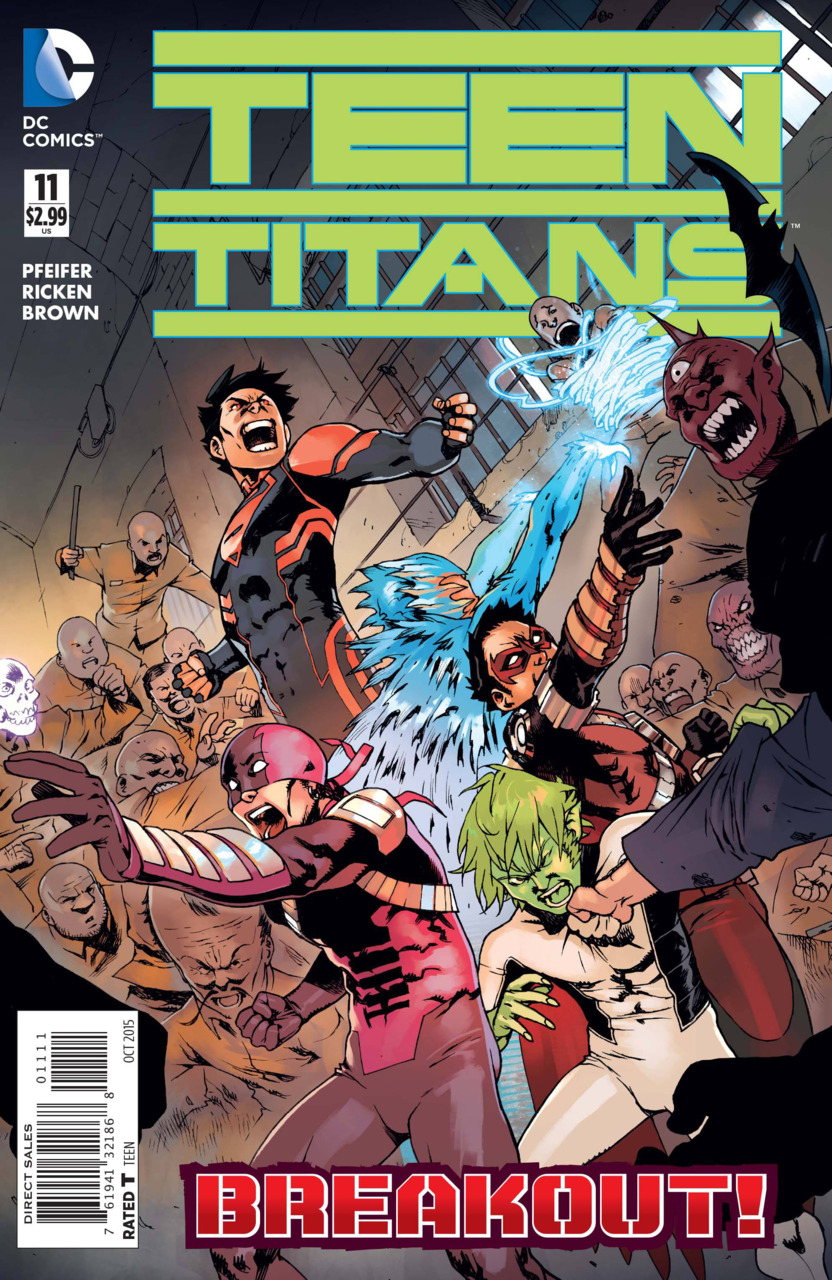 “Rogue Targets” part 3 opens where the previous issue ended with Red Robin cradling and incapacitated Raven in Manchester Black’s apartment with the Elite led by Wonder Girl just outside. Black taunts Red Robin about the chaos that just occurred in Chicago. Black seems to think that he has Tim trapped. He is mistaken as Red Robin crashes through the outside window and flies off with his wings. Black prevents the Elite from pursuing as he knows where Red Robin is headed.

Two days later Red Robin and Raven join the rest of the team, Bunker, Beast Boy, and Chimera. Red Robin is planning on entering the prison Raven saw in her vision at the end of the last issue but he is allowing the others a way out. The others do not even consider backing out after all as Chimera even says they are all Titans and friends, interesting as she has only been with the Titans for such a short time.

The next day, the Titans put their plan into action. Beast Boy sneaks into the control room to bug the cell doors so Red Robin can have control of what doors open and close. Elsewhere in the prison the others prepare for the next phase. First Red Robin has Raven, who is still very weak and helpless, tell him that the target is Despero. Unfortunately it will be only two against Despero as Bunker will have to stay behind to protect the weakened Raven leaving only Chimera and Red Robin to deal with Despero.

There is a problem; the bug that Beast Boy planted into the controls has allowed all the cell doors to open at once releasing all the super criminals in the facility. Back at Black’s apartment the Elite are getting alerts form the M.A.W., which Black already has predicted.

Red Robin’s plan for stealth is quickly destroyed when Blockbuster attacks the Titans believing that Tim put him in the M.A.W. Robin orders Bunker to not help him but protect Raven. Chimera orders Bunker to stay with Raven while she borrows his powers and helps free Robin from Blockbuster. Next the duo is face to face with Livewire. Chimera is able to channel her electrical powers and uses them against her and some other thugs in the vicinity. This allows Red Robin and Chimera to escape and continue with the plan to prove Superboy’s innocence.

Bunker has been able to use his psionic bricks to safely seal Raven and himself from the thugs outside but Bunker has lost contact with Chimera and Red Robin. Robin and Chimera hear something when the Guardian picks up something from the satellites. Raven also is able to sense something coming as well. Black meanwhile seems to know what is going on. All we see is a red streak crashing through the roof of the M.A.W. The guards in the control room of the M.A.W. are completely in the dark as well. Black orders the Elite to head for the M.A.W. We see Red Robin and Chimera with what looks like Despero in the shadows behind them. The last page, a splash page showing Superboy fully powered demanding his life back.

I still have the questions I had before. Mainly what is Kid Flash’s story and how he got out of the future. Was Superboy really responsible for the killings earlier? Will Wonder Girl return to the Titans fold? What is going on with Raven?

The other members of the Elite I really do not care much about.

This issue wasn’t perfect, as none of my questions have been answered, but the plot of the story has advanced. Overall and enjoyable read.