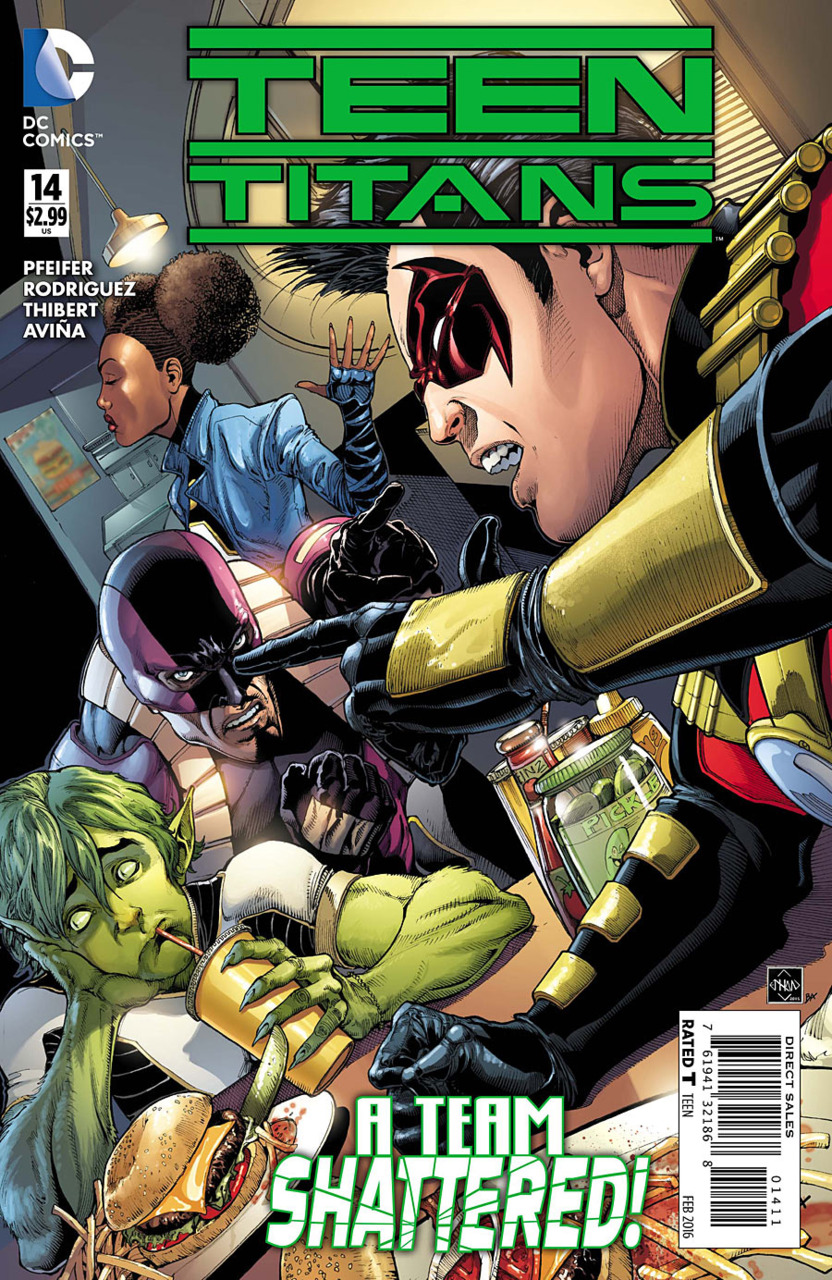 “Aftermath” opens with the Titans arriving at the Metropolis Armory Ward Dock, the gateway to the prison for the baddest of the bad. The Titans are in the custody of Alpha Centurion for their actions at the M.A.W. All the Titans are present: Red Robin, Wonder Girl, Power Girl, Kid Flash, Chimera, Raven, Beast Boy, and Bunker. Red Robin is having a pity party at the moment as he laments the possible fates of his teammates. A reporter questions Tim and Tim talks about what is right and that he does not care what others think. The crowd starts to throw trash at the Titans and they are loaded into the transport vehicles.

On the way, Tim is being held alone. He continues to lament this time about Kon and how he wishes he was there to help them get out. Just then Red Robin’s transport is attacked. At first he thinks it is Kon but instead it turns out to be Doomsday Jr. Side note, we get editors notes referring the reader to the Doomsday title. I have not been reading this title but I think we get a good breakdown on what is going on here. The creature has a crush on Cassie and it appears that Alpha Centurion has appeared in that book to fight the monster. He believes he has killed it so he has to “kill” it a second time. Wonder Girl does recognize the Doomsday monster and he is attacked by Centurion.

While this fight goes on, Tim frees the other titans and formulates a plan to get out of this mess. Chimera morphs into an Alpha Centurion to fight the real Centurion and Wonder Girl sucker punches Centurion. Alpha Centurion calls in his team the Pax Galactica. I have no idea who these guys are, they are just big and mean. The Titans feel they are over matched but Red Robin rallies his troops by directing the fight which allows the team to defeat the Pax Galactica leaving only Alpha Centurion. Red Robin asks Power Girl to grow like she did against Manchester Black and this time she can control it and she is able to take out Alpha Centurion. Raven teleports the Titans to the Robin’s Nest in Gotham as the press come in to cover the carnage of the battle.

Red Robin has Raven teleport him out as the Titans are not the only heroes being hunted by law enforcement. The Robins are as well.

Tim spies on a Robin takedown when he is joined by Jason Todd. This story will be continued in Robin War and Red Hood/Arsenal #7 where we will see Red Robin and Red Hood team up. The next issue of Teen Titans will be a battle with Professor Pyg.

This issue was just a fight issue. The fight itself was good as Tim was able to direct his team in the fight as the tactician everyone says he is. The issue I have is his lamenting in the beginning of the issue. He basically wines from the opening page to when Doomsday attacks. It is not until he frees Bart that he starts to act like Red Robin.

It was jarring to see Doomsday. As I am not reading that book, I had no idea that Cassie appeared there and again it creates a continuity question as to when this happened as she was with the Elite and Manchester Black up to this point. Some readers may not care but I am a bit of a continuity geek myself and I like things to fit as much as possible.

The set up for the Robin War does feel like the past as with the Night of Owls and Death of the Family crossovers. The difference is that for the most part the arc has completed and we are entering a new arc but this does feel like a break in this story to tell another.