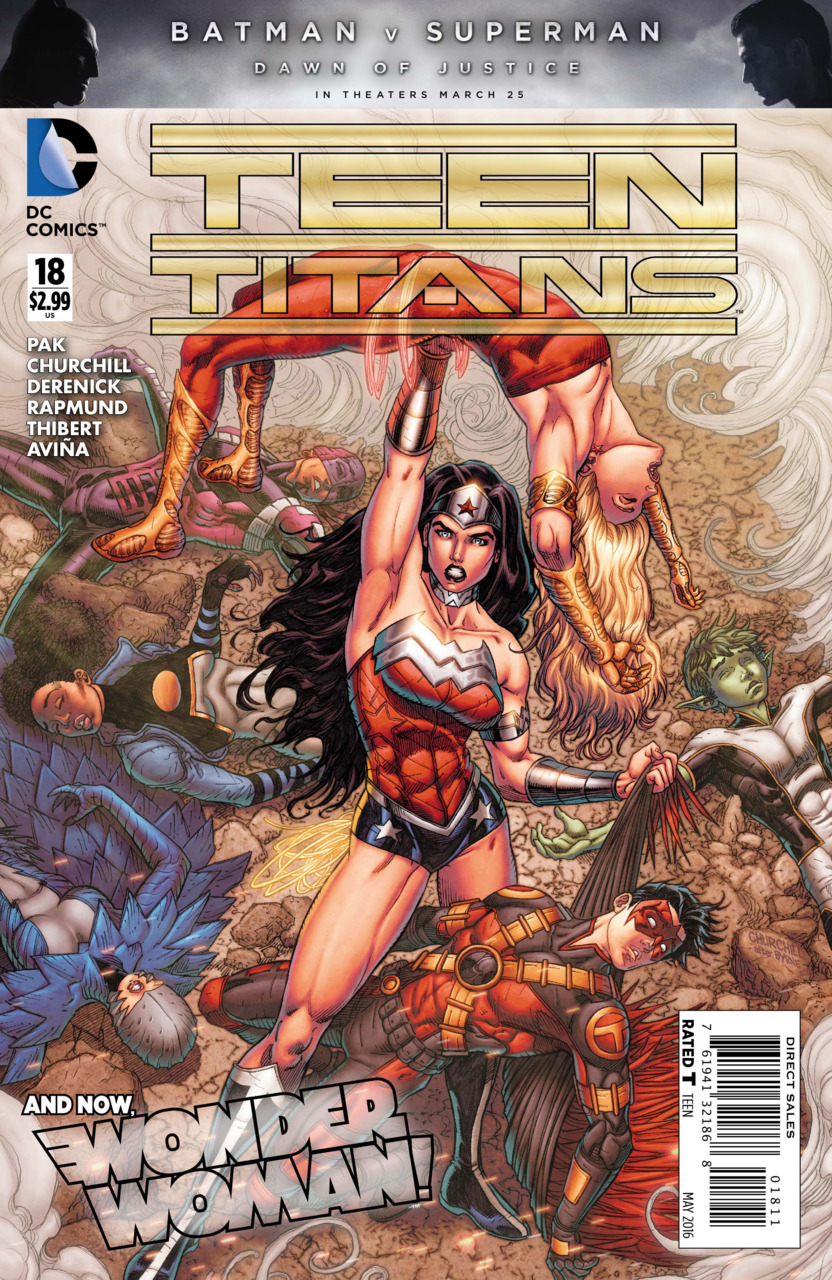 “Who is Wonder Girl? Part 2” opens with a less angry Wonder Woman with Red Robin. Diana is questioning Tim about what happened at her apartment and she is using her magic lasso for help. Tim is infatuated with the Amazon and tells her what happened in the previous issue including the demigoddess Cassandra. Diana knows about her and Cassie’s father in fact she says that Cassandra killed Cassie’s father where she says that she is now trying to help him.

In Southern Greece, we catch up with the other Titans. Cassie is holding the petrified head of her father while the others are engaging Cassandra and her hyenas. Bunker immobilizes them in his bricks and the exposition dump of the issue starts. Cassandra says that Lennox, Cassie’s father was trying to help her because she was born with the power to control mortals with her voice.

We cut back to the Batwing. Red Robin and Diana are on their way to Southern Greece. Tim picked up a signal from Bunker’s locator chip. Diana says that Cassandra is able to control everyone except herself. In fact, she was able to command forty people to kill each other. As a result, Lennox tore out her throat.

Back with Cassandra, she says that her throat was replaced with mechanics but she lost her power to control people. Cassandra admits that that did not change her because as she puts it she was a little insane. She spent decades planning and scheming.

Back with Red Robin, Diana picks up the story. She recounts that she found First Born, the first born child of Zeus. Together the two killed Apollo and Hades along with a hundred Amazons.

Cassandra with the other Titans picks up The story. She recounts that First Born then killed Lennox and that he was her brother. Demigods have the minds of humans but the powers of gods. When Hades was killed, the boundary between life and death was weakened so to find a better way, she wants to take advantage of that to bring Lennox back.

The other Titans step in and say that she cannot trust Cassandra. Beast Boy says that it does not matter where someone comes from, they can help Cassie find her way. Something hits the craft they are riding in and Cassandra breaks out of the bricks. Cassandra wants the Rod of Asclepius, the God of Medicine. The Titans and Cassandra are now over the Temple of Apollo in Delphi Greece and they find the place and the tourists there being attacked by giant serpents. Cassandra jumps off with Cassie and leaves the Titans to deal with the serpents.

The serpents turn their attention on Cassie. She changes into a super armor and rips the snake apart. Cassandra asks Cassie why she is holding back. Cassie is afraid of losing control and she leaps to help the other Titans. Cassandra shouts that Cassie is a goddess and she needs to trust herself. Cassie makes short work of the other snakes, but during the battle, debris starts to fall on the civilians. Suddenly that debris is atomized by the power of Wonder Woman.

Wonder Woman and Wonder Girl meet for the first time. Red Robin admits that he gave Cassie the name Wonder Girl. Diana soon turns her attention on Cassandra and attacks her. In the battle Cassandra reaches for the Rod of Asclepius and falls in the process. Diana catches her with her magic lasso and orders Cassandra to tell the truth. Cassandra still in the lasso says that she was speaking the truth, she just came to bring Lennox back. Diana agrees that Cassandra is telling the truth. Cassandra when freed asks Diana to help her save their brother Lennox. Cassie and Tim are both shocked. It seems that Cassie is Wonder Woman’s niece. Next issue the Titans take on the Gods.

This was an information issue. We catch back up with Cassandra and First Born and their story as was told in the pages of the Wonder Woman title. I kind of liked the fact that the two conversations meshed together very well to be a single narrative. That was good writing. The action beat was mainly the fight with the snakes which I basically have seen before so I was not wowed by the action in this issue.

I liked the information on Wonder Girl and how she fits in to Wonder Woman’s universe but other that that it was a so so issue.

I enjoyed the info but the action had a lot to be desired.