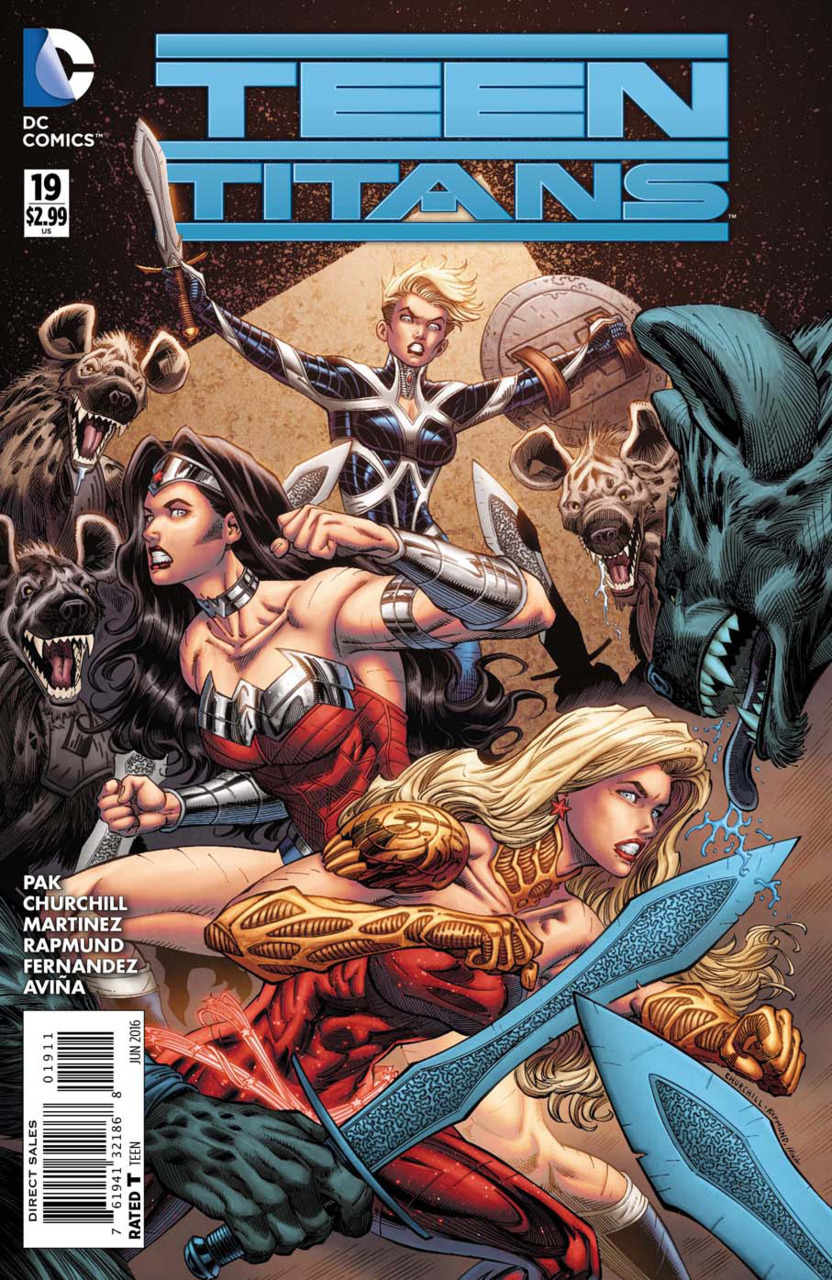 “Who is Wonder Girl Part 3” opens where the previous issue ended with Cassie discovering that she is the niece of Wonder Woman. Cassandra steps in to say that now that they are all family she can help Cassie, Diana is not so sure. The Titans look on in wonder and Bunker says that he is starting to feel like a fifth wheel. Cassandra insists that the Titans are there to help retrieve the Rod of Asclepius and then resurrect Cassie’s father Lennox. Cassandra picks up Lennox’s head and Diana steps in. She does not believe that going after the rod is a good idea. Apollo hid the rod for a reason and there is always a price to be paid when the someone steals the power of a god. Diana takes Lennox’s head and gives it to Cassie before jumping into the cavern to retrieve the rod to return to Apollo. Cassandra jumps after Diana and engages her in combat. Both demigods call to Cassie to retrieve the rod herself for very different reasons.

Still holding Lennox’s head, Cassie jumps into the cavern. As a consequence of the battle above, she drops the head and the other Titans jump in. Beast Boy, as an owl, retrieves the head and Cassie spots the rod but it is out of reach. Raven plants the rod and Bunker with his psionic bricks diverts the rod to Red Robin’s hands. He gives the rod to Cassie. The Titans now discuss what to do with the rod. Raven presses that the rod should be returned to Diana citing the price that Wonder Woman mentioned earlier. Bunker has some reservations and Tanya and Tim both scoff at the idea of magic. Tim does suggest that Cassie use the rod to resurrect Lennox and Gar steps in saying that it is Cassie’s decision. In the middle of the discussion Raven notices that the rod was damaged in the fall and the decision has to be make soon or the power will be depleted.

Cassie just says that she does not know how to use the rod and Cassandra steps in to suggest she take the rod. Despite Tim’s objection, Cassie hands the rod to Cassandra just when Wonder Woman takes out Cassandra’s last hyena. Cassandra heals her own throat restoring her command powers. Red Robin orders the Titans to attack but all including Cassie and Diana are frozen by Cassandra’s power. It is revealed that she did not trick the lasso, instead she lied to herself. She made herself believe that her only motive was to restore Lennox when in reality it was to restore herself.

Cassandra prepares to order the Titans to die. Tim tells Bunker to cover their ears with his bricks after she frees them from her first command and before she commands them to die. She can only issue one command at a time. By covering their ears with Bunker’s bricks no one is able to hear Cassandra’s command to die and Cassie powers up her silent armor and rips out Cassandra’s throat again, silencing her. Now Cassie has the chance to bring Lennox back but instead she heals Cassandra’s throat but does not restore her voice. Diana tells Cassie that she did the right thing. Red Robin hacks into Cassandra’s floating fortress and Diana takes Cassandra away. She suggest that Cassie join her and she will help Cassie figure out who she is. Cassie decides to remain with the Titans. Diana tells her she did the right thing again but she will always be there for her. We close with what I think is Cassandra’s voice in Cassie’s head telling her what she can become, therefore planting a seed that will grow.

We actually saw very little of the fight between Cassandra and Diana and that too was predictable when this is the Titans’ book.

Overall the issue was okay as I did not feel like I wasted my time reading this issue. But it just did not wow me like I would have liked.