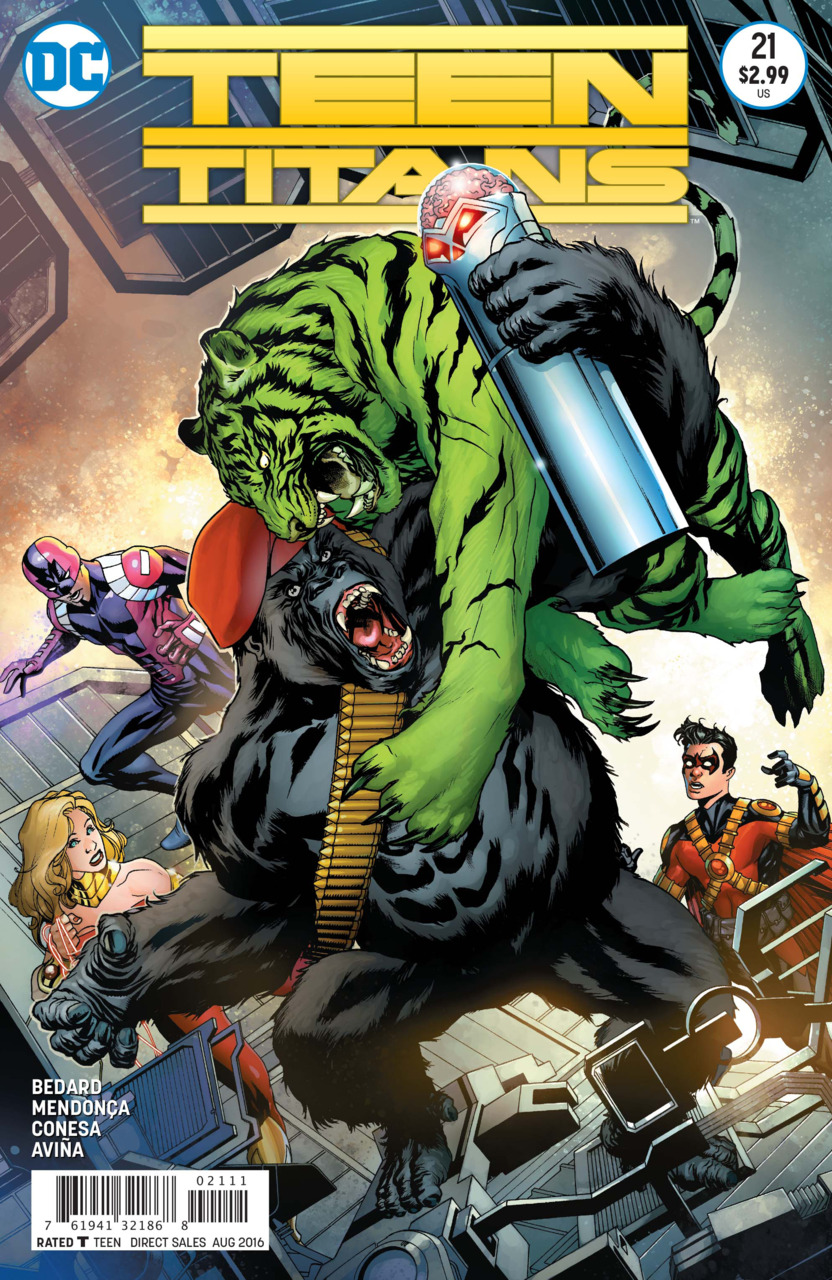 “Midtown in the Garden of Good and Evil” opens with a quick reintroduction of the characters in the last scene of the previous issue and what is currently happening and sometimes why. Metatroll93 and Wonder Girl’s current condition of being Brain’s puppets with what is called the Cortical Grapnel. Wonder Girl’s sudden attack on Red Robin and Monsieur Mallah.

Wonder girl crashes into Red Robin as he pleads for her to stop. We find that for some reason Metatroll’s apartment is next to the Central Park Zoo as Wonder Girl crashes out of the apartment with Red Robin and flies over the zoo. Red Robin is able to dunk Cassie into the sea lion pool momentarily giving him a quick break. Red Robin is able to give tactical commands to his team. He orders Bunker and Beast Boy to his position and Raven and Power Girl are to get Metratroll out of his apartment. Mallah laments that the two landed in the zoo and being an ape, he hates the zoo. Brain meanwhile is only concerned with his experiment. Raven and Power Girl materialize in the apartment and Brain orders Mallah to evacuate. Raven is able determine that Metatroll’s mind is as she puts it: “an empty tomb.” With that explanation, Brain is able to determine that Raven is telepathic and commands Metatroll to attack her. Raven sees the device on Metratroll’s head and she plucks it off releasing him. Brain finds that Raven was able to read him to determine that removing the device would not kill the victim and he powers up his psionic shields and blasts off out of the apartment.

Wonder Girl emerges from the water to face Red Robin again and she looks very angry. She launches after Red Robin and is immediately knocked down with Bunker’s psionic bricks and Beast Boy removes the grapnel from her head freeing her. Red Robin gives the two a tactical update on the hostiles and the situation while he checks on Cassie. Brain flies overhead, he recounts Metatroll’s claim that the Teen Titans and him are villains. He scoffs at the label and drops thousands of cortical grapnels down, he wants to test the moral compass of the Teen Titans and see how they balance self defense and compassion. He wants to see if the team are heroes, villains, or just human.

Back in Metatroll’s apartment Raven and Power Girl are talking to Metatroll. Tanya chastises Metratroll and he just responds by saying that she is lecturing him and that the villains are public figures and he is just providing parody. The Titans on the other hand broke into a federal prison. Tanya reminds him that they saved his life and she and Raven head out to join the others. Metatroll then has a sudden change of heart and asks to come along.

Outside the sea lions under Brain’s control starts to attack the Titans. They work to stop them while not harming the animals. Other animals start to attack. Red Robin declares that the fight really needs to be with the Brain. Mallah meanwhile is at the front gate and is faced with the panicked patrons running from the rampaging animals. The grapnels land on them and they too become puppets and with Mallah renter the zoo to fight the Titans.

Raven and Power Girl arrive and start removing the grapnels from the animals and people. Red Robin gathers the team and gives the battle cry Titans Together. Wonder Girl takes off after Brain and he zaps Red Robin in the back. Mysteriously Red Robin loses his mask.

Cassie grabs the Brain and threatens to kill him making Brain believe that she is just like him. Mallah opens fire on Cassie and she drops the Brain and Mallah is able to catch him. Brain’s experiment was to prove that hero and villain are empty terms, the only terms that matter are strong and weak. Mallah calls the Titans strong and heroes because they bring out the best in each other. Red Robin now with his mask again tells Raven to teleport the two to her home dimension before they cause any more problems. The Titans split up to secure all the free animals and free anyone else with the the grapnels. Metatroll videos the team in action. When everything is secured, the team discover that Red Robin is missing.

We now move to Belle Reve Supermax Penitentiary. Red Robin is being interrogated by a mystery woman who is soon revealed to be Amanda Waller. She is actually not questioning Red Robin but instead is conducting a job interview for him. My guess is she wants him to join the Suicide Squad. Next issue: Assault on Belle Reve.

Overall this was a good issue. There was definitely action and again Red Robin was proving to be a great leader. There were some comedy beats here as well, mainly with Mallah and his strange relationship with Brain as well as Mallah’s hatred of zoos.

The art in places was a little wonky. Some of the panels gave face shots of the characters that at times were off. For example the panel showing Red Robin giving his commands after dunking Cassie in the pool shows Red Robin with what could be considered lipstick on his lips. I already mentioned the panel that shows Red Robin not wearing his mask and the next time we see him, the mask is back on.

I also want to mention the convenience that this is suddenly occurring in the Central Park Zoo even when I saw no evidence of that in the previous issue. I believe that Metatroll’s change of heart was a little too abrupt as well.

With all of that said, this series appears to be closing on a positive note.