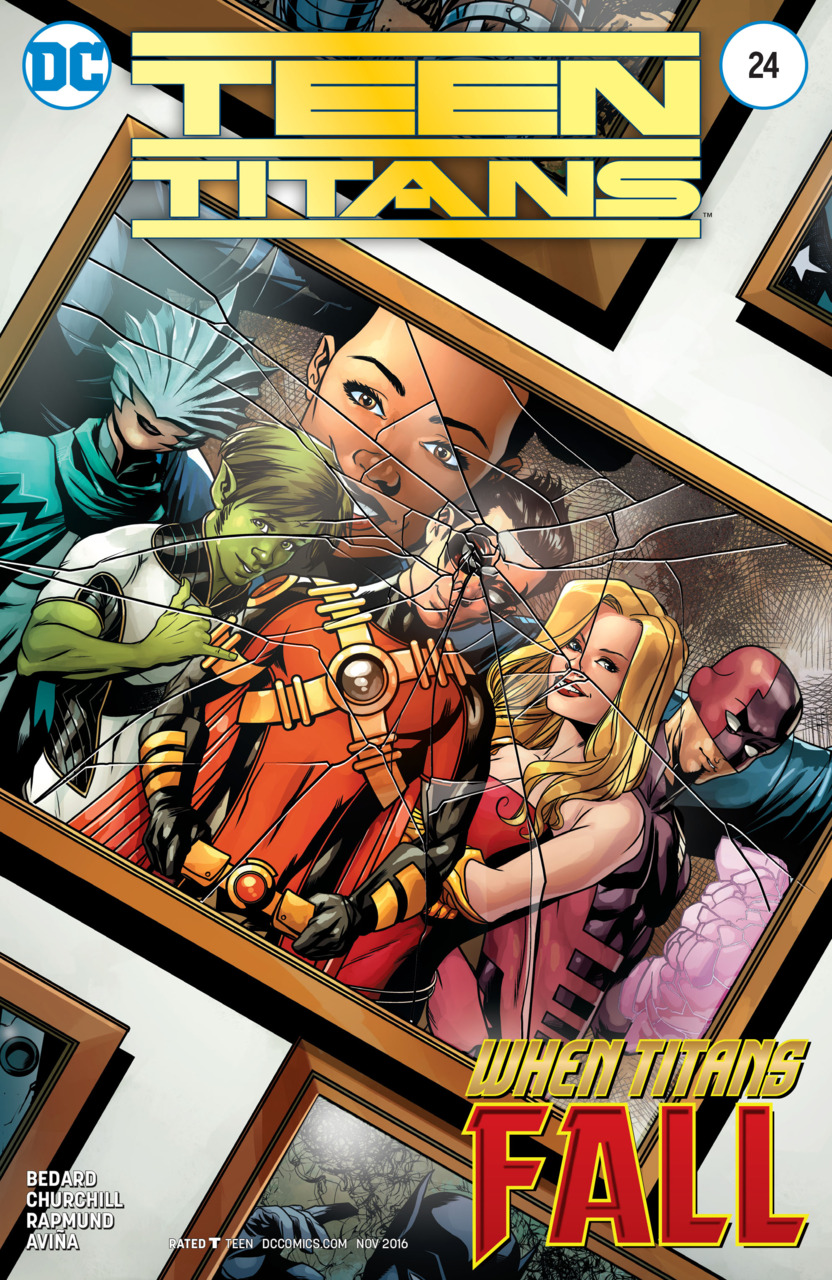 “Red Robin Remembrance” takes place after the events of Detective Comics #940, the believed death of Tim Drake. It may also be connected to the disappearance of Tim Drake at the end of Batman Beyond #16.

The issue opens with a flashback to the time when the Titans headquarters was a yacht in New York. Gar and Miguel are goofing off and disturbing a relaxing Cassie by inadvertently splashing her. Red Robin in costume shows up and asks Miguel to talk to him privately. A little later Red Robin tells Miguel that he has an alumni event at his old high school. He wants to make a good impression and he does not know how not to look like a dork. He asks Miguel for help. Miguel appears to be annoyed by saying that Tim thinks that just because he is gay, then he must have some sort of magical style sense. Tim starts to stammer saying that that is not the reason for his asking Miguel. Miguel slaps Tim on the shoulder just saying messing with him after all he knew that if he didn’t ask him, the only other person to ask would be Gar.

We switch scenes with Tim and Miguel at Boutique Vida Loca to go shopping. We see Tim trying on some outlandish outfits and after the third time Tim puts his hand on Miguel’s shoulder and asks him if he is still messing with him. Miguel is busted. After the shopping trip the two stumble across a gay pride parade and Tim and Miguel join in on the celebration. Miguel says that he felt like a prince by just being near him.

The scene turns to the present, we see the Titans gather together after Tim’s funeral. All the Titans look devastated. It is Tonya’s turn to share a memory to bring the mood back to celebrating Tim’s life.

She recounts the time after S.T.A.R. Labs blew up on Governor’s Island. She and Red Robin were examining the debris to secure any experimental tech that may have survived the blast. She did not know Tim well at all, but out of the blue he tells a really bad joke. She chides Tim saying that she thought he was the serious type. Tim just continues to joke with her and compliments her at the same time and we see an amused look on her face. Tim continues to converse saying that he used to mod the equipment in the Batcave but the gear they are looking at now is some cutting edge stuff. Tanya recounts that she started to whine about carrying on the legacy of Karen Starr, the original Power Girl. She was complaining that she always feels like she is still in her shadow. She then remembered that she was talking to a former partner of the Batman. But he made it on his own merits. He provided her the example to be Power Girl her way.

Raven shares her story of Tim Drake. It was shortly after she joined the Titans after the Titans rescued her from Trigon. She basically moping on her bed when Tim looks in saying that he thinks she should not be alone. Raven tells Tim that he should honor her wishes because he cannot possibly understand what she is going through. Tim just says try him. In response, she teleports then both to Azarath. She declares that she was supposed to be the instrument of the destruction of humanity. How can he ever trust her. Tim just listens and tells her to get it out of her system, he is not going anywhere. Tim goes on to teach her what friendship means. The two return to the normal dimension and Tim says that he does not know what it must be like to be Trigon’s daughter, but he does know about scary father figures and kids with dark destinies. Tim recounts the story of Damian Wayne. He could not understand that Bruce saw a spark of good in him until he saw the spark in Raven. At that moment, nothing meant more to her than the approval of Tim Drake.

Gar recounts the other Robins. He says that Tim was the best. He got the best about being Batman’s sidekick and still got out with his soul intact. He did push hard and nobody wanted him to be their enemy, but Tim was the one you wanted to be stuck on a desert island with.

Cassie can’t stop looking at his pictures, but she cannot stand it. Gar encourages her to concentrate on the good stuff and she starts her story. The time was when the Titans were passing through East Kentucky going grocery shopping. This was the first time they had any downtime. She asks Tim why he never tried to kiss her again after that night on the yacht. Tim says that she and Superboy were an item and he kissed her in the first place because Trigon was messing with their heads and they were all acting a bit off. Cassie asks Tim if he is himself now, probably as a ploy to kiss him again. Suddenly the two hear an explosion and take off as Red Robin and Wonder Girl. The two arrive at the site of the explosion and fortunately there were not any cops their yet. The firefighters are leary of the two at first until they see that Tim can see the victim is still trapped. The two take off to rescue the trapped people. Cassie was drawn to Superboy because he was tortured, tragic, and a little dangerous. Tim was something else. Working with him was like poetry and a dance. He could get you to take risks and do more that you thought was possible. He made her better. The two were able to save everyone, and it reminded Cassie why they do what they do. Now she knows why Tim never kissed her again, because of his relationship with Stephanie Brown.

The attempt to keep things upbeat seems to be failing as Tonya starts to cry. Raven broaches the topic of the future. Do the Titans move on together or is this the end of the Teen Titans? Miguel says that they should stick together to be with friends. Gar puts his hand on Miguel’s hand saying that a team needs a better reason than a friendship to stay together. Tim was the reason for the existence of the Teen Titans. Tanya says that they should honor Tim Drake by helping other metas and Raven says that none of them have Tim’s wisdom. She will have a hard time to keep herself on an even keel much less intervene in the lives of others. Cassie just cannot keep doing this for now. It is not the Teen Titans without a Robin in charge.

Raven teleports to her family in San Francisco to reconnect with them, a lead in to the new Raven series. Gar and Miguel head off to Los Angeles. Gar wants to find an agent and continue his acting career. Miguel is not sure where he will go after taking Gar to the airport. This leaves only Tonya and Cassie and neither knows what to do and Tanya turns off the lights. She proposes that the two stay together but not as “Titans”, it just is not the Teen Titans without a Robin in charge.

The final panel is a shot of Damian in his Robin costume looking at the Teen Titans uniform of Red Robin. The lead in to the new Teen Titans title.

I loved this issue. There was not a lot of action, but there was some with the explosion rescue. What I loved about this issue was the continued character beats.

We see how Tim affected each of his team mates in very positive ways. Tim acceptance of Miguel’s sexual identity, his love for his friends, his example to the others, his leadership skills, and his way of making you better than you were. All these are the qualities of Tim Drake that I love and again had failed to see time and time again until these last few issues. I would love to see a Teen Titans run with this Tim Drake at the helm, but unfortunately that does not seem possible now that Damian is set to take command. The fans will have to wait and see where that run goes but for this issue I give it a perfect rating.