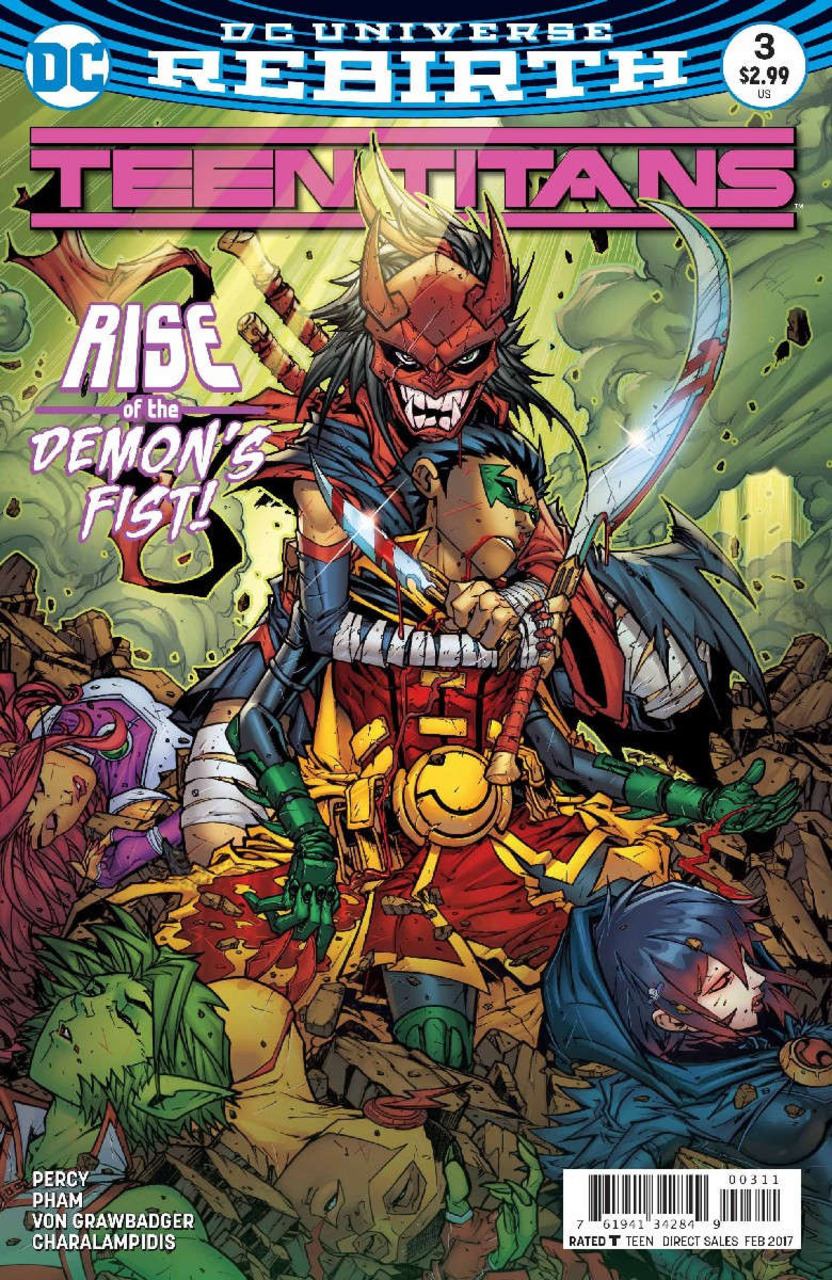 As the third issue opens in the past, Damian can be seen sword fighting against cousin Mara. Training under the tutelage of Ra’s Al Ghul in the Black Citadel on Infinity Island, the two young Al Ghul grandchildren spar against one another as Damian berates Mara for wishing to challenge his leadership of the Fist of the Demon. He also notes that Mara isn’t worthy of leadership since her father Dusan was banished from the League of Assassins. As The Demon’s Head enters, young Damian kneels before his grandfather as Mara hurls a dagger at her cousin. Catching the blade, Damian whips the dagger back at Mara…hitting and scarring her face and right eye.

Back in the present, the Teen Titans are busy fleeing from the battle seen in the previous issue as the team talks of the power that the Demon’s Fist wielded against them. After discussing how Damian stole a batplane from Batman, Robin pulls Kid Flash aside in order to remove a tracking device that The Fist had placed on him.

Landing in a forest, the Titans regroup around a campfire as they prepare to stop the Demon’s Fist from coming after them…however, Damian states that The Fist is their problem and they need not involve the likes of Batman, Nightwing or any other hero. With the looming knowledge that Damian is still hiding information from them, Raven constructs a campfire and says that they all need to come into the light…figuratively speaking in regards to the truth.

Opening with a quote from a Robert Browning poem, Damian begins to speak but is quickly cut off when Kid Flash is surprised that he was into poetry. As Robin begins to tell his story, he reveals his family history of Ra’s Al Ghul, Mara and the League of Assassins and states that he has “bad blood.” When Starfire counters that he simply could have told them all this in the beginning (rather than kidnapping them), Damian notes that it is better to ask forgiveness than permission…and that he is still trying to figure out how to be “good.” The Titans then come together to tell some of their dark history – Starfire notes how she isn’t like her sister Blackfire who enslaved and tortured her; Raven is the daughter of a demon lord known as Trigon; Kid Flash, like Raven, is the son of Daniel West aka The Reverse Flash; Beast Boy has lost his entire family and he notes that he uses his humor to cover up the pain.

As the team begins to bond over their mutual dark pasts, Damian sneaks off into the forest and summons Goliath. The two fly off into the night. Back at the Birdcave, Mara and the rest of the Demon’s Fist emerge from the collapsed cave. Mara is furious at Damian and the others escape and yells at the others to follow her orders. Cutting back to the woods, Beast Boy takes a quick bathroom break and notices Goliath flying off with Robin.

As the issue draws to a close, Goliath arrives at Infinity Island and Damian dismounts and tells his friend to leave. Approaching a waiting man, Robin drops to his knees and tells Ra’s that if he spares the Teen Titans…he is his.

Damian has always been one of my favorite characters…and (controversially) my favorite Robin. However, he has one flaw that I feel gets played too often – good vs. evil. In the past few years, Damian Wayne has struggled with his heritage, being to the son of Batman and the grandson of Ra’s Al Ghul. A child with deep seeded lineage in both good and evil. Beginning with his appearance in Grant Morrison’s “Batman & Son,” Damian has often been a thorn in everyone’s side and crossed the line a few times (see The Spook and Nobody). Leading into the finale of “Batman Inc,” Damian had seemed to come to grips with his heroism and even ran headlong into a fight that he knew he may lose…battling against the Heretic, the young Boy Wonder lost his life. Flash forward one year (or so) in real time, and Batman succeeds in resurrecting his dead son via some magic, Darkseid and a rock. Once again, Damian leaves on a quest to right his wrongs and begins to atone for his actions taken during his training in Patrick Gleason’s “Year of Blood” storyline. Coming to grips on being the Son of Batman, we now see Damian sacrificing himself (again) and bringing himself to his grandfather.

Can anyone say one step forward, two steps back? Do we really need to do this again? Damian struggling with his morally bad family? I guess so…and even though I still love his character, I wish that we could move past this.

Moving on, this book was still pretty decent, I like that Percy ties all his Titans together with their dark pasts and histories. Starfire, Raven, Kid Flash, Beast Boy and Robin all share a common dark secret…and it all gets put on the table in this issue. I hope that we get to explore these other histories once we finish with this Damian-centric story arc.

I found it interesting how Damian quotes a Robert Browning poem when beginning to talk about his connection to Ra’s Al Ghul, and it isn’t until the end of the issue that Damian reflects again on the poem (entitled “Childe Roland to the Dark Tower Came”) and notes how he doesn’t know how to interpret the ending when the character arrives at this haunting, nightmarish tower…does it represent success or damnation? I can see the parallel that Percy is making to Damian, in that he is grappling with his “bad blood,” but (again) I though Damian had come to terms with this and declared himself the “Son of Batman.”

This issue also showcases the new artist for the book, Khoi Pham, and I have to say that I am liking how this book looks! Although I did appreciate Jonboy Meyers work on the first two issues, Pham seems to get how these characters look and feel. Also really liking the variant covers for this book done by Chris Burnham.

Overall a decent issue…still looking forward to this series as it comes, but I hope that we can get away from Damian grappling with his heritage…again.