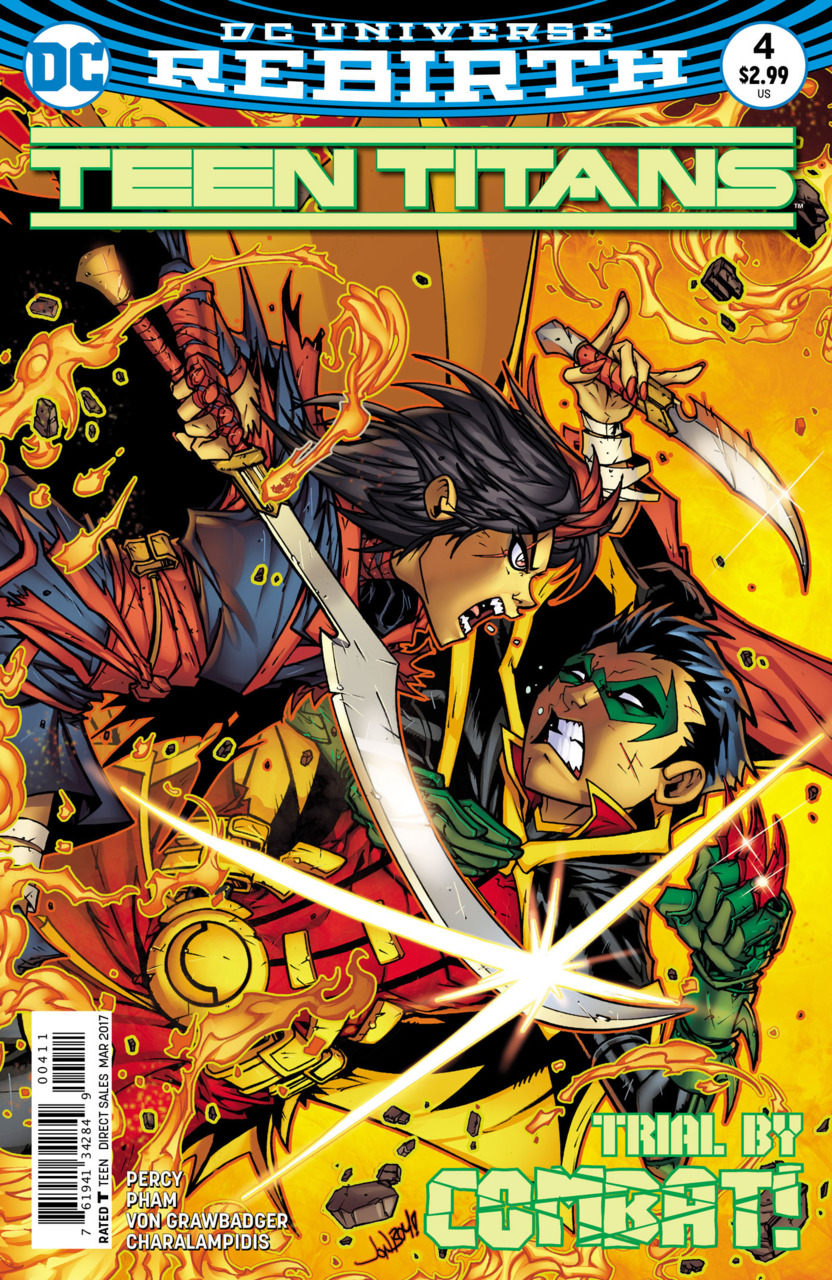 Picking up from the end of last issue, Damian is kneeling before his grandfather Ra’s Al Ghul as he pleads for the Demon’s Head to call off the Demon’s Fist from their attacks upon the Teen Titans. Lifting Damian off the ground by his throat, Ra’s holds the Boy Wonder in the air as he berates him over crawling back to him and mewling to him. Not easily forgiven, Ra’s drags Damian inside as we see a green fly land on a nearby rock. Growing back to normal size, Beast Boy is confused by the scene he just witnessed. Back inside the citadel, Ra’s continues to drag Damian through several rooms as he monologues about Damian’s upbringing in the Black Citadel – how he enhanced his mind, knowledge and physical prowess to become the heir of the Demon.

Taking him into the Chamber of Prophecies, Ra’s brings his grandson before the Mirror of Truth and he asks the boy what he sees. Commenting that he knows what he can see (Damian becoming the Ra’s Al Ghul), Damian stays quiet as he looks at the mirror and sees Batman standing before him. Asking Ra’s to call off the Demon’s Fist, Damian turns to see Mara and the Fist entering the room and the two cousins trade words and a trial by combat is issued. If Robin wins, the hunt for the Teen Titans is ended…and if Mara wins, then Damian will be dead.

Cutting away, the Batplane now turned into a submarine is streaking its way underwater as it follows dolphin Beast Boy towards Infinity Island and the captive Robin. Emerging inside, Beast Boy discusses the events that he saw with Kid Flash, Raven and Starfire and they come to the conclusion that Damian must have been extremely vulnerable with the rest of the team talking about their dark backstories. Starfire even equates the Boy Wonder to a poisonous mushroom delicacy on her native Tamaran…covered in poisonous barbs and found upon a tall mountain, but prepare and cook it carefully it turns into delicious sustenance. Beast Boy has a bit of a leadership moment and talks about his guilt over not being able to help save Tim Drake when he died, and he doesn’t want to lose another Robin if he can help it.

Back on Infinity Island, Damian warms up quickly before being summoned into a cavern complete with a stone bridge spanning over top a pit of bubbling magma. As Mara and Damian battle with swords, it seems that the head of the Demon’s Fist is winning…but Damian sends his sword flying at a stalactite which falls into the lava spraying Mara in the face. Seemingly victorious, Robin suddenly crumples as Mara sends a dagger flying into his back…the same knife that Damian had used to scar Mara with.

On the shores of the island, the Teen Titans arrive and knockout a guard…meanwhile inside, the remainder of the Fist take the injured Robin and place him inside a locked cell to prepare for Mara’s initiation ceremony into the League of Assassins. The members of the Fist discuss how they would have been better off under Damian’s leadership as Mara has selfishly gained her initiation by foiling their own…and Damian was willing to die for his team while Mara would not have been. The issue ends with the Fist leaving Damian alone as he slowly bleeds out…however, the door to his cell suddenly blows inward and the Boy Wonder looks to see the Teen Titans standing before him.

“Teen Titans” is slowly becoming one of my favorite books month in and month out. Although last issue focused on same character plots and failed to deliver on an awesome battle between the Titans and the Fist, this issue returns to form with Damian showing his true colors and the Teen Titans showing up to rescue their captured friend.

There were a few nice moments in this issue…little character driven points that I really enjoyed. The first was when Ra’s puts Damian in front of the Mirror of Erised…I mean, the Mirror of Truth and the Boy Wonder is shown what he most truly desires. Ra’s sees Damian turned into himself, while Robin sees himself as an older Batman. Although we have seen an alternate Damian becoming Batman in the “666” universe, it’s nice to see that our current Son of Batman is eager (and maybe destined) to take up the mantle of the Cape and Cowl.

Another cool moment was in the minutes leading up to the fight against Mara. Damian is alone in a training room as he pretends to fight against his cousin and even commentates the fight…throwing in corny quips. Kind of like how Marty McFly pretends to draw his gun against Mad Dog Tannen in the mirror in “Back to the Future: Part III.”

Lastly, I enjoyed Beast Boy’s development in this issue…we got to see a rather personal moment for the shapeshifter when he opens up about how guilty he feels over the death and loss of his former friend and leader, Tim Drake. Being unable to help Red Robin in his final battle eats away at Beast Boy and he seems determined to ensure Damian doesn’t end up the same way. I also enjoyed Starfire’s comparison of Damian to a poisonous mushroom…immediately made me think of Shrek’s comment of how ogres are like onions.

Overall I really liked this issue, and I’m really digging Benjamin Percy’s work. I’m interested to see if Beast Boy plays a bit more of a leadership role in the team…although I love Damian, it would be nice to see him step up to the plate a little bit. The art is also very well done, and I liked the battle over the lava pit between Mara and Damian. Variant covers by Chris Burnham are truly awesome.