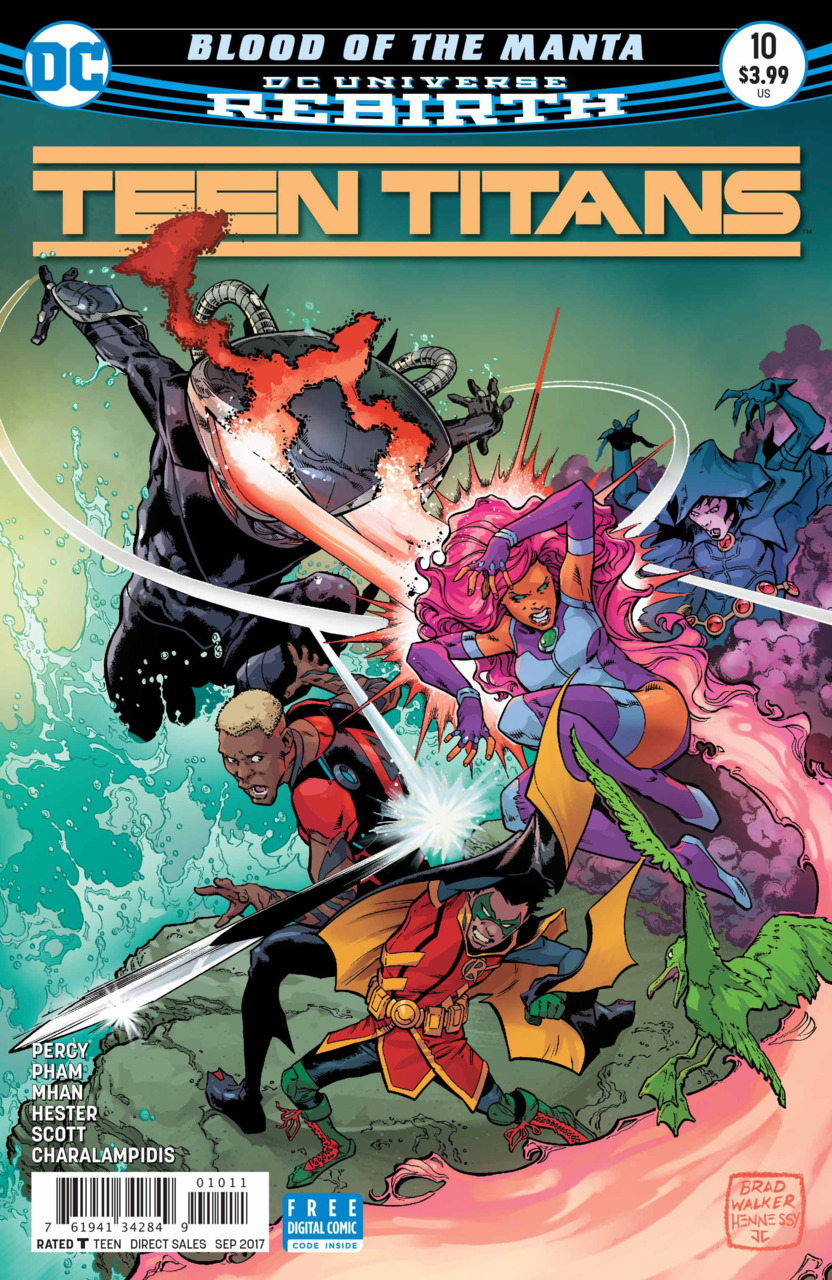 Overview: As the Teen Titans aide Jackson’s injured mother, Black Manta captures his son and sets a course for his true prize: a fabled black pearl that holds control over the ocean itself.

Synopsis (spoilers ahead): Beginning where we last left off, “Blood of the Manta” continues with a vicious battle between Black Manta and Lucia Hyde. Protecting herself with hydrokinesis, Manta unleashes a barrage of laser blasts from his eyes as he demands to know where his son is. Almost as if summoned, Jackson Hyde appears from nowhere wielding a pair of twin water swords and engages his father in combat. However, the action stalls briefly when Darth Vader tells Luke he’s his father…I mean, Black Manta tells Jackson he’s his dad. Lucia quickly explains that she was trying to protect her son from the villain and Jackson once again launches himself into battle. Easily knocked down, Manta tells Lucia he’ll be taking their son and sending her to hell…however, Jackson offers up his own life in exchange for his mother.

Back in Teen Titans Tower, Damian is talking to Batman via a computer screen and the Dark Knight lightly berates his son for the recent events of “Teen Titans”…including their recent battle with Deathstroke, Beast Boy and his vlog, and the incident when King Shark kidnaps a reporter. After signing off, Raven appears and talks to Robin about the recent firing of Kid Flash and how hard Damian is being on Jackson Hyde. Raven seems to push some of Damian’s buttons as the Boy Wonder finally loses his cool on her. However, the two are interrupted when a severely wounded Lucia Hyde bursts into the room.

Cutting over to Ferry Plaza Farmer’s Market, Beast Boy and Starfire are busy shopping, while the former complains about Damian’s leadership of the team. Garfield suggests that Starfire take over due to her maturity and prowess in battle. Almost proving his point, Robin suddenly contacts them and demands they return to the Tower.

Somewhere in the Pacific, a black manta-shaped submersible skims through the water and we see that Jackson is manacled to a chair as Black Manta pilots through the ocean. The two begin an argument, but Manta states that all of Jackson’s hatred towards him is irrelevant…all he wants is the sea shell necklace that he wears. Cutting it from his son’s neck, the shell suddenly shows a holographic projection of a map. Flashing back, Manta tells Jackson of a former pirate captain who wielded the power of a black pearl that could control the ocean itself…however, before her death the captain had hidden the pearl away, but perished before her secret could be told. Hinting that the captain had become trapped in Xebel, Manta tells Jackson he went in search of a guide to help him and inevitably found his mother Lucia.

With Lucia still unconscious in the med bay, the Titans work to wake her back up and figure out where Black Manta has taken Jackson. Finally managing to wake her, Lucia picks up the flashback story and tells how she was a former native of Xebel and discovered a human diver in search of something. The two fell in love and she eventually became pregnant with Jackson…however, the diver (Black Manta) betrayed her and utilized her knowledge to find the skeleton of the dead pirate captain. Lucia secretly swapped out the necklace for a fake and when Manta thought he had failed his quest, he left Lucia. Finishing the story, Robin and Beast Boy begin arguing over what to do, but Starfire quickly breaks them up and orders everyone to prepare for a rescue mission. Damian attempts to reassert control, but Starfire puts him firmly in his place.

Back with Manta and Jackson, the duo arrives at the location projected by the shell hologram. Black Manta cuts Jackson bonds and offers him escape if he wants, but notes that he won’t last long. The pair dive into the water and begin to swim towards their destination. Reaching the sunken treasure chest, the issue ends with Jackson being grabbed by a giant underwater octopus as Manta now has the choice of saving his son or claiming his prize.

Analysis: Well, it looks like Damian is getting the boot from Teen Titans leader as Starfire listens to Beast Boy’s suggestion about her being older, wiser, more powerful and nicer than any of the others. It always seemed a bit weird that the older character of Starfire would be taking orders from the younger Damian Wayne…however; I was never sure exactly what the age difference between the two is. It is stated in “DC Universe Rebirth” that Damian turns thirteen years old, but I truthfully have no idea how old Kory is supposed to be.

While this issue focuses more on the back story of Lucia and Black Manta, we learn that Lucia was once a former member of the Xebel colony that rests in the Bermuda Triangle. Doing a bit of research, I learned that Xebel was a penal colony of Atlantis where they sent people to be imprisoned…another famous inhabitant is Mera, Aquaman’s fiancee. At some point, Black Manta came looking for this corpse of the dead pirate captain and manipulated Lucia into helping him find it. This black pearl is stated to have control over the ocean itself, and I wonder if this is the source of power for most people of Xebel to have that same ability. Mera, Lucia and Jackson all wield the ability of hydrokinesis and can manipulate and control the water around them.

While the Titans are busy arguing, Manta and Jackson have a slight heart to heart that Manta all but ignores…he cares more for his prize than his own son. Of course, the issue ends with a decision that tests that limit – save his son, or escape with his prize. It will be interesting to see what Manta’s decision is in regards to that question.

Final Thoughts: Overall this was a great issue with a nice origin of how Manta and Lucia met, and delves the mystery deeper of the significance of Aqualad’s abilities and powers. As always, Percy and Pham make an excellent pair as they continue to put out one of my favorite series of the Rebirth line.