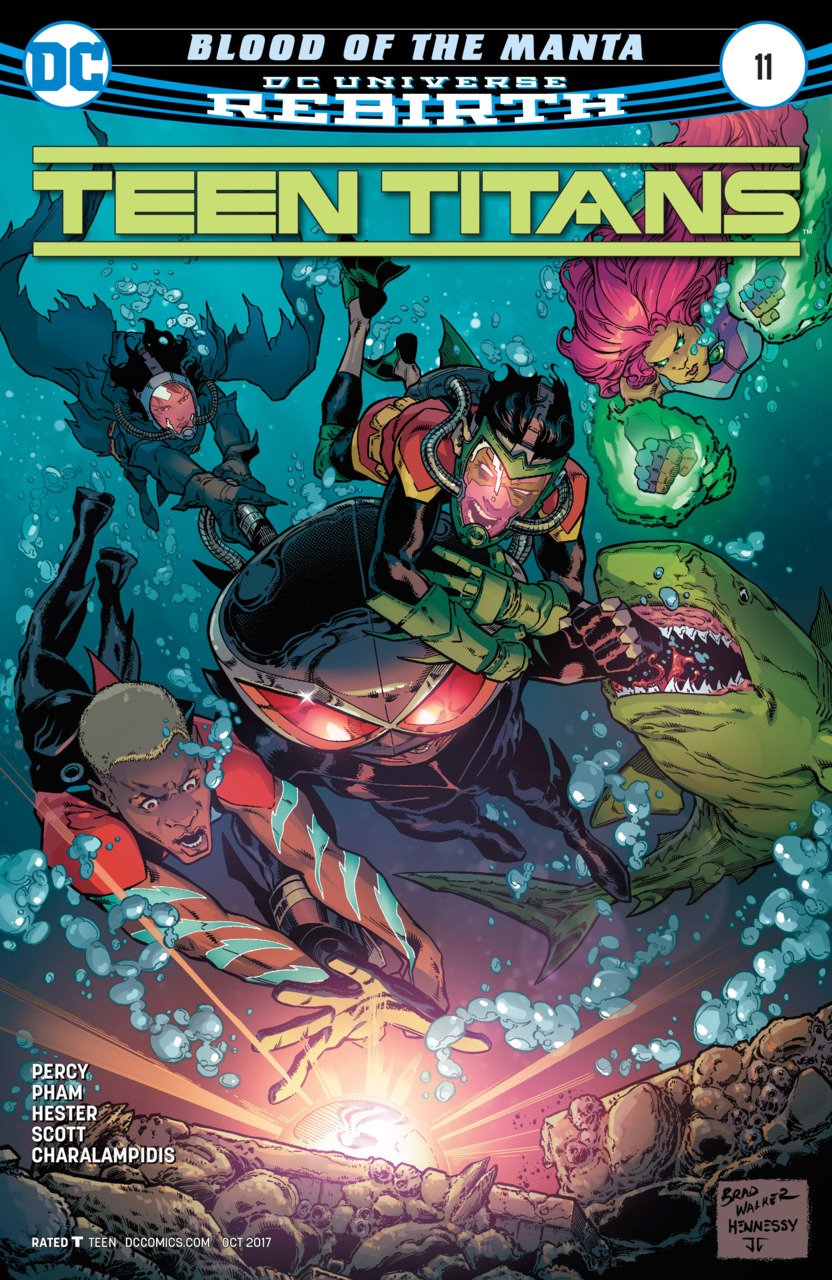 Overview: Jackson learns how to finally harness his powers and help the Teen Titans take down his father, Black Manta. After recovering the Black Pearl, Jackson is finally given the title of Aqualad.

Synopsis (spoilers ahead): This issue picks up with Jackson still trying to open up and connect with his father, Black Manta, while the latter searches for the Black Pearl. Although he shares a lot about himself, Jackson is told point blank by Manta that he does not care. Suddenly, an gigantic octopus guarding the Black Pearl grabs Jackson and begins to try and devour him. While Jackson tries to defend himself, Manta finds the stone, but a skull shaped cage closes before Manta can grab it. Just as he thinks his father has abandoned him, Jackson is rescued as Manta pierces one of the octopus’ eyes. With his father’s help, Jackson is able to take out the other eye by discovering a new level of his abilities.

Somewhere on the Indian Ocean, the rest of the Teen Titans attempt to locate Jackson based on his tracker. Conversations turn hostile quickly as personalities clash. Eventually, the arguing is halted by the arrival of Beast Boy (as a breaching humpback whale) who tells them that he has enlisted the help of the sea life below but with no results yet.

Back underwater, Jackson is still shocked by his display of power. Black Manta tells him that the ocean is his weapon and that, with his help, he could truly harness the depths of his abilities. Arriving back at the skull shaped vessel, Manta orders Jackson to open it as he is a true child of Xebel and, therefore, allowed to open it. After a brief scuffle, Manta maneuvers Jackson into touching the vessel and he is able to retrieve the Black Pearl stone.

Now imbued with its power, Black Manta easily puts down Jackson, but just before he can do any more harm to him, the rest of the Teen Titans arrive to lend a hand. Even fighting together, Manta’s control over the Black Pearl makes him almost unbeatable. With a little encouragement from Robin, Jackson is able to harness his power and unleash it upon Black Manta. The power overwhelms Manta and Jackson drives him deep underwater. There, he takes back the Pearl but does not capture his father. He tells him that he does not need his father since he already has a family in the Teen Titans.

Now that the battle is over, Jackson meets with Tempest to debrief on the event. Tempest bestows the title of Aqualad on to Jackson and tells him that he will hide the Black Pearl where no one will find it and without a map to it.

The issue concludes with some mysterious men watching Beast Boy and saying he will be perfect for their plan.

Analysis: This issue wrapped up this arc nicely and still left a little more to explore, potentially, down the road. Both the writing and the artwork lent themselves to delivering an action pack ending to this arc.

Regarding the artwork, I really liked how Jackson’s powers were displayed by penciled Khoi Pham and colorist Jim Charalampiois. You can get a true sense of the scope and potential his power levels have with how connected he can become to the ocean when using his powers.

One aspect of this conclusion that I was not happy about, admittedly, was the way Black Manta felt about his son. I admit that a lot of my experience with these characters and their relationship stems from the Young Justice series, but I found myself liking Black Manta off and on during that series. He was a very harsh and calculating man, but did love his son in his own way. That love never interfered with a mission but, deep down, he still cared for his son and only wanted him to join him in his criminal enterprise. I may have missed something in an earlier issue, but it seemed that this issue and the past one portrayed Black Manta as a power hungry criminal who only sought to exploit his son and his powers.

Final Thoughts: Overall, I really enjoyed the teaser for the next arc and I’m looking forward to what this creative team has in store for a Beast Boy centric arc.