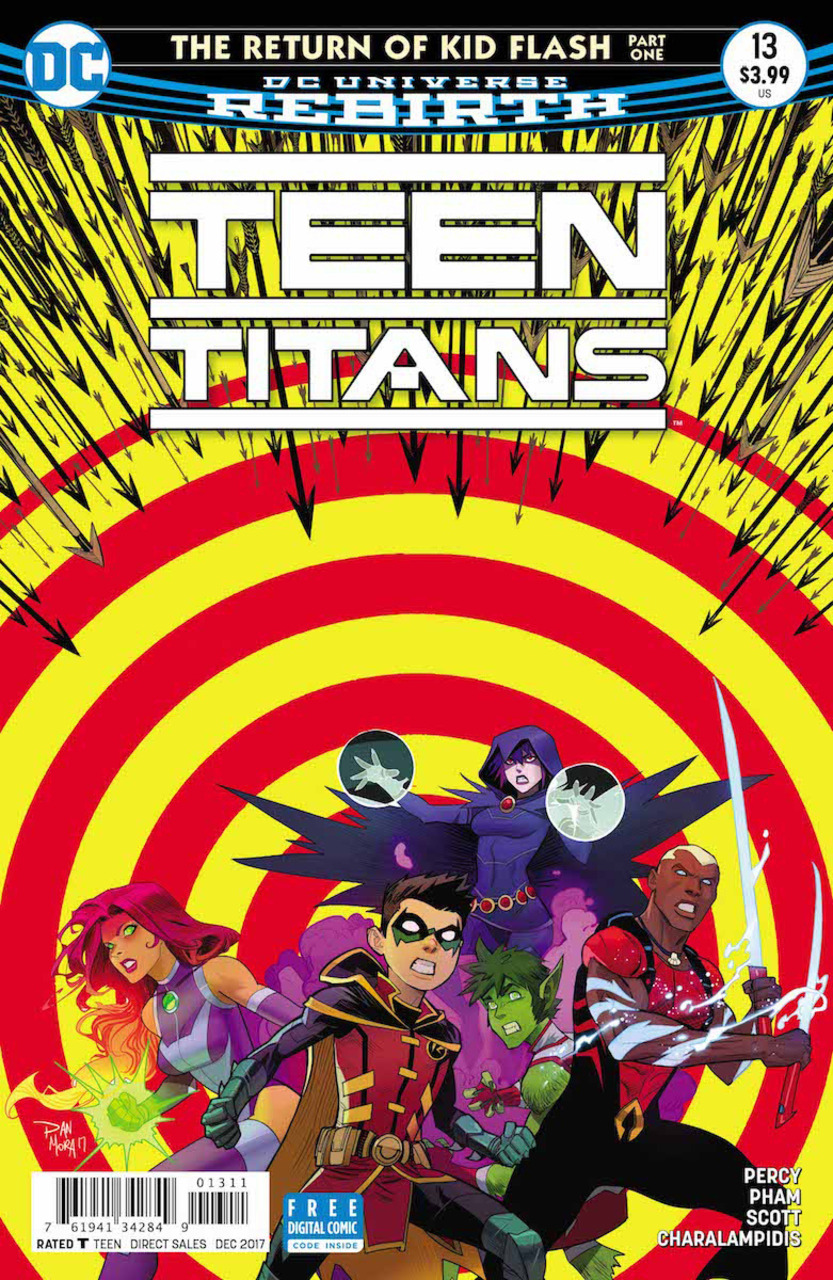 Overview: After having lost the leadership of the Teen Titans, Robin goes out to recruit a new member for the team. Meanwhile, the team tries to encourage Kid Flash to return to the team.

Synopsis (spoilers ahead): In the Teen Titans headquarters, Robin stands above the defeated bodies of the rest of his teammates saying that he wants to “start over”. It is revealed to have been a simulation which still disturbs the rest of the Teen Titans as they walk into the training room. Robin explains that he is trying to build a virtual team to help everyone continue training. Moving past this point, Starfire tells Damian that the team is wanting to reinstate Wally (AKA Kid Flash) as a member of the team. Damian still is unable to forgive him for joining Deathstroke. The rest of the team admits Wally made a mistake, but that is what being a teen is all about. Robin tells Starfire to start leading the team and with that attitude, to see how things turn out.

In Central City, we see Wally still helping out his city as Kid Flash, but is struggling in his personal life, specifically in school. During the attempted mugging of an old lady, Kid Flash arrives on the scene to capture the criminals. The Teen Titans show up to offer Wally a place back on the team. After numerous members make their cases, it is Raven who finally breaks through and gets Wally to agree to join the team again. His one condition, however, is that Damian apologizes to him.

Meanwhile in Star City, Robin observes Emiko Queen taking down a villain named Onomatopoeia. As she takes down the villain, Robin swoops in and saves her with Goliath’s help from an explosion. After landing a safe distance from harbor, Robin notes the similarities they share as non meta-humans. He then offers her a spot on the team which she flat out refuses as Damian appears to be a nightmare of a teammate. As she attempts to leave, she realizes that the van she had crashed to take down Onomatopoeia was part of his plan to create a tidal wave to destroy Star City.

Analysis: After last month’s poor crossover issue for Dark Nights Metal, this issue got back to what I had been wanting to read in a Teen Titans book. We get to see everyone deal with forgiveness and team work in very different ways and with varying degrees of maturity. Percy writes Damian so well and how he interacts with his “teammates”. Although he is very much the “Batman” on this team, he does not share the same maturity level as the Dark Knight which leads him into awkward situations and even letting his emotions cloud his judgment. Although he will always most likely be an arrogant kid, his character has real potential on this title to emerge a more mature, team oriented hero.

The artwork in this issue was on point and I felt that Pham really seems to capture everyone’s facial expressions and give you a sense of both their feelings as well as their maturity level. With a book focused on a group of teenage superheroes, there is bound to be drama and we certainly get a feel for that even beyond the great dialogue.

Final Thoughts: The ending I found very interesting because we have two major cliffhangers with very different stakes in each. On the one hand, we have a legitimate tidal wave about to destroy Star City, but in Central City we have Kid Flash throwing down an ultimatum for Damian to apologize for firing him from the team. Percy seems to understand that a dramatic moment does not necessarily have to be a big action piece but can be a small emotional one as in the case of Kid Flash’s ultimatum. Either way, I know I am very much looking forward to seeing how it turns out although I do have a feeling Damian will have to apologize fast in order to get Kid Flash’s help to stop the tidal wave.