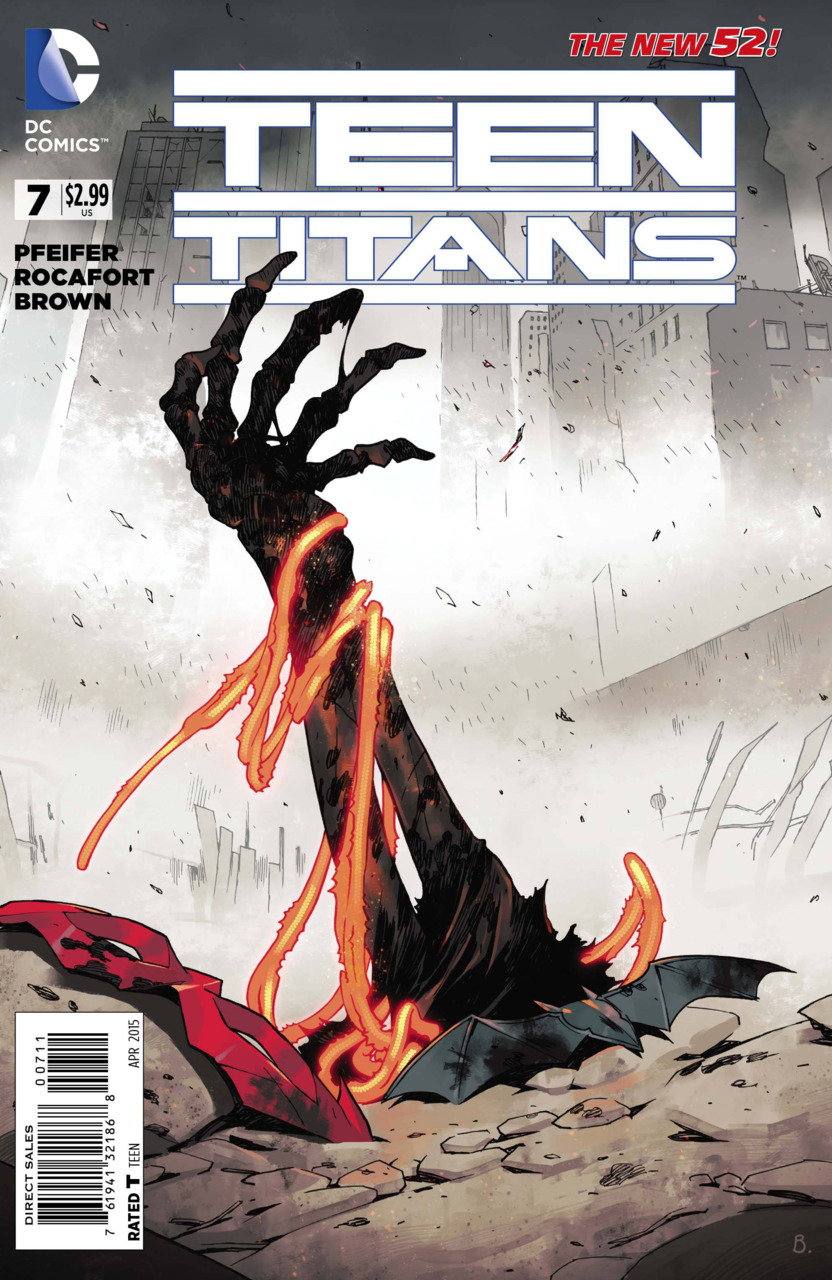 Teen Titans #7 continues the story from the previous issues. We open this chapter, “One Brief Shining Moment Part 1” in New York, Cassie’s apartment where Raven teleports in with Red Robin and Bunker to join Manchester Black, Cassie, the new Power Girl, and Cassie’s mother. They are responding to the disaster on Governor’s Island from the last issue. After a team discussion it is decided that the team head to the island. Red Robin makes sure that Raven can teleport the team just as Bunker gets a call from Beast Boy urging them to make it to the island immediately.

The team arrives and meets up with Beast Boy. While Raven helps the injured man from the previous issue, Red Robin discovers that there are no radiation levels. Raven looks exhausted and Black seems to know what is going on. Black mentions “Operation Paperclip” which everyone on the team has not heard of except Red Robin. Black explains it as a government program where the best Nazi scientists were recruited to work on the space program and other projects including the creation of S.T.A.R. Labs. Black says that they were building “things that should not have been built” Wonder Girl gets tired of the talking and leaves to scout the area.

We move to a group of people wearing chemical suits and full face respirators working on equipment. Suddenly Cassie lands in the middle of them. She grabs a person as others open fire on her. She leaves with her captive to reunite with the rest of the Titans. Oddly the people left behind are not concerned and continue working on their “plan”.

Gar expresses concern for Raven as the Titans prepare to interrogate the captive Cassie returned with. During the questioning Raven psychically links with the captive and sees the annihilation of New York. The captive, Hochstetler corrects Black as he presses for more answers. They are not going to destroy New York; they are going to erase the city. Black immediately realizes what Hochstetler is talking about but questions that there is not enough time to do what these people are planning. Hochstetler questions Black about time which makes Black realizes what the captive is referring to and jumps the man. Hochstetler vanishes and Black crashes onto the ground stating “they did it”. We see a holographic image of one of the villains addressing New York about a device under the city called “The Eraser”.

Red Robin picks up huge radiation levels under the city and pandemonium in the city with traffic jams and downed phone lines. Red Robin questions the timing of all of this. It will take weeks to set this plan in motion which Black said occurred in the seconds he grabbed Hochstetler to the time he hit the ground. Black reveals that another device created could slow time into a crawl and as he is describing this everyone seems to freeze except Raven. Raven realizes that she is the only one not affected except for Beast Boy who turned into a mayfly. The Mayfly is described as having the shortest lifespan which means that it experiences things faster than anyone else. By turning into the mayfly, Gar is immune to the time device. That does not make much sense to me. Time does not pass at a different rate for one species over another. This must be an example of comic book science.

We see some of the faces of the villains as they are preparing to position and activate the Eraser. We learn that the military has launched fighter jets to Manhattan to stop the threatened destruction of the city. The leader is not concerned saying that they will be frozen in time just like the others when Raven and Beast Boy teleport in. The leader makes and interesting statement that they were not just hiding in the labs for all those year, they were visiting much darker places as well. Beast Boy in the battle turns into a whale and smashes the area. He asks Raven to teleport the rest of the Titans in, who after some disorientation join the fight. In the mêlée the villains attempt to activate the Eraser which Bunker prevents with this brick powers. Beast Boy for good measure turns into a rhino and destroys the Eraser. All the leader says is that “this is all according to plan” After the battle the team realizes that the holographic camera was still turned on so the citizens of New York saw the fight and the victory of the Teen Titans.

As an epilogue Black is talking to Josiah Power. He says that all the loose ends have been tied up; the scientists are going to prison. The team relaxes and sees that they are the only thing trending on Chirper, The DC universe’s version of Twitter.

When things seem okay we go back to the prison transport and see one of the scientists burst through the driver compartment, crash the transport and we see that it is the leader escaping covered in flames declaring “all according to plan” as Red Robin asks Black about what he meant earlier by stating that the Eraser was the “second worst thing they ever built”. Next up Fame.

I thoroughly enjoyed this issue despite the “comic book science” with Beast Boy. There was a period where the team was trying to find out what was going on so we were able to see the interactions of the characters which I usually enjoy. In good comic book fashion we got the fight in the end followed by an epilogue and the all important cliff hanger ending.

What I found most interesting is Raven. She seemed exhausted after she used her powers and that was not lost on Gar or Tim. I do not remember seeing this about her in the past and I am interested in seeing where the writers will take this story line.