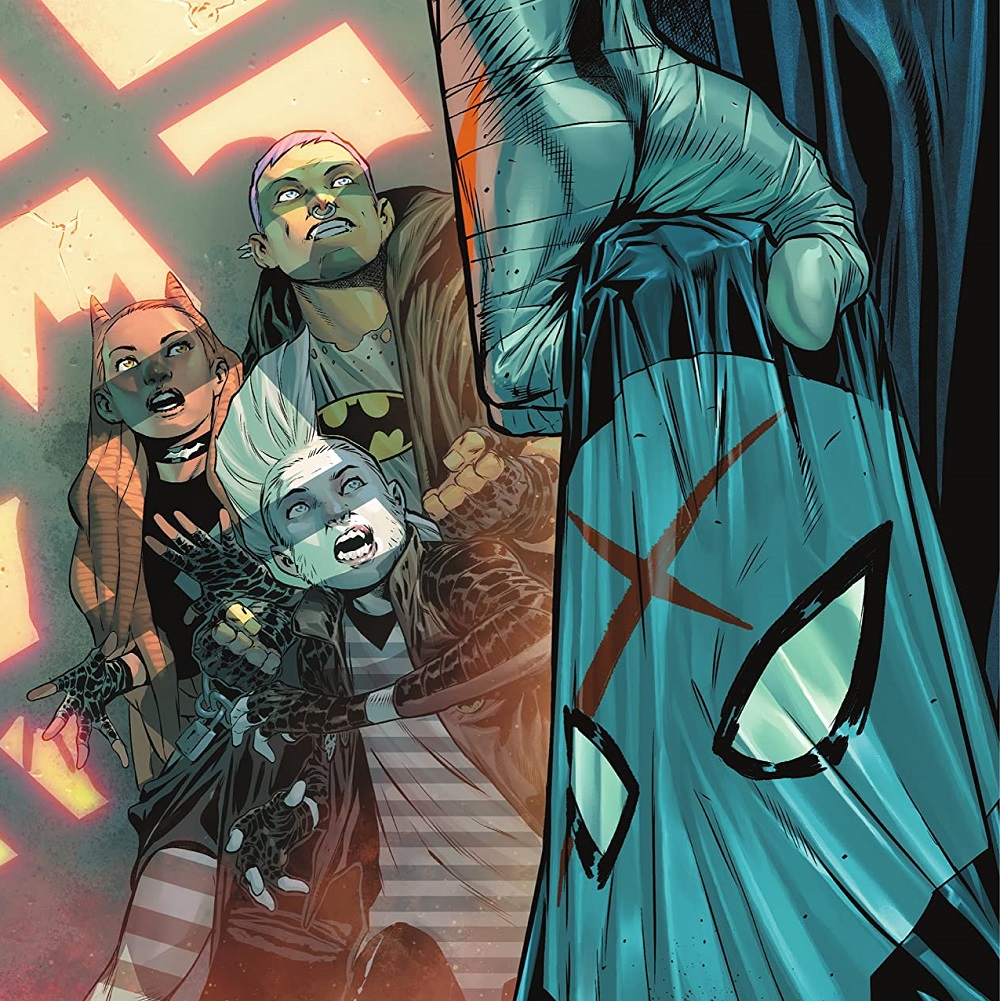 Overview: The Bat Pack’s origin story is partially revealed along with the incentive behind Red X’s actions in Teen Titans Academy #5.

Synopsis (spoilers ahead): Gotham. Anywhere else in the world, the city would be considered unlivable, even dangerous. Yet still, it feels like home for Diego Perez, orphan, and resident of Beaumont Home for Children, thanks to the city’s watchful protector: the Dark Knight. On this particular night which begins Teen Titans Academy #5, Diego’s attempt to escape and run away from his foster home and chase after Batman, one attempt of many, is thwarted by Nightwing, who brings him back to the foster home, once again. Later, Diego sullenly vents to his two friends, Lucas and Merissa, and recounts how close he was to keep up with Batman in the streets of Gotham. Diego hadn’t been chasing after Batman for no reason; there are kids disappearing from the orphanage, and until the Bat Pack can get Batman’s attention and pass the case off to him, it’s up to the three teens to figure it out.

That night, they sneak into the administrator’s office, head of the home for orphaned kids, searching each nook and cranny for any clue that might lead them to the missing kids. Their investigation is brought to a halt by the door opening behind them, and they all quickly duck out of sight. Two men, the administrator and a man called Doctor Grusel enter, discussing the amount of ‘product’ left for the doctor’s experiments. After browsing through a folder, Dr. Grusel finally makes his choice; “Laporte, Lucas” will be the subject of his latest experiment, and with that, the two men leave.

Diego is quick to follow and catch up with the two men, stopping them long enough to convince them that he is actually Lucas Laporte and to purposefully let himself be taken away. Unbeknown to either of them, Merissa and Lucas follow secretly behind, arriving behind them at the abandoned hospital where Dr. Grusel is holding Diego captive in order to perform his experiments. Dr. Grusel believes he is bestowing a great gift on the boy, work that Kirk Langstrom never fully completed – a serum to cure the disease of humanity itself and rebuild the person into an apex predator, a creature of the night.

The injection knocks Diego out, only for him to reawaken as his friends arrive to rescue him. They manage to free him, but before any of them can make it out, Dr. Grusel transforms into a giant man-bat. They make a mad dash for the exit but come up against a dead-end, trapped and defenseless against the monstrous form of Dr. Grusel.

Suddenly, an ear-piercing noise causes the doctor to collapse and wraith in pain. The cause is revealed as the creature crashes to the floor; Nightwing used a dog whistle to knock the doctor out. The whistle produced a pitch at a frequency outside the spectrum of human hearing, terribly effective on animals with sensitive ears. Diego is shocked because he was able to hear it, too, and he was only human hours before. It becomes apparent then that Dr. Grusel’s serum was effective; the hearing and sharp fangs are new, but welcome, developments for Diego.

In light of the recent events and horrid experiments by Dr. Grusel, the orphanage has been shut down by Commissioner Gordon, who had received a rather thick file folder left at the police headquarters, courtesy of Merissa and Lucas. Nightwing acknowledges that what the three teenagers did was impulsive, but also impressive. He regards the kids in front of him and asks, “…ever been to New York?”

In the present at Titans Tower in New York, the Bat Pack sits around their dorm staring up at Red X after they finish recounting to him their origin story. Red X agrees that a deal is a deal, and removes his mask, revealing his identity to the Gothamites. Nightwing had seen something in the three of them, and now Red X sees it too, except he wants them on his team, not Nightwing’s. As they gaze up at him, Red X states that the Titans will never show them this kind of trust and that their school isn’t any different from Beaumont Home. What are the teenagers even training for? Red X continues, each student is simply artillery to the Titans, cannon fodder to be used in a war they didn’t start and can’t finish.

Before departing, Red X leaves them with one ultimatum; the next time they meet, he wants their answer. Are they going to keep being the Titans’ loyal mascots, or are they ready to join a better pack, one that’s looking out for them? The Bat Pack doesn’t have a lot of time to discuss their next move before they’re brought up to the top of the tower with their fellow teammates to witness the firework show put on by the Titans to congratulate them all for finishing their first term. “We really did it, you guys,” Diego says looking up at the colorful sparks in the night sky.

Merissa agrees. “Yeah. The question is…what do we do now?”

Analysis: Teen Titans Academy #5 opens up with a flashback to Gotham City, home of the three teenagers known as the Bat Pack. Steven Lieber brings the gritty, dark streets of Gotham and the citizens living within the city to life through his art, leaning more towards an indie-comic style of illustration that blends well with the colors done by Dave Stewart and the story written by Tim Sheridan.

It is within the following pages that the history of Diego Perez (Chupacabra), Merissa (Bratgirl), and Lucas (Megabat) is revealed, and how the leader of the trio came to be known as the man-bat hybrid, Chupacabra. The group is composed of true bonafide Batman fanatics, and despite trying to get his attention to pass the conundrum off, they find themselves facing a mystery within their orphanage and seek out to solve the case of disappearing children.

Teen Titans Academy #5, while it focuses on all three of the teenagers, is truly written as Chupacabra’s origin, and it showcases a little bit more of his and his friends’ teen-crime fighting skills and abilities.

In all honesty, I can totally get behind a group of Batman fans and friends getting together to solve some crimes and be a little heroic, although the convenience with which everything gets solved so quickly and efficiently did detract from the story.

Red X revealing his true motivations– which can be loosely translated to “no more child soldiers fighting useless wars”–makes sense in light of the character flashbacks we saw in previous pages. Now, what exactly the ‘war’ is that the anti-hero is referring to, is the question.

Overall, Teen Titans Academy #5 does a good job giving us at least a tiny bit more information on three of the students at the academy, and what brought them there. However, I did find the pacing of the story to be a bit rocky, with a lot being crammed into twenty-four pages, and truthfully what, exactly, prompted Red X to unmask and share his identity to just the three teenagers from Gotham eludes me.