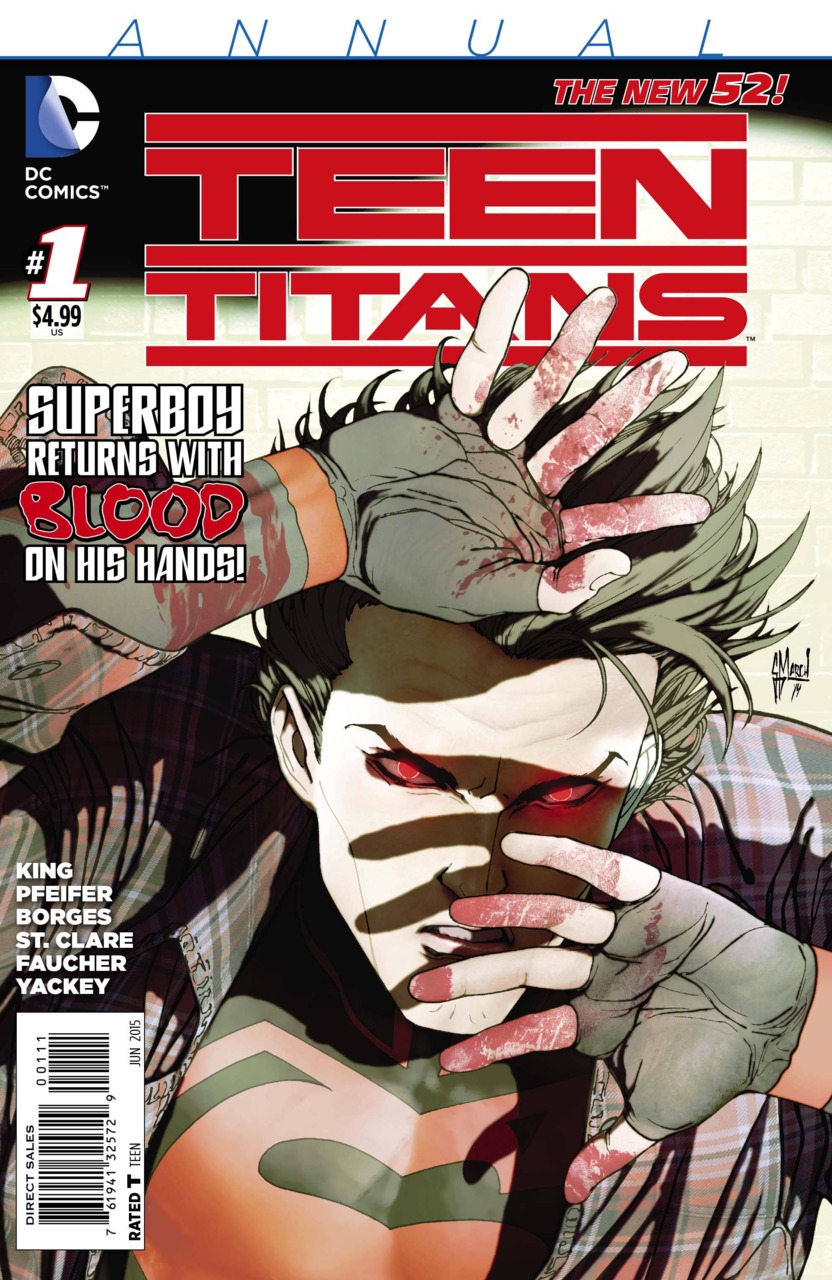 Teen Titans Annual #1 starts with a massacre with a voice over prayer. Several dead bodies are shown, male and female. We see a woman kneeling in the area with blood on her boots and jeans. We see Superboy covered in blood lying nearby.

We cut to Manchester Black and Red Robin. Black is recounting the story of the massacre. Red Robin contacts Bunker to see if he is seeing the same news reports. Bunker confirms that it is all over Chirper and Gar and Tanya (Power Girl) are checking if the news has reached the “old media”.   Bunker asks about Raven and Red Robin assures him that she does know.

Black asks about the last member of the team. Red Robin states that he is not forgetting her; he cannot just call her with the news. We cut to a park with Wonder Girl. She looks distraught and appears to be crying.

We cut to the police station where we see the detective ranting about having to cuff a super powered being. The detective is identified as Detective Christopher and he is introduced to Detective Jones and he will be taking over the questioning of Superboy. Christopher argues stating that A.R.G.U.S. has been notified and is sending agents to transport the kid. We see Jones’s eyes glow and he appears to control Christopher’s mind who withdraws to check on the witness.

Jones approaches Superboy and transforms into the Martian Manhunter. Back at the part we see Cassie’s phone in her hand. It has a picture of her and Superboy probably when they were fighting each other in the beginning of the last Teen Titans series. Red Robin is there and he says that Superboy did not do it. Cassie thinks he did. As the two characters argue we see motion lines in Cassie’s hands and the screen starts to crack. Cassie holds on to her belief that Superboy did kill those people.

Back to the police station Manhunter probes Kon’s mind. Manhunter sees that Kon killed the people but in the probe Manhunter reveals to Kon that the people were not human, they were Durlans.

Christopher is seen entering the interview room where the witness, Ms Lauer is sitting. He tells them the Jones has arrived and everything is being taken care of. Lauer immediately states her name and that she is not an alien while grabbing Christopher’s shirt. We see a shot of her hand holding Christopher’s shirt and it starts changing to an orange color with a black sleeve. We pull back and see that she is an alien and she is lifting Christopher off the floor. She transforms into the image of Christopher while finding out what room Superboy is being held in. The alien leaves.

We cut to a dark Mistress Photo session where the band insists that Raven take part in the pictures because of her “crowd control magic”. The band talks about the black and white t-shirts that one of the members ordered. The plan is to put some of the photos on the t-shirts. Raven takes one of the shirts saying that the shirt is for a friend.

Back at the police station, Manhunter is shown crying stating that Kon know the peoples were Durlans. Kon says he does not know what Durlans are. Manhunter is enraged and attacks Superboy accusing him of killing the Durlans. We see an orange hand touch Manhunter’s shoulder and change into Manhunter and pushes J’onzz away into the wall. Manhunter identifies the alien as Ra’ut. She says that Kon is not responsible for the killings, she was there. Manhunter insists that he is. The two square off and blast each other with eye beams which meet in the middle and cause an expansive explosion in the station.

Back in Bunker and Beast Boy’s apartment we see Miguel (Bunker), Gar and Tanya relaxing and musing about where the studio lights for Miguel’s reality show should go. Tanya wonders why the others are not concerned about Superboy.   They are, they just do not think they can do anything.

Ra’ut takes Superboy’s hand and leaves before Manhunter can recover from the confrontation.

Red Robin is shown rallying the team; one of their own is in trouble. We see each of the Titans as they receive Red Robin’s message except for Tanya.

Ra’ut uses Superboy’s TK powers to allow her to fly away with him. She recounts briefly who she and her people are and that they had a conflict with the Green Lantern Corp. In this scene we learn that Ra’ut is not Ruth Lauer, she just had access to her memories and she did not see Superboy kill the people. They are on their way to see Ruth. Ra’ut loses strength and she needs to rest first. She tells Superboy that he has to find his friends as she falls too weak to fly. Superboy catches her as she turns into Ruth. Superboy knows where he needs to go.

Red Robin joins to Titans in Bunker and Beast Boy’s apartment. Bunker votes to help however Red Robin says it is not up to a vote. Superboy is already at the apartment. Cassie is shocked and immediately argues. Raven gives Kon the shirt she brought. Cassie slaps Kon and recounts the last time they were together in the future and calls Kon a liar. Superboy in confusion throws a couch into the television destroying it. The Titans are cleaning up the mess when Tanya questions Red Robin’s leadership. She believes that Kon is the killer. Raven, Red Robin and Kon are in another room while Kon gets dressed in the shirt and jeans. Red Robin says that it is missing something. Cassie is on the roof trying to call Manchester Black. Ruth awakens and turns into Ra’ut saying that he is here. Manhunter crashes through the wall looking for Kon. He attacks Beast boy who turns into a hippo to fight him. Ra’ut attacks and is dispatched by the Manhunter. Red Robin and Raven are shown coming out and are stopped by Manhunter. Superboy comes out complete with the Superboy symbol on his shirt and attacks Manhunter drawing blood. Cassie comes down from the roof as Kon is pounding Manhunter in the face. She jumps Kon to stop him. She uses this incident as evidence that Superboy is capable of the crimes he is accused of. Red Robin is convinced that he did not do it. Tanya is not so sure. Red Robin starts preparing the team to leave. Tanya says no. Red Robin is incensed. Who becomes irrational shouting about our team and your team and that he built the team. Cassie calms Tim down and they leave leaving Tanya and Cassie behind. We see Black sitting on the unconscious body of the Manhunter. Black says that they need to bring the Titans back. Tanya wonders how the three of them are going to bring the Titans in. Black brings Wonder Girl and Power Girl to subbasement 52 of S.T.A.R. Labs where we see another team. Cassie and Tanya are to join them to hunt the Teen Titans. To be continued in Issue 9.

There is a lot in this issue. This is the start of a new story arc and I have a lot of questions here. Where does Martian Manhunter fit in? Is he involved because aliens were killed? If Superboy did not kill the Durlans, who or what did? What is Black’s angle in this? Was he hoping and prepping the Titans to join his team? Does this mean that Cassie and Tanya will quit the Titans? Unfortunately we will have to wait three months to continue this arc.

I did not like the characterization of Red Robin. He is shown as closed minded and irrational in this issue. He has one thought that Superboy did not kill the Durlans. He has no evidence to the contrary because he was never able to question Ruth. Is this book going to become the journey of Red Robin to become the character we see in the Future’s End series who in five years will become Batman Beyond? I like the evolution of characters but this feels like a check off that needs to be checked to reach a defined end point.