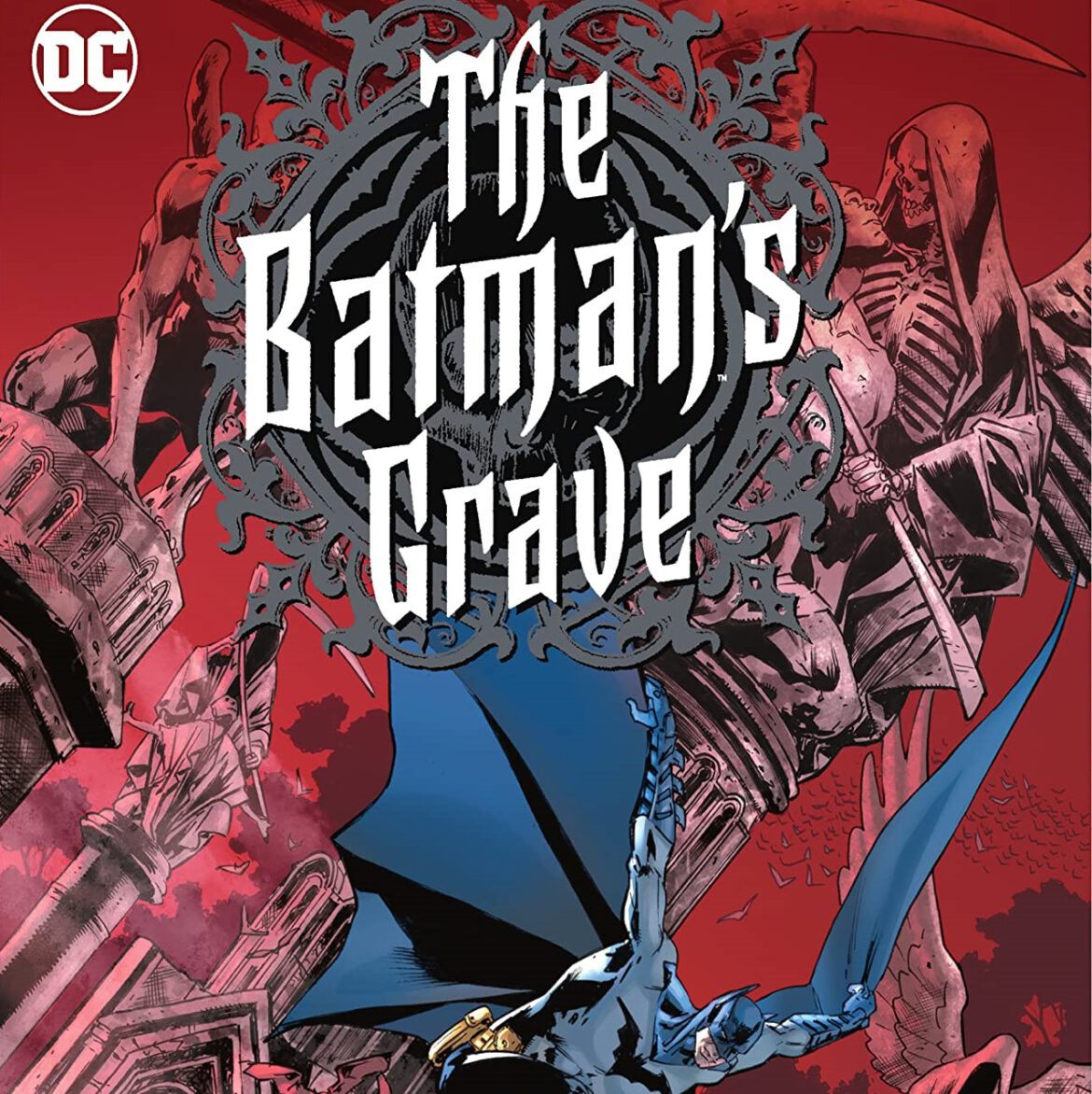 Overview: In The Batman’s Grave, once a week, rain or shine, Alfred Pennyworth walks to a little cemetery plot on the Wayne Manor grounds. He meticulously tends to Thomas and Martha Wayne’s headstones, plinths, and slabs: weeding, cleaning, polishing. But how much longer before there’s another Wayne memorial to tend to? Batman’s current case forces him to inhabit the mind of a murder victim with a half-eaten face – sending him on a collision course with an enemy who has infiltrated every part of Gotham. Every corner Batman turns leads him one step closer to his own grave!

Editor’s Note: This collected edition includes all twelve issues of the maxiseries The Batman’s Grave that had its first issue released in October 2019 with the final issue releasing in December 2020. This review focuses on the story as a whole rather than the individual issues that made up the maxiseries.

Synopsis (spoilers ahead): The Batman’s Grave begins with one of those nights in Gotham. 9-1-1 calls are being placed on hold, and Batman is busy. He just saved a cop and his family from being killed by a gang with strange tattoos on their necks, and now Batman is responding to a 9-1-1 call that the police will not.  A man is dead in apartment 4C, a Vincent William Stannik. Half of his face has been eaten. Stannik worked in the District Attorney’s office, and following a mental breakdown, he is dead. Batman has a mystery. It is clear that Stannik had a fixation on Batman; his apartment walls are covered with photos and newspaper clippings featuring the Dark Knight. Bruce seems to enter the mind of the victim when he notices something.  Batman arrives back at the apartment and looks under the bed and finds the killer with blood still on his lips.

Batman and the killer fight, with the killer appearing to win the fight at first. Batman resorts to his weapons, including a flash-bang.  The killer feels very little pain, but Batman is able to prevail and deposit the killer to the cops. Bruce returns home. The next night Commissioner Gordon calls with the signal. The killer is named Eduardo Flamingo, and he is happy to tell his story and make friends.  It appears that Flamingo will go to Arkham. Gordon has another case. Bobby Turton, a corrupt Assistant DA who escaped charges and went into private practice, is dead. This homicide is weird.  Batman takes the case.

Bruce runs some labs and goes to take a look at Turton’s place, a huge mansion. Batman enters and starts investigating the crime scene, but he is interrupted by another. Just as before, this guy immediately gets the upper hand, and Batman has to resort to his weapons. Batman does escape with a sphere that could be a clue, a smart speaker. Turton was a walking pharmacy. The drugs Turton was taking have been prescribed, and the speaker was sending third-party commands to Turton. Bruce goes and thinks again; this time he enters the mind of Turton. Turton was told by the device to kill himself.  Batman needs to investigate the psychiatrist that prescribed the meds to Turton, Dr. Karl Helfern.

Batman decides to upgrade his suit for this meeting as the previous two fights were harder than expected. Batman attacks first and now he has to fight three guys including the guy at Turton’s mansion. The fight is brutal, but Batman is victorious. Helfern overdoses himself.  Despite Helfern’s state, Batman does learn about the Scorn Army before the psychiatrist collapses.

Batman and Gordon head to Arkham. Warden Jerry Arkham meets Batman and takes him to Flamingo. The Scorn Army uses the sign that was tattooed to the necks of the gang at the beginning of the story. Batman decides to interrogate Flamingo.  Before Flamingo can talk, an orderly shoots Batman in the back and kills Flamingo. Batman disarms the orderly before he can kill Gordon. Now Gordon and Batman have to fight to get out. Warden Arkham runs off.  The Scorn Army is targeting the justice system.

After an extended fight and escape scene, the two escape. Three hours later, Gordon calls Batman again. Cornelius Stirk, an inmate at Arkham, escaped. This guy eats his victims’ hearts. That will have to wait, Batman tells Gordon, as Dr. Daniel Kaysen of the GCPD’s CSI unit is dead in his home. Batman thinks again, and Batman presumes that Kaysen may have solved his own murder.

Batman leaves the home with Gordon. He needs to track down the surveillance video. Batman tells Gordon to put the department on alert. Just then, the Batmobile explodes. Alfred has to pick up the Dark Knight in an alley and take him back to the Cave. Now transit cops are being targeted by a Colonel Sulphur. Also, the Scorn Army is attacking officers on the street, but Batman has a tank that can run by remote control. This will allow Batman to track down Sulphur. He easily catches the killer and brings him to an abandoned warehouse to interrogate him.

Sulphur gives up the info and Batman goes to meet Scorn himself. After a short discussion, the fight begins and Scorn blows up the street, leaving Batman with a small clue of his blood. Batman is able to discover that Scorn is the son of the “Good Thing Killer” who died in a gunfight with the police in front of his son, Robert Anthony, who is now Scorn.  Batman is called to Arkham, Jeremiah Arkham is dead, and it looks like Stirk is the killer. Now Batman has to be the warden of Arkham Asylum.

Batman connects all the deaths to Anthony. Scorn is behind it all for revenge against the police. The Scorn Army now targets the asylum, and Batman leaps into action again. All of these fights are starting to take their toll on Batman. He actually passes out in the Bat-tank and forces Alfred to take it home on autopilot. The war between the Scorn Army and the police continues to heat up as Alfred tends to Bruce’s injuries.

Batman has to take the streets again. Stirk, however, decides to pay a visit to Wayne Manor. Alfred shoots Stirk and calls Bruce.  Alfred admits to Bruce that he used frangible plastic bullets, but Batman is still not happy about the gun. Batman deposits Stirk to Gordon.  Scorn is the opposite of Batman; he wants to destroy the criminal justice system. Batman decides to make Scorn question himself. A news conference is called.  Lee Anthony, the father, killed his wife and then killed himself before the police shoot out.

The Scorn Army now attacks police headquarters. Batman goes to meet Scorn. Scorn leaves Batman severely wounded, but Batman is able to get back to Alfred. Time for an upgrade.

Batman goes out to meet Scorn one more time. The police arrive to bring Scorn in, but Anthony shoots himself in the head. Batman returns home. After one last fight with a member of the Scorn Army driving a garbage truck leaves the tank totaled, a wounded and exhausted Batman on foot arrives back to the Manor grounds and collapses at the graves of Thomas and Martha Wayne and the empty grave of Bruce Wayne.

Analysis: This is a stand-alone story that has no hint as to when in continuity it occurs. There are none of Batman’s allies except for Alfred and Gordon, so it is unclear who or if there is even a Robin. I liked The Batman’s Grave because of its familiarity and its uniqueness.

This is a good character study of Batman. I like stories that pit him against himself.  Robert Anthony sees his family gunned down just as a young Bruce Wayne did, and he decides to gain vengeance. Bruce fights against the crime that killed his parents, whereas Anthony goes against the police and the criminal justice system that he sees as the killers of his parents. In the end, Bruce is able to see the similarities, and before his own death, Anthony starts to see his similarity to Batman.

Alfred’s dry humor is a welcome addition to this story.  This story is a very heavy story to read, especially in the collection form. Alfred, who worries for his friend, does quip about Bruce donating his tech to the police and maybe even finding another line of work.

Gordon shares his humor with us as well.  He bemoans that the only way he can contact his masked helper is by shining the signal, which as he puts it, terrifies the city.  He is even shocked to find out that Batman has his phone number and grumbles again about not having the phone number of Batman.

The use of Bruce’s thought sessions was interesting.  He starts out thinking and slowly we see him placing himself into the subject and that is how he is able to think his next move. That is an interesting storytelling technique that I have not really seen before.

The main issue I find with this story is that it really is not memorable. I had a hard time remembering this story compared to some other recent stories I have read. With that said, it is a very entertaining story. Every death was a step to the answer, and the final big bad was not revealed until after the midpoint of the story. That creates a mystery but not the type that allows the reader to solve the crime on their own as we do not even meet the character of Robert Anthony until the reveal. We do not get to see who Anthony is outside of his identity as Scorn.

The art in The Batman’s Grave is very detailed. My favorite page is the final splash page that shows the beaten-down Bruce Wayne collapsing over the graves. The detail shows the damage to his suit and some of the wounds, especially the jagged piece of metal exiting his lower side.  Artist Bryan Hitch even uses iconic images of the shadow of the bat to great effect.

Editor’s Note: DC Comics provided TBU with copies of the original issues as they released, but not of this new edition. You can find this collected edition and help support TBU in the process by purchasing this edition digitally either through Comixology or Amazon, or as a physical copy in a hardcover form at Amazon.

The Batman's Grave is an entertaining story that makes the reader think as well as feel, and overall, it's very satisfying.