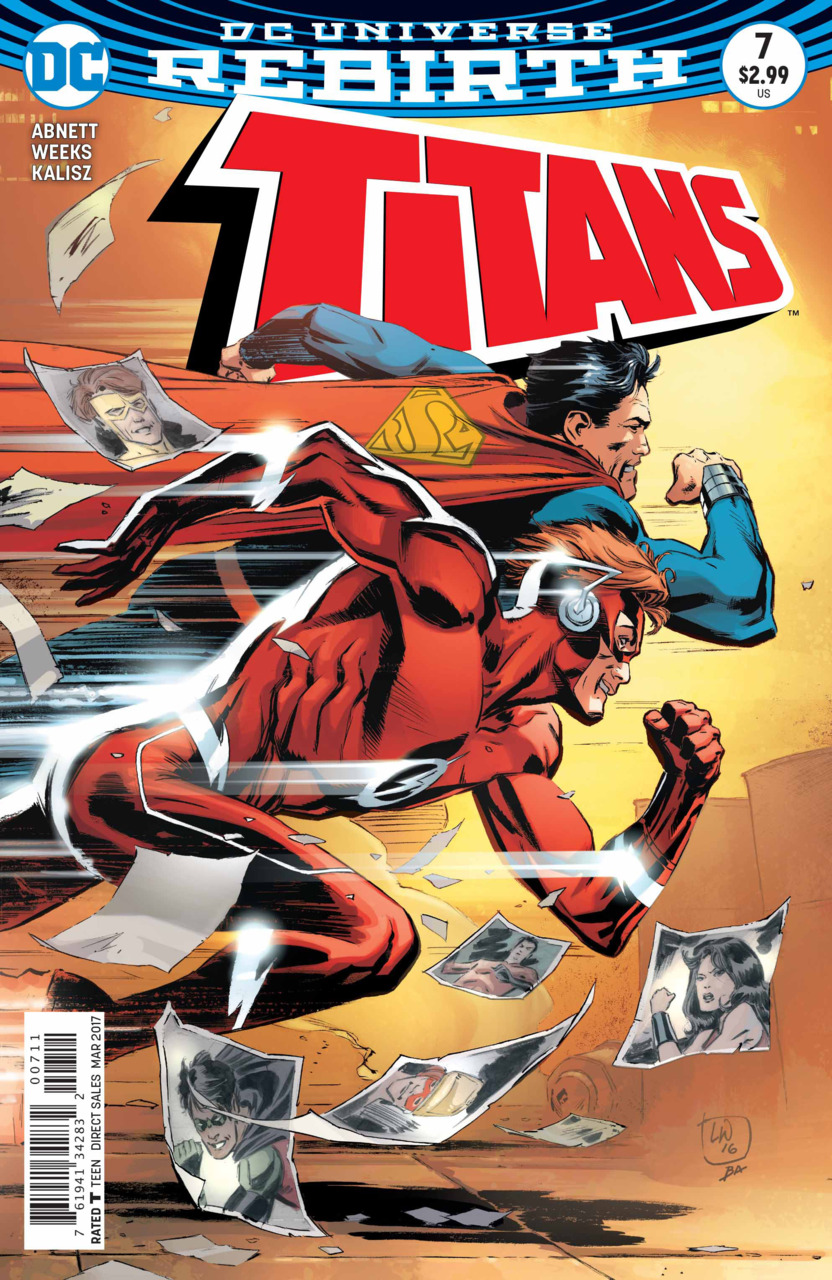 “Home Sweet Home” opens in Manhattan six weeks later. Flash, Arsenal, and Donna Troy are fighting a super sized Meta. In the fight Donna is smacked off and flies towards a building only to be caught by Flash before she crashes into the building, giving Arsenal the chance he needs to release a flare arrow bringing the giant down on top of some cars. Donna is then able to land the knockout blow winning the fight. She asks the others about who the guy is and stumbles into an argument between Flash and Arsenal. Flash is accusing Arsenal of not having any care for the property damage their fights are generating. He was able to prevent Donna from crashing into a building while Arsenal was responsible for the crushing of a couple of cars. Donna leaves the argument to assure the crowd that the crisis is over when Superman shows up to see if he is needed. He finds that he is not and says to Wally that it is good to see him again and flies off. Flash chases after him leaving Donna and Arsenal behind. Superman assumes that Wally is up for another race and the two speed off.

We cut to Nightwing, Lilith, and Tempest talking with a lawyer. They are looking to set up their operations in New York. While Nightwing talks to the lawyer, Ms Cendali, Lilith reads her mind and sees that she still has 87 more forms to go through. Tempest messages the dolphins to let them know that he will be late for training. Lilith is surprised that actual dolphins can text. Cendali mentions the speed the Titans constructed their headquarters. Tempest says that he borrowed fabrication units from the high artisans of Atlantis. The building grew in eight hours. Cendali mentions the Titans aircraft. Nightwing offer to show her the plane but Lilith says that she can’t because it is invisible but Tempest says that it is not always invisible. The four of them go to the hangar. When Cendali sees the plane she says that there will be more forms. Cendali asks why the Titans want to make their base in Manhattan.

In midtown Manhattan, Donna and Roy eat at a diner. The two wonder about the Meta they fought and where he got his powers. She asks Roy if he should be wearing his goggles since he took them off. Roy is not concerned because he knows that everyone is looking at Donna and not him, which is confirmed by some onlookers who think that they are sitting next to Wonder Woman and some guy. The two muse about flirting when Donna confides in Roy that she does not know where she came from. The two leave the diner and Roy says that maybe Donna should talk to her stepmom. Roy tells Donna that he looks at her and thinks that there is a girl who needs to know herself better. Donna asks Roy if he looks at her often. Roy says that looking is the best he can hope for and Donna hugs him and kisses his cheek. Donna heads off to dig up information the Meta who the cops say is Tyler Wendt.

We get an interlude with Mal and Karen. They have an appointment at a firm called Meta Solutions. The receptionist buzzes the office. Psimon who is in the office transforms into an executive to meet the couple.

Back at the Titans base Lilith explains that when she scanned Abra Kadabra the only word she got was Manhattan. The Titans either need to live in Manhattan or something will happen, either way, the Titans need to be in Manhattan. Wally designed the building and Cendali starts to leave when Donna and Arsenal show up and Nightwing introduces them to Cendali. Flash shows up and with him a hovering Superman. Cendali leaves saying that there is too much super stuff going on. Superman greets the Titans and says that the Titans Tower reminds him of the old days. Next issue Titans Take Manhattan.

This was the cool down issue after the Abra Kadabra arc. It is a chance to wind down and get some character development. We get a great exchange between Wally and Superman as the two have similar experiences of remembering different worlds. Wally and Superman both have memories of a world in the past, before the New 52.

We also get an interesting exchange between Donna and Roy. Dan Abnett continues with the idea that they had a prior relationship and that may spark again. The new design of Tempest I am not a fan of. He just does not look right with a van dyke beard.

Despite that minor nit pick, still a very good issue.