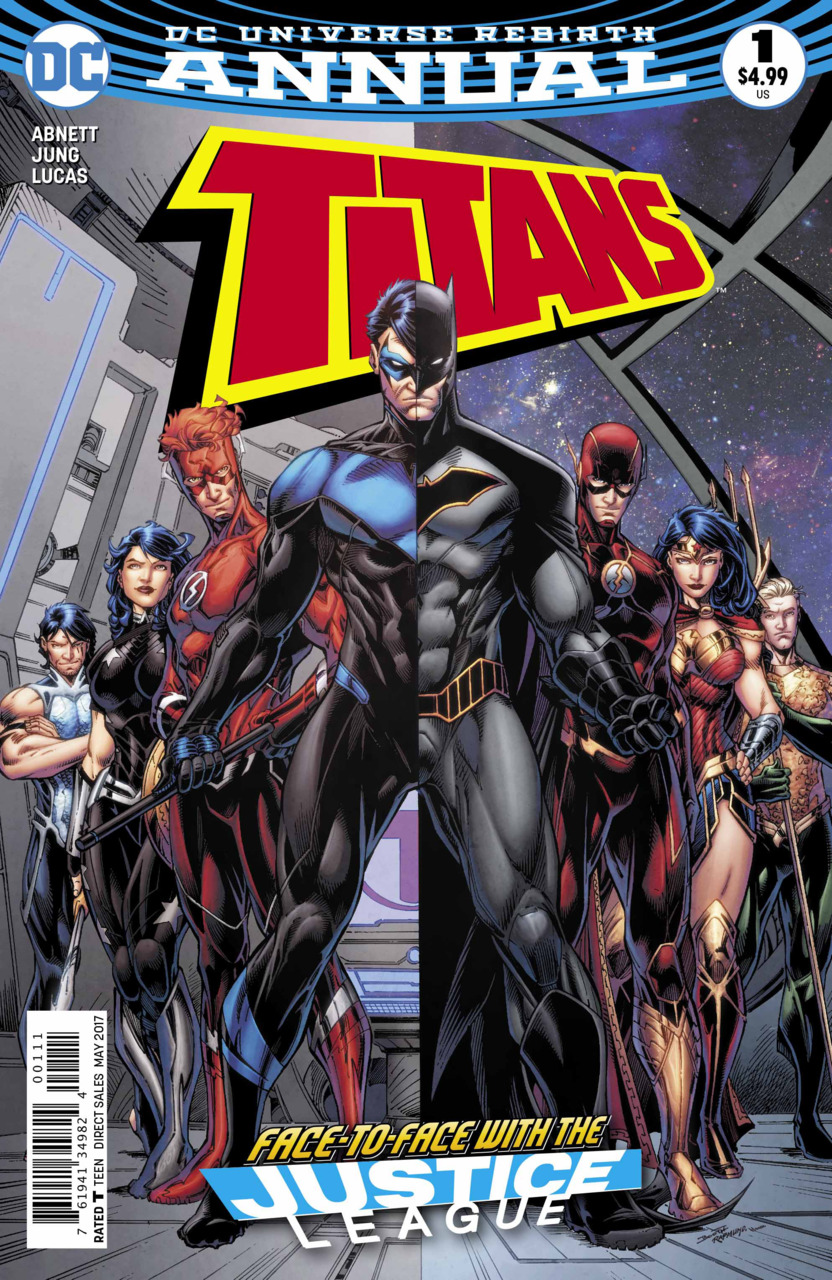 Synopsis: Somewhere in an underground bunker, Garth yells out for anyone who might be able to hear him. Wally appears and is quickly followed by Barry. They realize that they have no idea how they got to this place only that they are alone. This changes as other members of the Titans and the Justice League come into the room. The protégés and their former mentors share some “pleasantries” before turning to the main issue of who brought them here and why.

As the teams begin to question who each of them are and if an imposter is in their midst, they are being watched by The Key. Although he is actively watching and holding them, it is clear that he is addressing an unseen master. It is clear that his goal is to break apart these teams of heroes.

Back in the bunker, Nightwing brings up the possibility that one of them may not be who they say they are as evidenced by Wonder Woman’s lasso being gone. Their conversation does not last long as the team is attacked by both a Metallo and parademon copies. After fighting these threats off with relative ease, the real problem comes full circle as Batman identifies that one of their team is not an organic being. The team begins to unravel as each member calls out another for being the imposter. Finally the League members land on Donna Troy as the imposter.

Wonder Woman stops the arguing and defends Donna Troy, but also admits that she is not organic. She was created to destroy Diana and implanted with false memories by the Amazonian to keep her from this dark destiny. The pain and shock of this realization taps into the search being made by outside Titans members. Nightwing, Wally, and Garth comfort Donna and show their strong bond that the League seems unable to understand. Donna’s severe stress seemed to weaken the barrier around them and Batman identifies where The Key is hiding.

They break into the hideout and try to capture The Key. They are reinforced by other League and Titans members who have teleported inside. Unfortunately, The Key is able to create a doorway and escape.

After both teams leave the hideout. Nightwing and Batman discuss the implications of the realizations that they uncovered in the bunker. Nightwing assures Batman that they will take care of Donna. The issue ends with the mysterious master of The Key punishing him extremely for failing to free him or her and extracting enough power from Donna Troy.

Thoughts: Having only tuned into the Titans series after Rebirth a few issues, I was pleasantly surprised with how much I enjoyed reading this annual. It is a self contained story about the differences between the Titans and the Justice League, and although nothing was entirely new, it was still a good read. Abnett takes what we know best about these characters and brings it all into a meaningful story that shows how the Titans’ bond of friendship helps them to be, arguably, stronger even than the League.

Regarding the overall plot, I liked seeing a smaller scale story that featured the relationships of these icons rather than a large scale event. Although there was action, it was meant as a purposeful distraction to the teams (as it can sometimes be an unintentional one in normal stories for us as the readers) that only helped to focus the real issue of these heroes realizing how each of them see one another.

The artwork in the annual only helped to serve and better the story. The team of Jung and Lucas created dynamic action sequences peppered in with great character designs. The contrast and similarities between the mentors and their protégés was also cool to see here. I especially liked how Barry and Wally were drawn and portrayed in this story.

Overall, the annual was a great self contained story and did what I think it should do..it made me more interested in checking in with the Titans going forward and did not confuse me with any previous storylines that might have been necessary to understand this one.