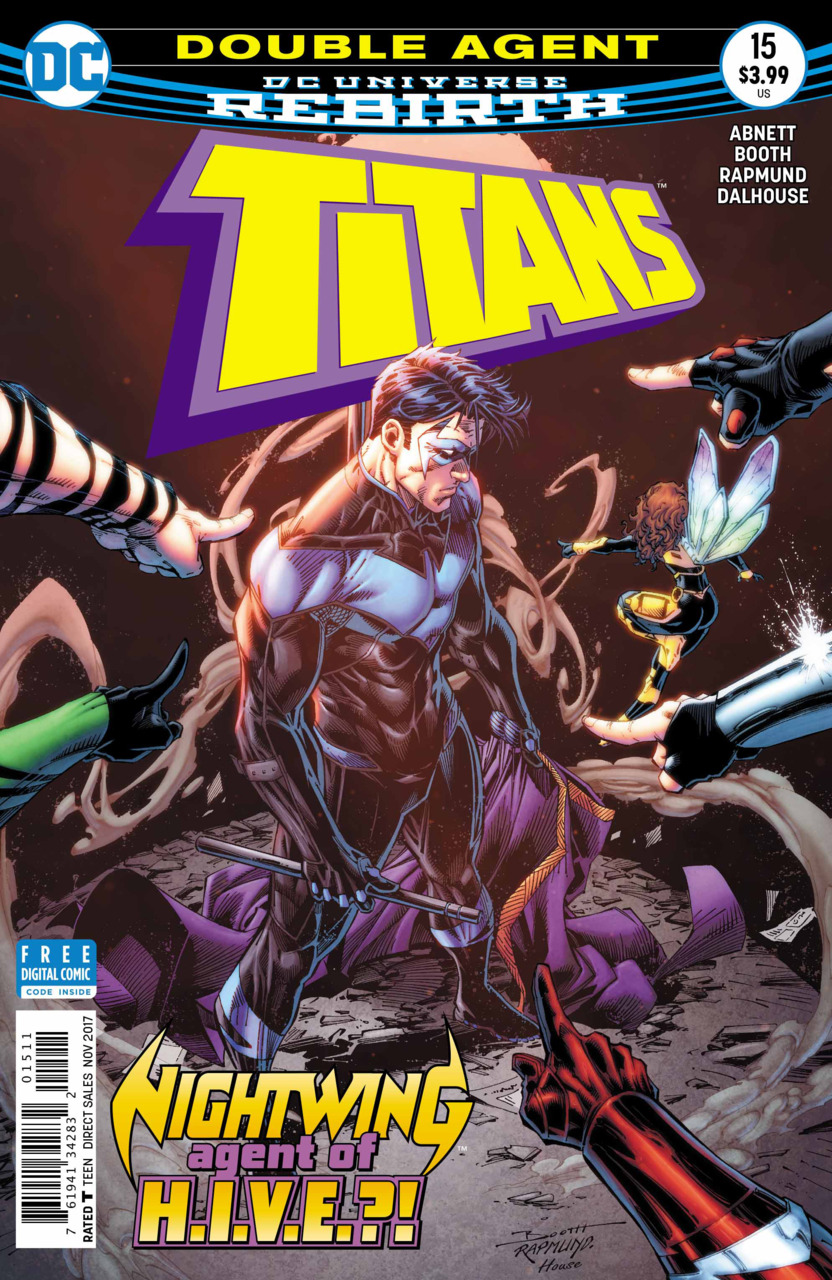 Overview: Dick Grayson explains to the team that he was not a willing agent of H.I.V.E. but rather became a double agent to discover H.I.V.E.’s location. In the ensuing battle the team face brainwashed Gnarrk and Mal Duncan and this could be Wally’s last mission.

Synopsis (spoilers ahead): “Double Agent” starts with Arsenal leveling an arrow at Nightwing’s neck asking him who he is talking to. All along we read a letter addressed to Dick saying that Dick is the writer’s best friend and will never let the team down.

We find that the writer is Wally West. Donna comes in the doorway and says that even though, she is not talking to him (see last issue), she does want to know if there is any news from Nightwing and the verdict of the brain scans. Wally says no and he and she agree that it could not be anyone on the team. Wally apologizes to Donna saying that Roy and him were idiots for fighting over her affections. Donna asks if the letter he is writing is to her, Wally wants to focus on their kiss. Donna says that the kiss was a moment of empathy as they are both “adrift” in their lives, Wally being erased and Donna discovering her true heritage. Donna does not know if she has romantic feelings for Wally, but she does know that she does not want to lose his friendship. They are interrupted by a shout demanding for everyone to assemble.

Everyone arrives to find Roy and Dick. Roy is declaring that Dick is the traitor and he was talking to H.I.V.E.. Garth says he is going to kill Dick and Wally races to stop Garth and catch Roy’s arrow. Wally starts to defend Nightwing saying that Dick has to have a simple explanation. Dick does, he admits to being H.I.V.E.’s spy for several weeks.

We shift to Gooseville, Maryland. Mal and Gnarrk are continuing their smack down on the H.I.V.E. agents. Mal finds the directory of all their locations across the United States. Gnarrk smells something new, but something that he knows. They hear a voice that Mal knows; chastising the two for poking their noses where they are not wanted. We hear a sound, see smoke build up and see some feathers.

At Titans Tower, Dick begins his explanation. Dick says that Gizmo infected him with nanotechnology spyware when the team faced the Five at Meta Solutions. Dick only discovered the infection when he ran the scans on the team. Roy insists that Dick was talking to H.I.V.E.. Dick admits it, but he was working to surprise them to stop them from deactivating the spyware. He got 20 seconds, just long enough to run a race. Dick knows where H.I.V.E is. Karen hugs Dick saying that he is amazing and Roy starts to apologize, but Dick interrupts him. Dick admits that there is too much Batman in him and he wants to stop being secretive so the team will trust him again. Wally begins to speak when Garth shouts that he is in love with Lilith. Dick surmises that H.I.V.E. needed them for something. And Lilith comes in and says that H.I.V.E. wants to save the world from her.

Lilith went to talk to Psimon again and she reports that he has perceived a global scale threat. H.I.V.E. has been stockpiling powers and building an army to stop it. Lilith says that the threat is her and she does not know if she is going to do or become Garth hugs her and tells her that they will stop whatever it is. Dick tells Garth to prep the jet. They are going to Delaware to meet the H.I.V.E. leaders face to face. Donna asks Wally if there is anything he wants to say and Wally starts to speak when the team hears a sound. H.I.V.E. reactivated the hardware to speak to them. It is a transmission asking the Titans for help, “its killing everyone”. The transmission goes dead. The Titans move.

At Rikers Island, Psimon starts to scream that it is beginning. The guards try to sedate him, but we hear the same sound and smoke and feathers that we saw the last time we saw Gnarrk and Mal.

Throughout these scenes, we find out that the letter Wally is writing is his resignation from the team due to his heart condition. He will help where needed but for now he wants to focus on being Wally West.

The team arrive at Lithgow, Delaware and find a disaster zone. The team land and move in. Dick tells Wally to take it slow because he is the heart of the team. Roy detects movement and they find Psimon and are attacked by Mal and Gnarrk with glowing purple eyes. Psimon is also there and he starts to transform. His outfit changes from his prison uniform to a black jumpsuit and he mentally attacks Garth and Lilith, which looks similar to Gnarrk and Mal. Mal squares off with Dick and stabs him through the chest. Wally races in and in the background we get an EKG reading that starts to show an increased heart rate. Dick finds that his wounds are healed and discovers that time went backwards. Wally stumbles saying that he went too fast. He does not know how he did it and we see the EKG flatline. Wally collapses in Dick’s arm with Mal, Gnarrk, and Psimon ready to finish Dick off. Next issue the traitor will be revealed.

Analysis: This issue definitively moves the story forward. We get the explanation that Dick was not a spy, but was infected with spyware which explains the cryptic panels at the end of last issue. We also learn that there is another villain who Mal and Gnarrk are familiar with, but has yet to be revealed to the readers.

This issue I believe has a lot of action, but it is crammed into the end. The benefit of this is that the action will bleed into the next issue. We get the team finally coming together and moving forward to attack H.I.V.E., but they learn that their true enemy is someone else, they just do not know who yet.

It was interesting to use Wally’s letter as a framing for the issue. It reaffirms Dick’s leadership and it addresses the difficulties that there are with being a leader. It also mentions the friendship that each of the Titans have for one another and that that friendship will pull them out of anything.

I liked that the attack on the team at the end was so unexpected and so quick. It was almost like a little foreboding lull and then as in a horror scene we get the jump of the attack with Roy being the first to be taken out. Karen also seems to have a recognition, but I do not think it was finding her husband as the plotting in the issue was alluding to.

The art here is great. I really liked the use of the EKG to show Wally’s heart stopping. I have a medical background and to me that art was very dramatic. I also enjoy the artists’ use of backgrounds. Nothing on the panel is wasted. We see the devastation, we see Mal’s blade dripping with blood and we see little things like a Flash statue on Wally’s desk.

Final Thoughts: This issue definitely makes me want to pick up the next issue. I really do not want to wait a month to see how this ends. It brings this arc up and I am expecting a satisfying conclusion. I do hope that this is not the last we will see of this Wally West.