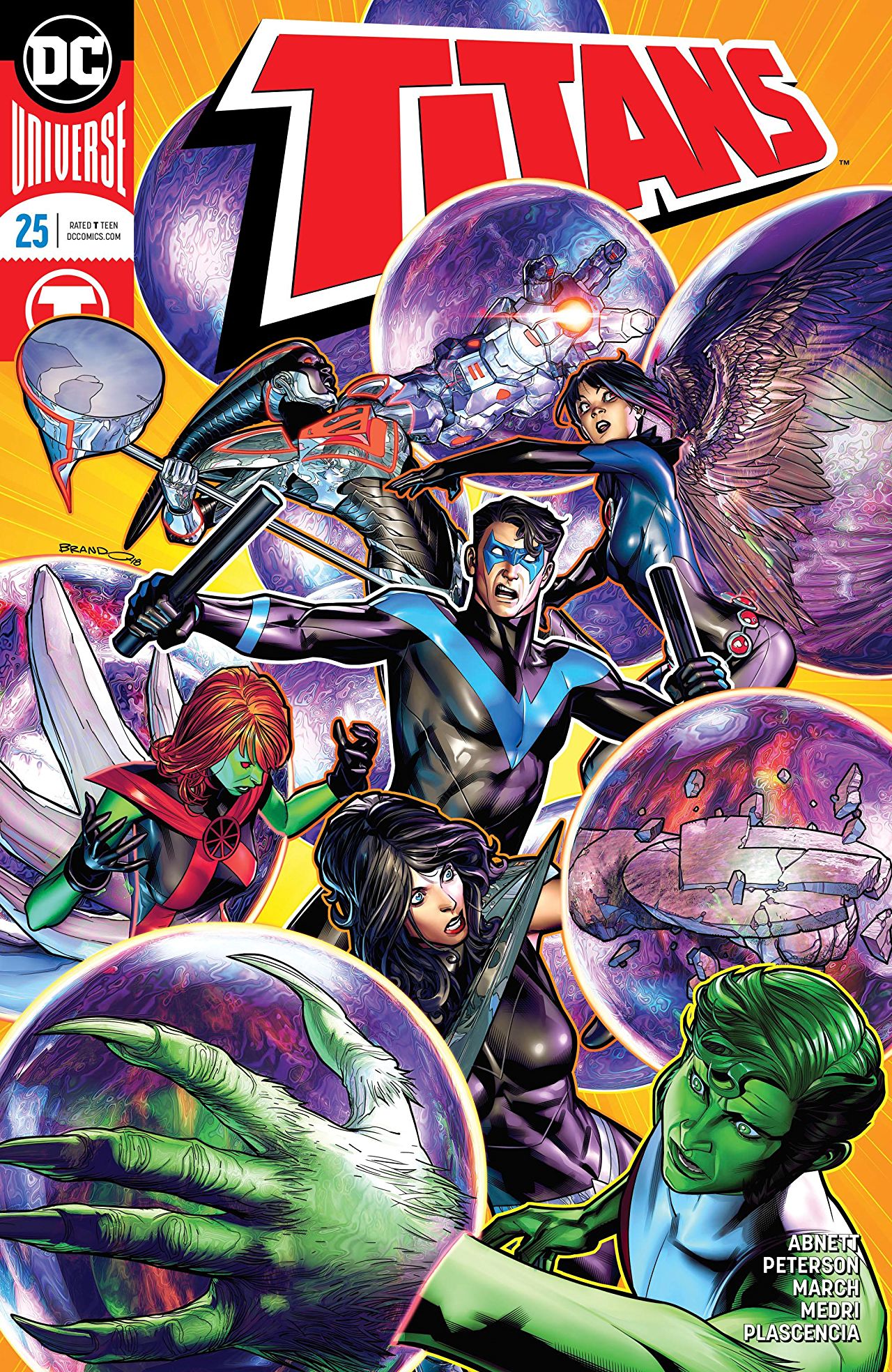 Overview: The team splits into three groups to deal with three new threats.

Synopsis (spoilers ahead): The issue opens with a giant robot destroying a city street which then cuts to the Titans meeting at the Hall of Justice.  Steel explains a new theory that the break in the Source Wall that has led to people manifesting powers is linked to negative emotions just as Nightwing and Miss Martian enter, still bickering about Nightwing resenting Miss Martian being on the team.  The trouble alert goes off and the team breaks into three groups to deal with three new threats.  Raven, Beast Boy and Steel head to downtown Washington D. C. to deal with the giant robot; Donna Troy heads to an alert in Bethesda; and Nightwing and Miss Martian head to an alert in Anacostia.  Raven shares over the mind link that she’s been feeling uneasy over the past few days.

In downtown Washington D.C., Steel, Beast Boy, and Raven face off against the giant robot, but it all goes wrong when Raven realizes her powers are gone.  Miss Martian and Nightwing arrive at an apartment building and find an old woman inside channel surfing, and before they know it they, they find themselves wearing clothes from the 1930s at a Casablanca-esque setting and realizing that they are somehow trapped inside the woman’s TV.  Donna Troy arrives at an abandoned factory in Bethesda and runs into a group of demon-masked ninjas working on a machine.

Back in D.C., Steel attacks the robot as Raven realizes that the core of her powers, her “soul-self”, is missing (which we saw was trapped in an alternate dimension at the end of Titans #24).  Nightwing and Miss Martian try to figure out what is going on as they begin to talk and act like characters in the movie they are in and they begin to dance.  The old woman changes the channel and Nightwing and Miss Martian find themselves in the Old West on horses being chased by bandits.  Donna Troy fights off the ninjas who turn out to be Brother Blood’s minions.  One of them hits the ground with his glowing sword, causing Donna to fall into darkness as the ninjas get back to working on their machine.

The team in D.C. continues to fight the giant robot as Nightwing and Miss Martian find themselves in a science fiction setting, with the two trying to fight off being consumed from becoming the characters they are playing.  Nightwing admits that he actually likes Miss Martina and the channel changes again back to the Casablanca like setting, with Miss Martian seductively laying on top of a piano as Nightwing plays.  Donna wakes up in some rubble and meets Ben Rubel, an investigative journalist who had been squatting in the warehouse and explains that Brother Blood’s goons were after his research.  Ben turns out to be the inventor of the machine the ninjas were working on, which collects energy from the source wall and Donna realizes that the machine must be shut down before it overloads and everyone dies.

The fight against the robot continues and Miss Martian and Nightwing talk about why they haven’t been getting along which ends in a near kiss as Donna Troy destroys the machine, which stops all three threats at once, destroying the robot and releasing Nightwing and Miss Martian.  The source of the giant robot turns out to be a child’s imagination brought to life and Donna Troy lets Nightwing know that the Blood Cult is active again and that the Cult appears to have had a run in with Robin and the Teen Titans.  The issue ends with the Blood Cult bringing Ben Robel’s notes to their new leader, Mother Blood.

Analysis: This is a book that is all about connective tissue, and is largely focused on tying up the subplot of the last few issues of the friction between Nightwing and Miss Martian.  The book tries to explain that Nightwing has been threatened by Miss Martian being forced on a team that he built and there’s a suggestion that she reminds him of Starfire, which all really doesn’t explain why he has been such a jerk to Miss Martian since she joined the team.

I’m of two minds of the wrapping up of this storyline.  On one hand, I’m glad it seems to be being put to bed.  I thought the whole plotline seemed out of character for Nightwing, as he has always been portrayed as a leader that values teamwork and he I don’t think he would reject Miss Martian’s inclusion so outright.   That being said, if you are going to introduce that kind of tension between characters, I think you have to do more with it then what’s presented here.  This issue kind of handwaves the tension as being Dick Grayson pulling on the pigtails of a girl he likes on the schoolyard and that does a disservice to both characters.  Putting them into a situation where their actions and emotions are influenced by an outside force also seems a bit of a cop-out.  If the writer wants them to almost kiss, it would be more genuine without that setting and it feels like this was done to have that moment without having to deal with the consequences of the two having feelings for one another.

I do like that Raven has not been replaced by an imposter, which is where I thought that the story was going to be going after the events of Titans #24.  Taking Raven’s powers away is an interesting idea that could have a great impact on both Raven and the team and it’s an interesting idea to explore.

The art in this issue is well done, especially the work of Brandon Peterson who I’ve always enjoyed, but having three different artists on a single book is jarring and it’s a shame there wasn’t one cohesive style to tie the book together.

Final Thoughts: I don’t particularly enjoy the Titans vs random imaginary friends direction that the book has taken.  I like this line up of characters, but I think that the writer is still figuring out what to do with them.  Nightwing is about to undergo some pretty big changes in his own title, so I have to wonder if the direction of this book is going to be taking another turn shortly.