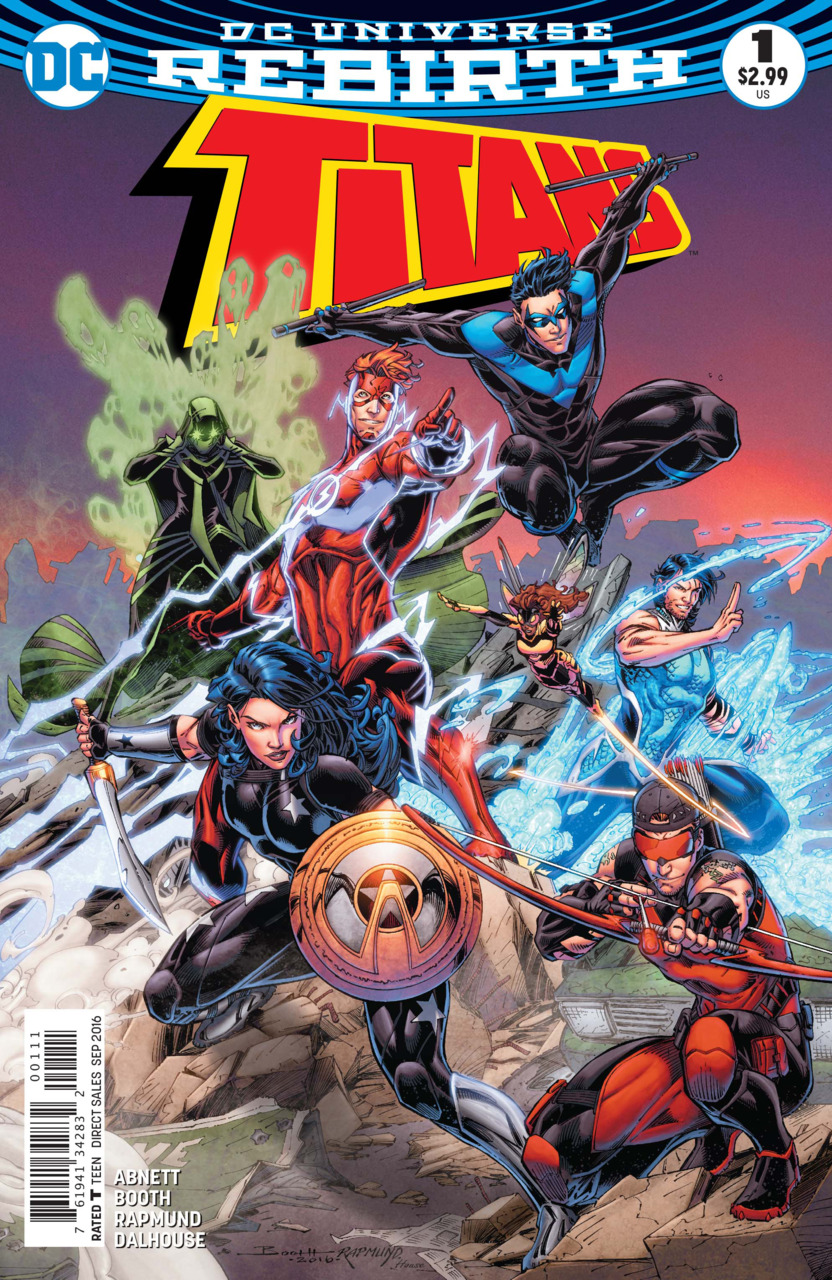 “The Return of Wally West Part 1: Run For Your Life” opens with a recap of DC Universe Rebirth. Wally describes his return from the Speed Force to find the universe timeline changed. His time as Kid Flash, then a Teen Titan and finally his love and marriage to Linda Park had been erased. He recounts Barry finally remembering him and bringing him back to reality. Barry suggests that Wally change his costume because he is no longer Kid Flash but a Flash. Wally used the Speed Force to reweave the molecules of his suit to make a new Flash costume that he first appeared to the Titans in.

In the present, Wally is talking to Lilith Clay, code named Omen. She is trying to find his memories. She searches his mind and finds the name of Linda Park. Garth and Roy tease Wally while Donna says that she thinks it is sweet that he is remembering his lost love. Dick wants to keep pressing into Wally’s mind to find an edge against whatever they are up against. Wally remembers when he appeared to Linda but terrified her when he appeared.

We move to Keystone City to Linda Park. She is a reporter for Super News, a web news source. She is remembering her surprise encounter with Wally the man who she has never seen before who looked like the Flash. Her initial fear now has become her search for her big story and her chance to make it to the big time. She really wants to know who the man was because she does not like being afraid and not knowing.

Back at Dick Grayson’s loft in Gotham Garth, Roy, and Donna reflect on the vague threat they are facing. They muse about giving it a name and tease Garth for wanting to call it Keeblu, after a dolphin he once know who he says was mean. Garth thinks that they may have tangled with this threat before when it took on the form of Mr. Twister. He enchanted them but he also enchanted Mammoth. Dick agrees that Garth may be on to something. Roy goes to check on some leads with the drug gangs in the Bowery. Meanwhile Lilith will try another look into Wally’s head.

Roy arrives at the Bowery and attacks the gang. One kid with a shotgun takes aim behind Roy and he is stopped by the sudden appearance of Donna Troy. Before she takes him out, he says that Mammoth now works for Psimon. We see that Donna and Roy do not know who Psimon is by calling the guy “Simon”.

Donna questions Roy about his knowledge of where to find this gang. Roy admits that he used to be a user and a dealer himself. He now has kicked it but he wants to make sure that nobody else has to kick it either.

Back at Grayson’s loft, Lilith continues to probe Wally’s thoughts. Roy and Donna return with the information and some pizza. Lilith then starts to read a presence but she loses it. Donna and Roy start to go off to track down “Simon” the old fashioned way when Lilith stops them. She felt the presence she detected before. She thinks she reached so deep inside Wally that she detected someone else. The mind is closed and shuttered with no memory. She woke it up and now they have to go to Keystone City.

In the suburbs of Keystone City, a bad magician is performing at a boy’s birthday party. The man starts to feel dizzy and then he changes into someone else entirely. He has remembered who he is. The boy says that magic is dumb and he wanted to go to Space-World. The new magician teleports the party to the moon and then back to earth again before the people die of lack of oxygen. The people start to applaud mainly out of fear. Now the magician realizes that everyone has forgotten him and tells the party goers that his real name is Abra Kadabra, the greatest magician of all time. He made Wally West disappear and now he is going to destroy him. Next issue Vanishing Act.

As a set up issue this was okay. I did feel that it dragged a little with Lilith probing Wally’s memories but it appears that she may have awakened Abra Kadabra. The question I see is, are they going to point to the loss of time to be caused by Kadabra or is this just a wild goose chase. I am still interested in where this is going but I have a fear that it may be a romp through Wally West’s old foes and after a while that formula will get an little boring.

I do have a problem with some of the characterizations. Particularly with Donna Troy. She just does not seem to be the same character I saw back in Titans Hunt. She is more jovial and together all the Titans seem to be written juvenilely which I did not enjoy seeing.

It is interesting that we are seeing the return of Roy Harper to being a former drug user and not just the alcoholic he was portrayed as in the New 52. I find that to be a positive move.

Overall, the issue was better than average. I still have hopes, but some reservations.