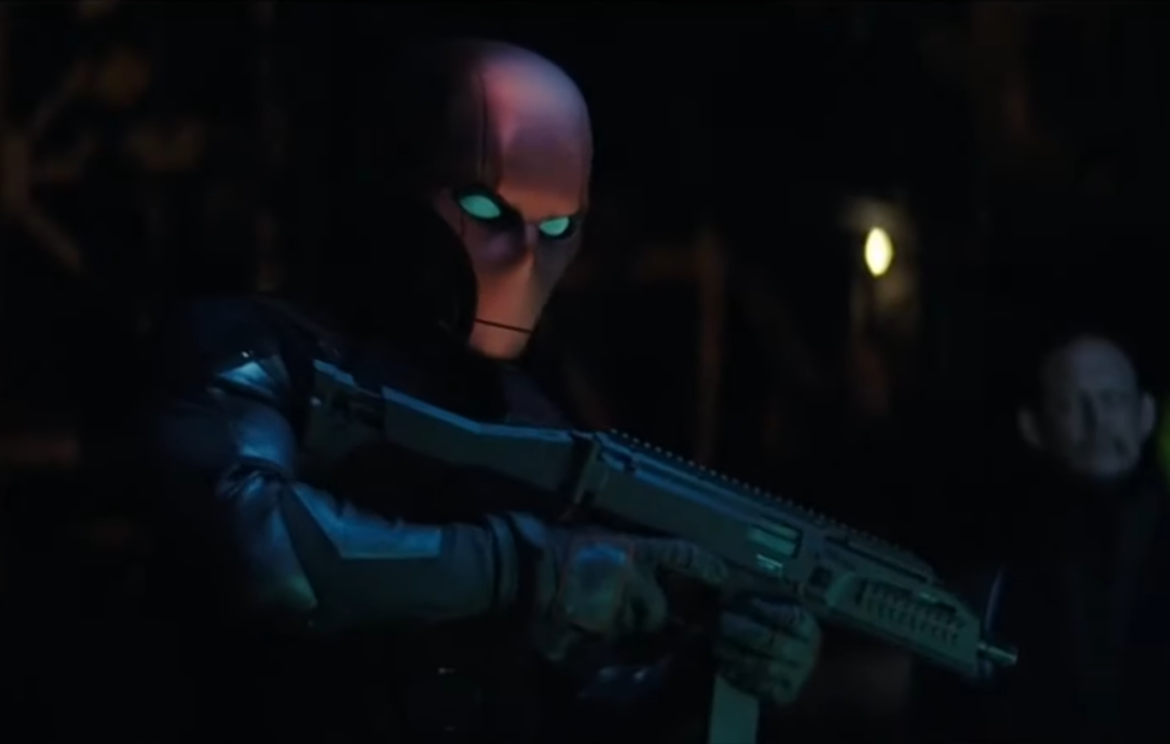 Overview: Titans episode #302 sees Red Hood arrive and ready to kill. With Batman gone, the Titans move to Gotham to fight this new threat. An old enemy becomes a new ally and points the team to the new enemy, who is an old ally.

Synopsis (spoilers ahead): Red Hood confronts a gathered group of criminals. He murdered their lieutenants and demands forty percent of their earnings in exchange for his protection. In DC, Hank is a bike cop while Dawn continues fighting crime as Dove. Dick meets Barbara at GCPD and she confirms that Joker is dead. Bruce has disappeared and Dick tells Barbara what happened the night before. He tells her he’s bringing the Titans to Gotham.

After the Titans arrive, Barbara calls Dick back into the station. GCPD has Ann Williams in custody. Ann blew up an ATM at the command of her daughter’s kidnappers. Security footage shows her wearing a red hood as she leaves the bomb. Dick remembers that Joker wore a red hood at the start of his career. Ann has a note requesting to see Nightwing on the back of a textbook page. Nightwing interrogates Ann. She shows him a tattoo of a phone number on her arm. Barbara dials the phone number and Ann screams for them to stop before snapping her own neck.

Back in her office, Barbara tells Dick they found Ann’s kidnapped daughter also wearing a red hood. Ann had a chemical delivery system implanted in her arm with some sort of “nuclear bath salt.” She tells Dick they have a consultant for cases like these: Scarecrow. Dick meets Dr. Crane in Arkham and Crane reveals that Ann’s note was written on a page torn from a chess manual. The move described on the back of the note is Bird’s Opening. Using the moves of Bird’s Opening, the Bat computer indicates the pieces moved to spell out Robin. Dick sees the pattern and searches for Gotham streets with bird names. Using the numbers of the chess moves and the street names, the Titans investigate addresses indicated by the clue but each home is empty. Dick knows they are too late.

Barbara calls Dick to assist with a bank robbery involving red hoods. Dick explains to Barbara that the robbers are just parents of kidnapped kids and convinces her to call off the police so the Titans can defuse the situation. While Hawk, Dove, Starfire, and Nightwing enter the bank, Gar and Connor search for the missing kids. They find the kids, but also their parents. The robbers in the bank are actual criminals and set off non-lethal explosives in order to escape. After they escape, Barbara tells Dick that protecting Gotham is a police matter. She could no longer trust the Titans.

In the Batcave, Gar and Kory play chess to better understand Bird’s Opening. Gar realizes that the answer is in the chess defenses against Bird’s Opening. One defense leads to the team investigate the Hobbs Powder Group building. While the Titans dispose of the surrounding henchmen, Nightwing confronts and fights Red Hood. During their brawl, Nightwing damages Red Hood’s helmet, revealing the man inside is really Jason Todd.

The Batman Universe Connections: Red hood is all over in Titans episode #302, properly titled “Red Hood”. Curran Walter’s iteration of Red Hood is both angry and violent, but much more of a villain at this point than an anti-hero. Hopefully, that side will develop as the season continues. The costume is comic accurate and translates very well to the screen. How he is alive has not yet been revealed and at some point, the show needs to address this question.

The Red Hood origins prior to Jason are teased throughout the episode. When Ann Williams dons the red hood before blowing up the ATM, Dick notes that Joker wore a red hood at the beginning of his career. Evoking the story from The Killing Joke, Dick believes there is a copycat Joker. While they are not adapting that particular storyline, it is a great nod to the comics.

In addition to Jason Todd’s Red Hood, we get the first appearance of Dr. Jonathan Crane. Vincent Kartheiser’s performance as Crane is absolutely mesmerizing. Best known as the jealous, wimpy, and privileged Pete Campbell on Mad Men, Kartheiser brings a calm insanity to the character. Crane resides in Arkham in a wing all to himself and self-medicates with marijuana to slow his mind. There is an incredible gravity to his character. Hopefully, he is featured regularly this season.

We get our first look at Arkham and it’s just fine. It’s not as dark, mysterious, or foreboding as in the comics or other media. Since Crane is housed with no other inmates, there’s also a missed opportunity to see other Batman rogues in their cells. Fan service, yes, but it would have been nice.

Lastly, there is a growing tension between Dick and Barbara in Titans episode #302. In a conversation with Hank, it’s revealed there is a past romantic connection between them. Of course, Dick’s had romantic connections to nearly all of the women in the show so far, but this one is worth keeping an eye on. Both Dick and Barbara are living in the shadow of a prominent father figure yet are approaching it differently. Barbara continues her father’s legacy by holding the same office he did. Dick continues Bruce’s legacy by creating his own. They present a nice contrast.

Introducing both Red Hood and Scarecrow in one episode proves Titans is improving on the pacing of seasons’ past. Both villains are handled well, though the revealing of Jason Todd behind the red hood falls a little flat since any fan worth their salt already knows the twist from the comics, but for the sake of the story it works. Kartheiser’s Crane bumps my rating from 3.5 to 4.