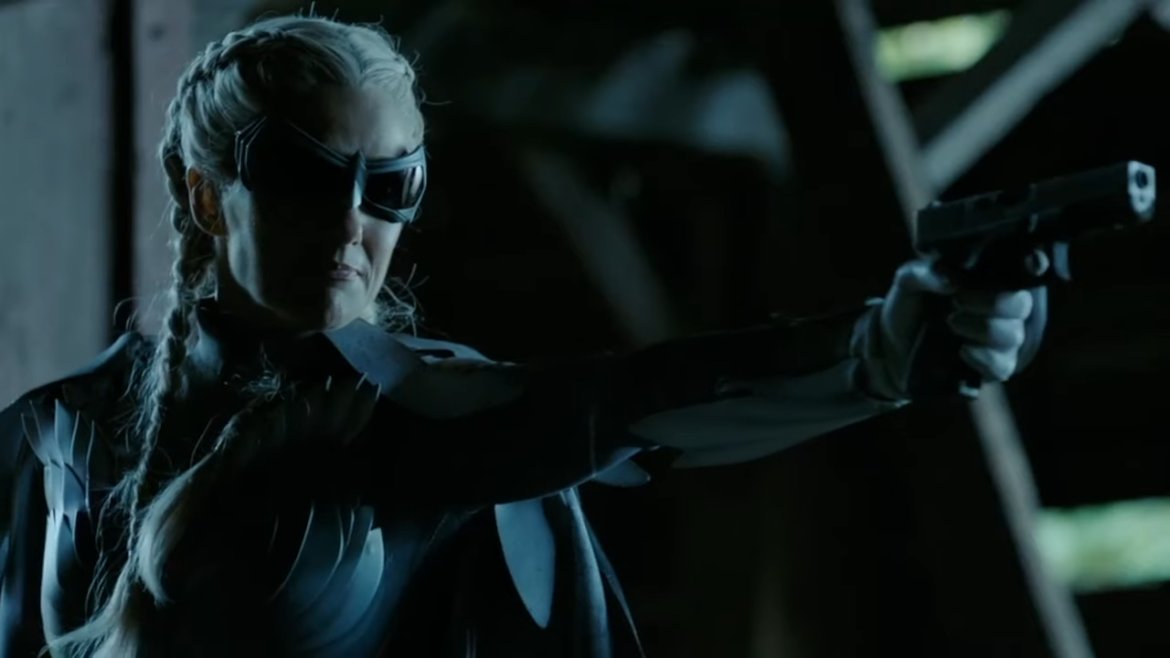 Overview: Is Jason really alive? Yes, but how he’s alive doesn’t matter because the team must track him down in Titans episode #303 before Hank’s heart explodes. Conner works on a solution at light speed while Dick and Dawn take different approaches to save Hank. Is it time to say goodbye to another Titan?

Synopsis (spoilers ahead): Having dug up Jason’s grave and confirmed it’s empty, Dick and the team decide that finding and stopping Jason is more important than figuring out how he’s alive. Jason calls Hank begging for help and asking to meet. Hank follows Jason’s directions and arrives at the abandoned Gotham City Gym where Red Hood knocks him out. The Titans are in the Batcave trying to figure out where Hank disappeared to when Hank walks in with a device implanted in his chest. Conner examines it using his X-ray vision and discovers that the device is a bomb. The bomb has a countdown not of seconds, but of heartbeats. There is no way to extract the bomb without igniting it.

Jason calls Dick and demands $50 million in gold bars in exchange for the deactivator. Dick focuses on trying to find Jason instead of finding gold bars. He consults with a bong-smoking Jonathon Crane again. Crane theorizes that Jason is trying to rebel by using the weapons of the father against the father. Dick returns to the Batcave and has Gar and Conner search to see if the device is Wayne Tech, which it is. Dick tasks Conner with inventing a device to disable to bomb before it explodes in three hours.

Kory and Barbara review security camera footage of the morgue at GCPD the night of Jason’s murder. They discover a man with a baseball cap wheeling out Jason’s body on a gurney. They identify the man as Cyrus Beake. Meanwhile, Dove hijacks an armored car at Jason’s command hoping to defuse the situation by appeasing Red Hood. Dick visits Beake’s address but Jason tosses Beake’s body onto Dick’s windshield. Jason calls Dick, who demands to see him face to face to bring everything to an end. Jason texts him an address.

Dove meets Red Hood with the hijacked gold bars. She demands the deactivator and Red Hood gives her a gun. He is holding the deactivator and all she has to do is shoot him. Once his thumb leaves the button, Hank is safe. Nightwing arrives and tells her that Conner is close to finishing a deactivating device, but the countdown is drawing down quickly. Just as Conner finishes, Dove grows impatient and pulls the trigger. The gun clicks, but doesn’t fire. Red Hood tells her that he gave her the trigger to the bomb. Conner races to Hank to deactivate the bomb but is too late. The bomb triggers and explodes in Hank’s chest. Dawn collapses in Dick’s arms, knowing she has killed Hank.

The Batman Universe Connections: Some negativity first. How dumb is Bruce Wayne? If Jason’s casket is delivered to Wayne Manor empty, would Bruce have not either looked inside or noticed the weight of an empty casket? Would Batman really be dumb enough to bury an empty casket? And how is a casket delivered to Wayne Manor from GCPD after Robin is publicly killed with no questions asked? It’s a good thing Bruce is off the radar because the series doesn’t seem to understand the character. Now onto some positives for Titans episode #303.

When Dick digs up Jason’s grave we get a glimpse of Alfred’s gravestone. The date of his death is 2020. Alfred’s death is still fresh in this world, perhaps adding to Bruce’s erratic grieving process. I wish they would have paid homage to Alfred’s death by putting 2019 on his gravestone (the year he died in the comics), but it is helpful to understand how long Alfred has been gone.

Ra’s al Guhl gets a quick mention in Titans episode #303 by Dawn as the team discusses how Jason came back to life. In the comics, Talia al Guhl restores Jason’s health using a Lazarus Pit. With so much unresolved death (Donna’s got to come back somehow), a Lazarus Pit resurrection makes sense. It would also explain the change in Jason’s personality. Dick quickly dismisses Ra’s as helping Jason, informing Dawn that the Head of the Demon is in Khadym, the Middle Eastern home of the League of Shadows. No dips in the eternal pool for the Titans.

Wow. Titans #303 does not disappoint! The explosive conclusion is built up in a way that you never expect the team to fail. Yet that’s exactly what they did. Hank’s dead, but don’t expect a Jason-esque resurrection for Hawk. Showrunner Greg Walker just turned the stakes up to 11. Red Hood is turning out to be a great, ruthless villain for this season. The incendiary ending blows my rating up to 4.5.