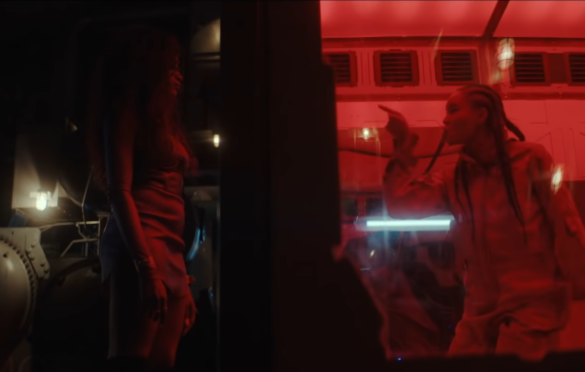 Overview: In Titans episode #304: Blackfire, Hank is dead, but only Dawn and Conner seem to care. Kory and Gar go on a side adventure while Dick baits a trap for Red Hood with Scarecrow.

Synopsis (spoilers ahead): While receiving medication, Jonathan Crane is attacked in Arkham at the command of Red Hood. At Wayne Manor, Conner mourns his inability to save Hank while Dawn says goodbye. Dawn tries to get Dick to leave Gotham with her, but he refuses. Barbara Gordon tells Dick that Crane will be transported to Blackgate Penitentiary.

Meanwhile, Kory attacks Gar while in a trance. Gar believes he can help Kory discover the meaning of her visions by clearing her mind in Bruce’s sensory deprivation chamber. Kory enters her vision again and sees her sister, Blackfire. She wakes up from her trance in a field in her Oldsmobile Toronado. She trapped Gar in the trunk and drove to this undisclosed location while seeing her vision. Together they discover a hatch leading underground.

Inside, they find Blackfire in containment and a single government contractor tasked with keeping her there. Kory and Blackfire have a discussion that devolves into combat. Kory decides to abandon her sister with her captor. Asking the contractor what will happen to Blackfire, he confirms that she will remain in containment until she dies. Kory and Gar decide to free Blackfire.

Dick believes Red Hood coordinated the Arkham attack to get Crane transferred to another facility, thus providing an opportunity for him to capture Crane in transport. At Arkham, Dick subdues guards as they attempt to move Crane. He takes Crane to a cabin in the woods where Bruce trained him and Jason as boys. Dick knows Jason will come for Crane because he can’t help himself. Dick confronts Crane about Jason, and Crane admits that he rebuilt Jason. They discuss at length the role of fear in Bruce’s training and in Dick’s intentions in Gotham. While Crane depicts Dick as the victim of fear, Dick proves that he became the victor over fear in his own training.

The Batman Universe Connections: With more focus on Gar and Kory, there are fewer connections in Titans episode #304 than in previous episodes. Blackgate Penitentiary is named as the transfer destination for Dr. Crane, but it is not shown.

Vincent Kartheiser’s depiction of Johnathan Crane was intriguing but is slowly morphing into a generic snarky bad guy. If the viewer didn’t know he was Scarecrow, it would be difficult to distinguish him from any of the other genius-level Batman rogues. His discussion with Dick in the cabin centered on fear, but he comes across not as obsessive over the effects of fear on Dick but rather as a sympathetic counselor.

Dick himself proves to be the master over fear in his retelling of his experience in the cabin. The story of Dick running alone in the woods being chased by a wolf leads Crane to believe him to be nothing but a scared little boy. As Dick finishes his story, which ends with him beheading the wolf, he notes that he shouldn’t have been afraid of the wolf, but the wolf should have been afraid of him. Dick is the wolf slayer, imparter of fear, and Crane looks to be the scared little boy.

The reveal of Scarecrow transforming Jason into Red Hood raises more questions than it answers. While we now know the big bad behind the big bad, we still don’t know whether Jason actually died and, if he did, how he came back to life. We also don’t know how Crane was able to drastically change Jason’s personality and intelligence within a matter of days. Scarecrow being behind Red Hood simply does not make sense, at least at this point in time. Hopefully, there is still more explanation to come.

Though season three has been a rollercoaster so far, episode 304 feels more like the teacup ride. With Hank and Donna dead, Dawn out of the picture, Conner of no good use, and Rachel presumably in Themyscira, there’s only three Titans left standing against Red Hood and only one actually pursuing him. This episode feels like a stumble and returns to the slow pacing of seasons past. Perhaps they should not have railroaded through the Death in the Family and Under the Red Hood storylines in the first two episodes. There was a lot more meat left on those bones.