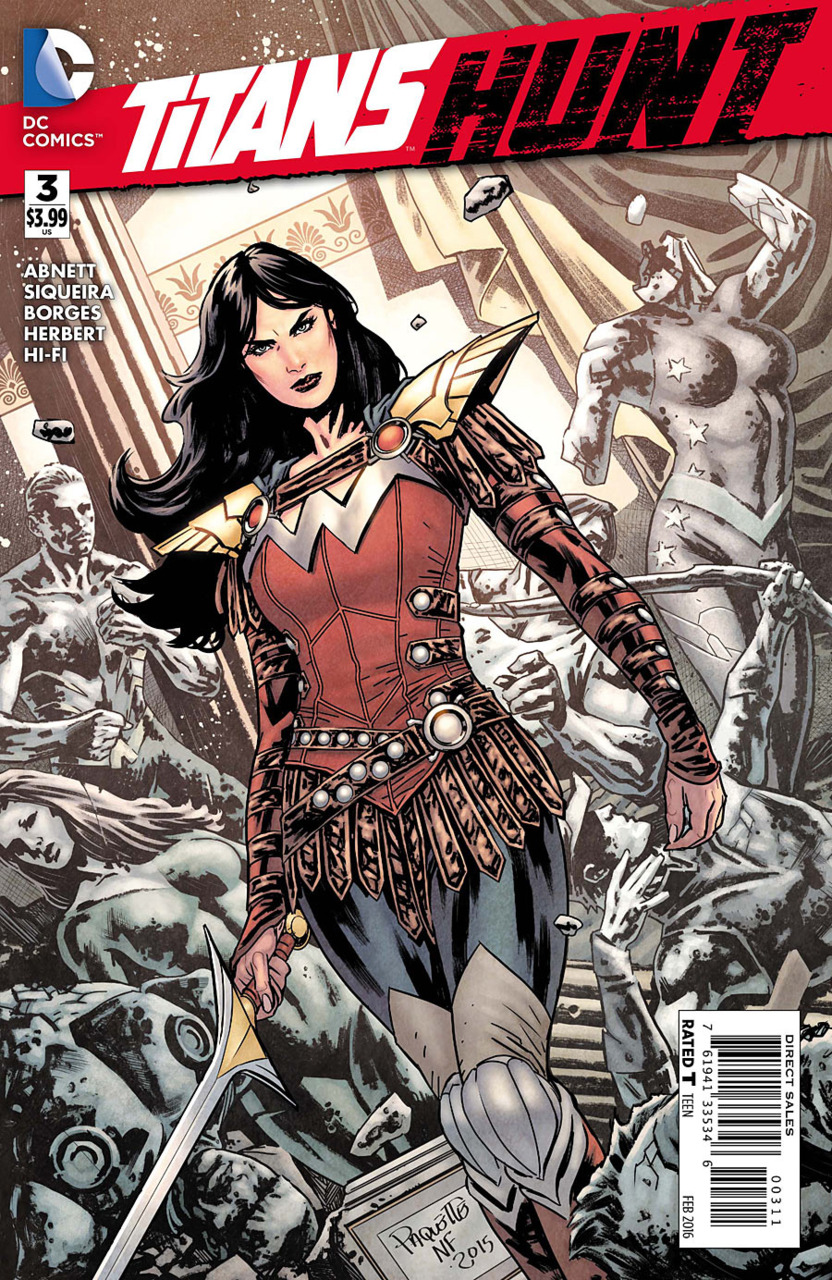 “Titans Hunt Chapter Three: Friends Like These” opens where the previous chapter ended. Grayson, Donna Troy and Aqualad fighting on the beach. All three want answers and the Amazon believes Grayson has them. She attacks him demanding answers.

At Lilith Clay’s office, Lilith is working late. She is desperately trying to get in touch with Roy as she is his addiction counselor and he is not answering. Soon she realizes she is not alone. The apparition we saw in the previous issue is there. The villain is using Lilith against her will to gather the former Titans. It orders her to use the Herald to sing out and bring them to it. We close the scene with Lilith alone on a chair holding her head.

Back at the beach the fight continues. Dick realizes that he does not have a chance against an Amazon and an Atlantean. He retreats to an old shack just as the Amazon is thrown through the wall. All three find out that they are in what is labeled the Teen Titans Club House.

Mal is at Clarion Studios working on his latest sound track project. He is talking on the phone with Karen. She is trying to find out where the shadow in the photo from the previous issue came from and what was it. He hangs up with her and continues the rehearsal.

At the jail, Roy is trying to get his phone call. The guard wonders if Roy is a member of gang with his tattoos and his bow. The guard hears a crash and goes to investigate. The guard does not return, instead Gnarrk returns with Roy’s bow and quiver. Gnarrk notches an arrow and releases it at Roy in the cell. Roy catches the arrow with his hands and Gnarrk calls Roy, Speedy. Gnarrk unlocks the cell and the two go for fate is waiting.

At the shack the three realize that they know each other’s names. Donna also knows Dick as Robin.

At the rehearsal, Mal suddenly hears a sharp sound and collapses. Lilith hears the sound in her office. Gnarrk and Roy also hears the sound. The three at the shack hear the sound. We see the apparition declaring that they all heard that.

The issue closes with Hawk and Dove. Hawk has heard the sound but not Dove. Next fight of flight, war and peace and Hawk and Dove.

This issue continues the assembling of the characters. All of them begin to realize that they know one another and that those memories have been repressed. We still do not learn what the apparition is or what it really wants other than these characters. We close with the introduction of Hawk and Dove. Both Hawk and Dove were members of the Teen Titans in the past but it was not this Dove but Don Hall who was a member. That is probably the reason Dawn Granger, this Dove does not hear the sound.

This issue was an enjoyable read but it was not as packed as the previous issues have been. We get more action in the fight at the beach and we see Dick thinking before he punches somewhat. He is able to realize that he cannot take both an Amazon and an Atlantean so he falls back. This does allow for all three to find the clubhouse.

Overall, I am still enjoying this story.