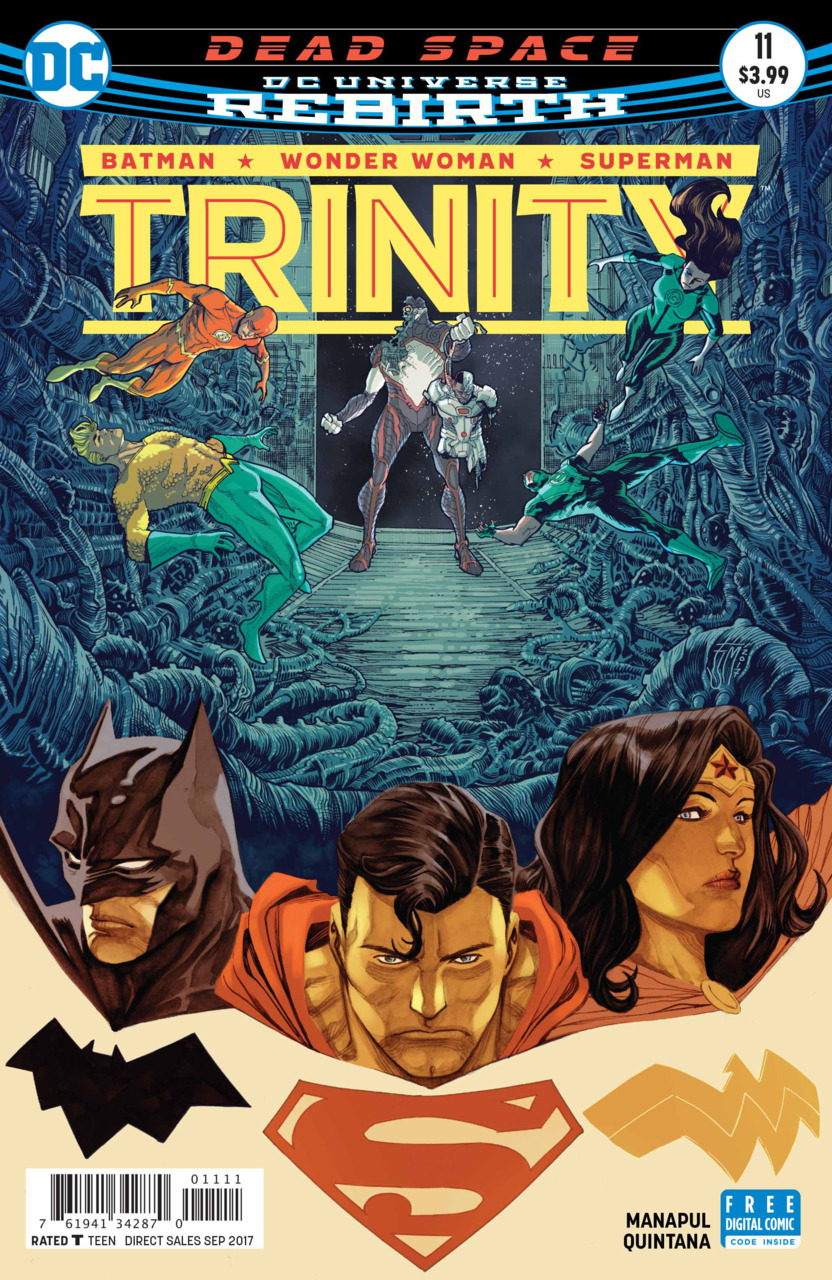 Overview: Culminating in a final showdown aboard the falling Watchtower, the Trinity fight off the Traveler and release the symbiotic aliens, The Enlightened, from his control.

Synopsis (spoilers ahead): Picking up right after Wonder Woman had become infected by one of the parasitic aliens, we see her become engaged in a fight with the Traveler. Despite being infected by the alien, Diana is able to break through the aliens barriers and reason with it. She offers to help the aliens after seeing how they were the real victims at the hands of the Traveler. United by a common threat, the pair attack the Traveler as one.

Meanwhile, Batman continues to try and save Cyborg from the mother of the alien creatures. The pair eventually are able to climb into an escape pod which is shown to have a power source independent from the Watchtower. Batman remarks at how he typically likes working alone but, as the creature attempts to smash its way into their pod, he admits he would not mind some help from Clark or Diana. As he attempts to jump start the pod so that it will charge Cyborg, the mother begins to break through the pod’s cockpit shield. As if things could not get more difficult for Batman, he notices a batch of alien eggs begin to hatch inside the pod.

Outside the falling Watchtower, Superman is trying to halt the tower’s descent. While holding back the ship, Clark also has to fight off both Green Lanterns Simon Baz and Jessica Cruz. The hold of the alien infection begins to wear off though as the heat of re-entry into the Earth’s atmosphere intensifies. As the pair of Green Lanterns finally gain control of themselves, they immediately faint and leave Superman to now hold them as well as stop the tower.

Although seemingly alone, Superman notes that he has come to trust in the power and help from others. Right on cue, Wonder Woman and Batman arrive to lend a hand. They realize the tower is on course to crash into the city of Mumbai. The Trinity steer the watchtower towards a LexCorp building where, with its anti-alien countermeasures, they are able to stop the falling ship. Atop the Watchtower, many of the freed alien creatures float into the night sky, lighting it along the way.

With the rest of the league now free, the heroes all assist in lifting the Watchtower back into orbit. After imprisoning the Traveler, the Trinity go to a remote location near the waterfalls from the first story arc and release The Perfect. Diana explains that these creatures were used to change the Enlightened into parasitic beings. The issue ends with White Mercy observing them from the falls and remarking how they have grown just as she has.

Thoughts: With the conclusion of this arc, I unfortunately can’t say that this was as good as an arc. Some of the inner monologues from each hero carried weight or gave us some nice moments for the character. However, the story as a whole did not really lend itself to a lot of character development. This seemed like just another adventure for the Trinity to come together and fight some aliens.

Certain plot points also fell flat in my opinion. The reveal of the Traveler being the evil one was really no surprise. Any new character that advocates for crashing of the Watchtower should really be surrounded by flashing warning lights and sirens. Another plot point that frustrated me was the actual aliens themselves. It became very convoluted in that they had a separate alien species as the reason for these grotesque creatures while the inner species was quite beautiful. I may have been the only one confused, but this distinction caused a lot of page turning (backwards) to make sure I understood which species Diana kept talking about.

Overall, the saving aspect to this issue was the artwork. Manapul’s soft, “warm” color tones and penciling makes each panel so much fun to look at and fills these stories with a real feeling of joy and adventure. In the end, that is the important thing when reading comics. Although a weaker story and writing, the art team delivered where this issue can at least be enjoyed visually.