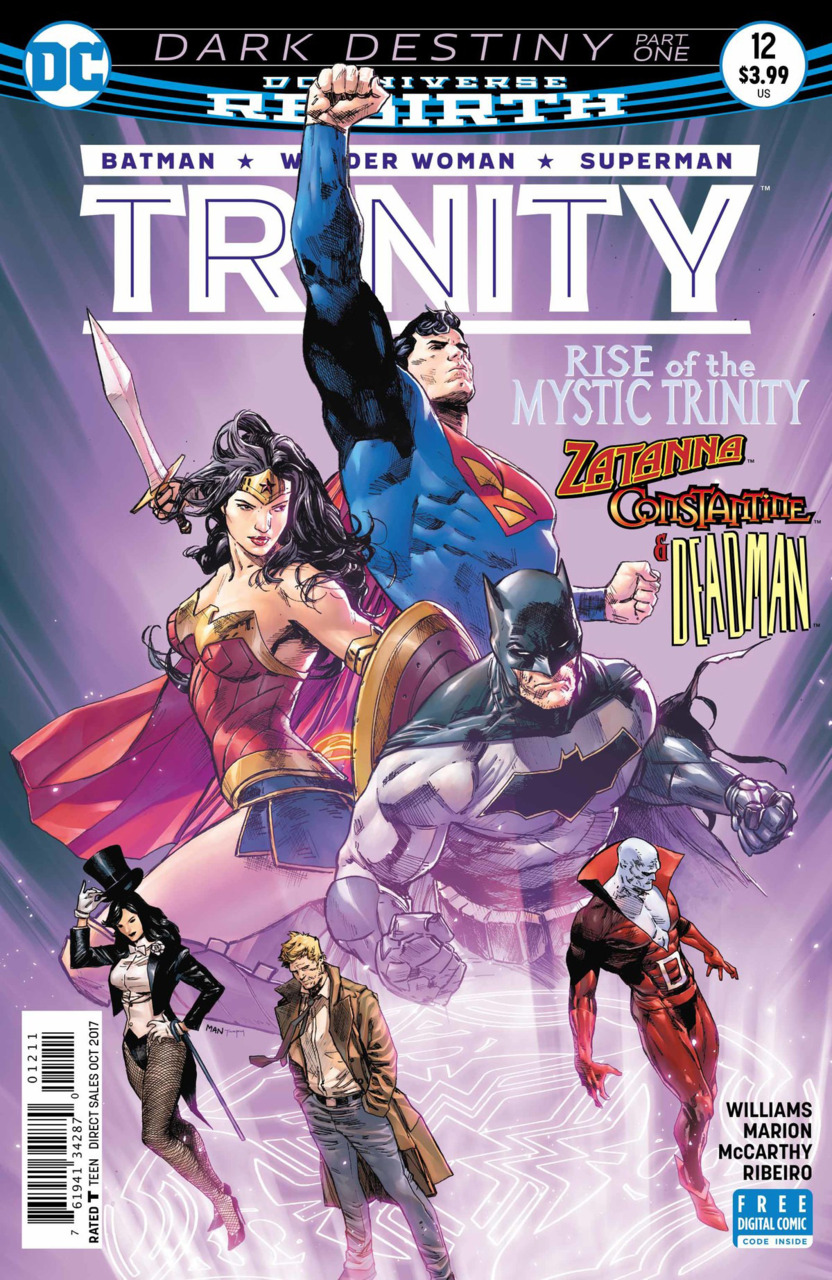 Overview: Continuing the story from Trinity Annual #1, the Trinity seeks help from a few supernatural allies to free Red Hood and the Outlaws from Circe’s magic.

Synopsis (spoilers ahead): Walking up to an old brownstone in the middle of Gotham City, a few members of Justice League Dark meet after receiving an invitation from Batman himself. It’s evident the new trio of magical heroes don’t exactly get along as evidenced by Zatanna’s almost immediate withdrawal once seeing Constantine. Only after Deadman arrives does the door open and Batman has them come inside to assist in a matter he and the rest of the Trinity are ill equipped to handle. Writhing and screaming on a table lies Red Hood but he is clearly possessed as shown by his gigantic fangs and new fan club composed of small red devils. His look and the red devils resemble the possessed Etrigan and his minions when he had been taken over a few issues prior.

The Trinity explain that they were attacked by the Outlaws but were only able to capture Red Hood. Deadman (AKA Boston Brand) offers the suggestion that he possess Jason Todd’s body and expel the demon from the inside while Zatanna awaits in the real world to trap the actual demon. The Trinity agree to this plan, but warn Brand to be careful. Joking that he is already dead, Deadman dives into the body of Red Hood. After a few short minutes, however, Deadman bursts out of the body and tries to free himself from the demon within Red Hood. Attempting to pull him free, Zatanna finds herself also entangled with the multiple demons and eventually pulled into Red Hood’s mouth.

Constantine tries to walk away, but the Trinity convinces him to do some good and try to help. After only a short conversation with the demon, he uses his own magic to open up the mouth of Red Hood. Just as he enters the possessed body of Red Hood, the rest of the possessed Outlaws arrive to fight the Trinity.

It’s shown in a quick flashback that Circe used the Pandora Pits to possess the Dark Trinity as they went to investigate and apprehend her and Ra’s al Ghul.

The issue ends with the demonic Red Hood saying that he is getting everything he ever wanted…to kill Batman.

Analysis: I should preface my overall critique here by saying that anytime a story comes up that involves magic, I tend to have less than favorable opinion on it. Within this issue of Trinity, I enjoyed some of the characters that I have been largely unfamiliar with like Deadman and Zatanna. However, as a Trinity story, I found myself disinterested and even frustrated at times.

The involvement of Deadman and Zatanna were a nice addition to this story and presented some fun dialogue. My only exposure to these characters has been within the DC animated series so it was nice to see them expanded in this story. Constantine has constantly annoyed me in many of the event books where I have encountered his character. He seems like an interesting enough character and he has many fans, but I just do not find myself very invested in the development of his character.

The story is something that I found to be hard to follow, especially as someone who has been keeping up with Red Hood and the Outlaws. This past issue was about Bizarro’s death and rebirth into a very intelligent Bizarro. Here we see the team seemingly unaffected by these events. With so much focus on continuity during Rebirth, this seems like a pretty big misstep for the story group.

Also, the overall idea of the “Dark Trinity” going up against the Trinity felt like a cool versus story, but I never really thought they had to incorporate magical manipulation into the reason why the teams had to clash. There is already enough controversial qualities of the Outlaws and how they operate as opposed to the well known Trinity to create a compelling story of the teams going head to head without the need to be possessed by some demon.

I have no complaints regarding the artwork here and really felt that V Ken Marion nailed the different facial expression of the “Mystic Trinity” to give them more humor and character. Coupled with some funny dialogue, I did think Deadman and Zatanna were standouts here in terms of the art.

Final Thoughts: I wish I could say that this issue has turned me around on how I feel about magic-based stories within the DC Universe, but I still can’t say I’m on board after this issue. With the continuity missteps along with a story that already felt complete after the Trinity fought a demon possessed Etrigan only a few issues ago, I have to hope that the creative team will deliver some truly compelling moments in future issues of this arc.