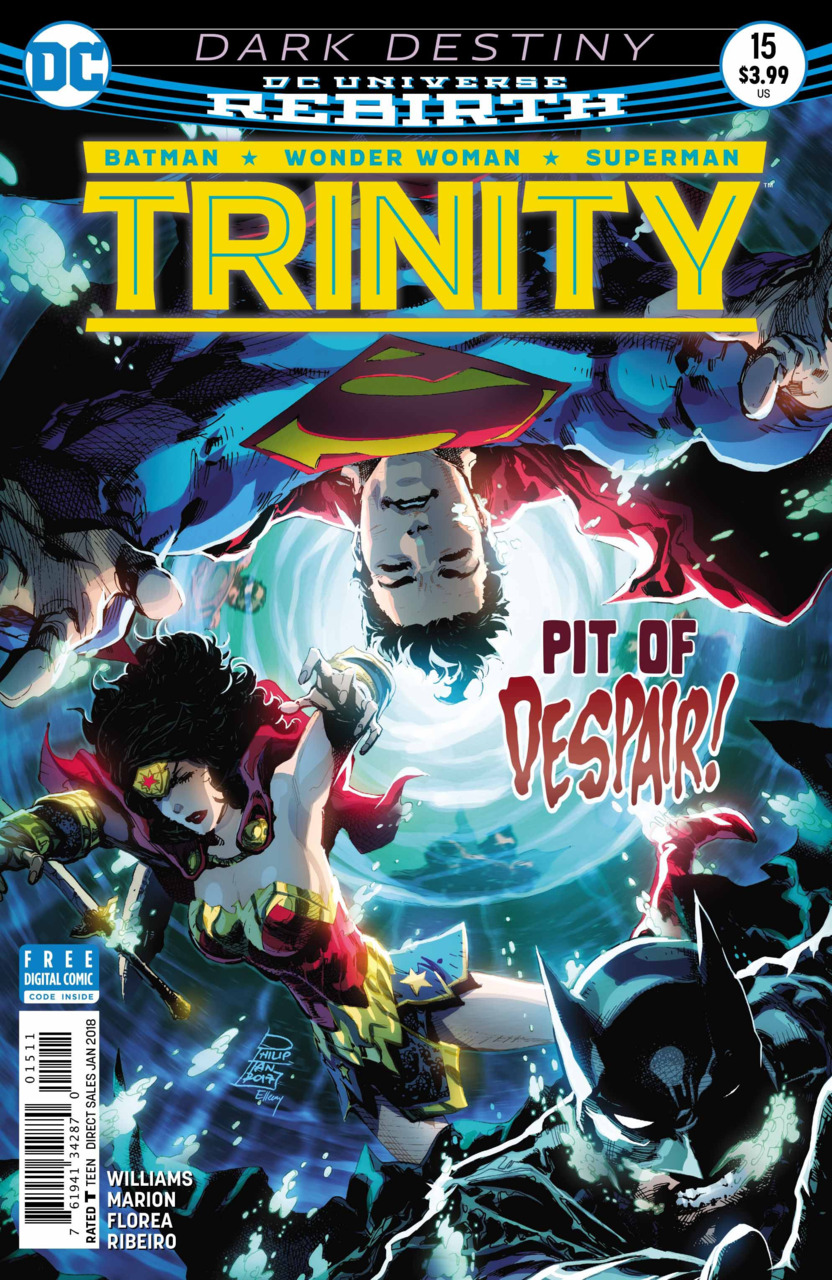 Overview: Batman leads a team effort to foil Circe’s desperate plan and save the day.

Synopsis (spoilers ahead): Circe is attacked by members of Ra’s al Ghul’s League of Assassins while she holds Superman, Wonder Woman, Deadman and Zatanna over the Pandora Pits. She quickly uses magic to overcome the attack and throw all the League of Assassins ninjas into the Pits. Circe then tells a dying Constantine that she will feed all the heroes to the Pits except for him because he has no soul. Constantine makes fun of her plan just as Batman and a fully cured Red Hood, Artemis and Bizarro crash into the cave via Batplane.

Red Hood and his teammates attack Circe and she counters their attack by using her Ani-Men to confront them. Batman reveals to Circe that he cured Red Hood and his team by temporarily stopping their hearts and then using defibrillators to shock them back to life. This works because the demonic possession leaves the host upon their death. Batman then uses some type from frequency gun to temporarily stop the hearts of all the heroes held in Circe’s control and return them to their normal selves. A quick fight ensues resulting in Circe being subdued by the combined efforts of all the heroes.

Zatanna heals Constantine just as Ra’s al Ghul emerges from the Pits and stabs Circe in the back as she is being led away. He throws her in the pit and somehow manages to escape in the ensuing chaos. Wonder Woman then dives into the Pits and retrieves Circe as Superman and Batman struggle to pull her out by tugging on her lasso. Their efforts are eventually aided by Red Hood, Zatanna, Constantine, Artemis, Bizarro and Deadman as Superman guarantees that no one will die today.

Analysis: Now that this arc is over, I have to say that I’m really disappointed in the overall story. Using so many of these iconic and dynamic characters should have resulted in a story that was much more coherent and impactful than this one. The final issue is supposed to tie everything together, but what we get here is a lot of stuff that doesn’t make any sense. This whole story arc started with an alleged prophecy about Trinities, and the concept of trios was used frequently throughout. In this issue, we find out that it was all sham because Circe’s plan really had nothing to do with Trinities in the first place. Since that is true, why didn’t Circe just send Superman and Wonder Woman to the Pits when she first got control of them? Even in this issue, she has control of them for a while but wastes even more time explaining her plan to Constantine. And if the story really wasn’t about different Trinities, then the presence of Ra’s al Ghul and mentioning Luthor were really superfluous to the plot.

Another part of the story that didn’t make sense is the convenient arrival of the League of Assassins. Circe is supposedly in a hidden location, but the League of Assassins somehow appear right after she has betrayed Ra’s al Ghul. Furthermore, they do not really serve any purpose other than to be thrown into the Pits two panels after they make an appearance.

Batman finding a scientific solution to cure demonic possession makes sense, but the way it was presented made no sense to me. Batman analyzes Red Hood in the Batcave and comes up with a solution. Why didn’t he do that the first time he captured Red Hood back in issue #12? The way he administers the cure to Superman, Wonder Woman, Deadman and Zatanna also seems a bit too easy. Also, how does the cure work on Deadman when he is just a spirit who doesn’t have a physical heart or body? And why would Batman bother explaining to Circe how he found a cure? It seems like the explanation is just in there to explain to the reader what happened off panel at the end of the last issue. Something that important should probably have happened on panel to avoid an awkward moment where Batman explains his plan for no reason.

The last part that didn’t make sense to me is the sudden disappearance of Ra’s al Ghul. The cave is crowded with the Trinity, Red Hood and the Outlaws, Zatanna, Constantine and Deadman, and somehow Ra’s al Ghul manages to sneak away despite being out in a wide open space. Actually, I can’t be sure that Red Hood and the Outlaws are in the cave because, right after Circe is subdued, they don’t appear in a single panel until the very last page of the issue. However, I presume they are there because there isn’t any reason as to why they wouldn’t be.

The art is more of the same good work that we have been getting for the whole arc. There is an excellent attention to detail and the colors give each character on every page a unique energy. V Ken Marion continues to draw excellent Bat-vehicles as his version of the Batplane is both stylish and powerful. The panel of Batman right next to his explanation of how he cured Red Hood from demonic possession is incredible and evokes a similarity to some of the classic Jim Lee versions of the cowl. In my opinion, V Ken Marion did a good job in this arc and I’d like to see him get a chance to work on the Superman or Wonder Woman solo title.

Final Thoughts: A lot of the fun character moments present in previous issues are absent in this final issue. There are also numerous plot holes and inconsistencies that make this issue get a lower rating than it should get. I hate to give such a low rating because I really appreciate the incredible amounts of hard work and dedication that comic book creators have to put in, but I really feel like there are some glaring problems with this issue and story that I cannot ignore.